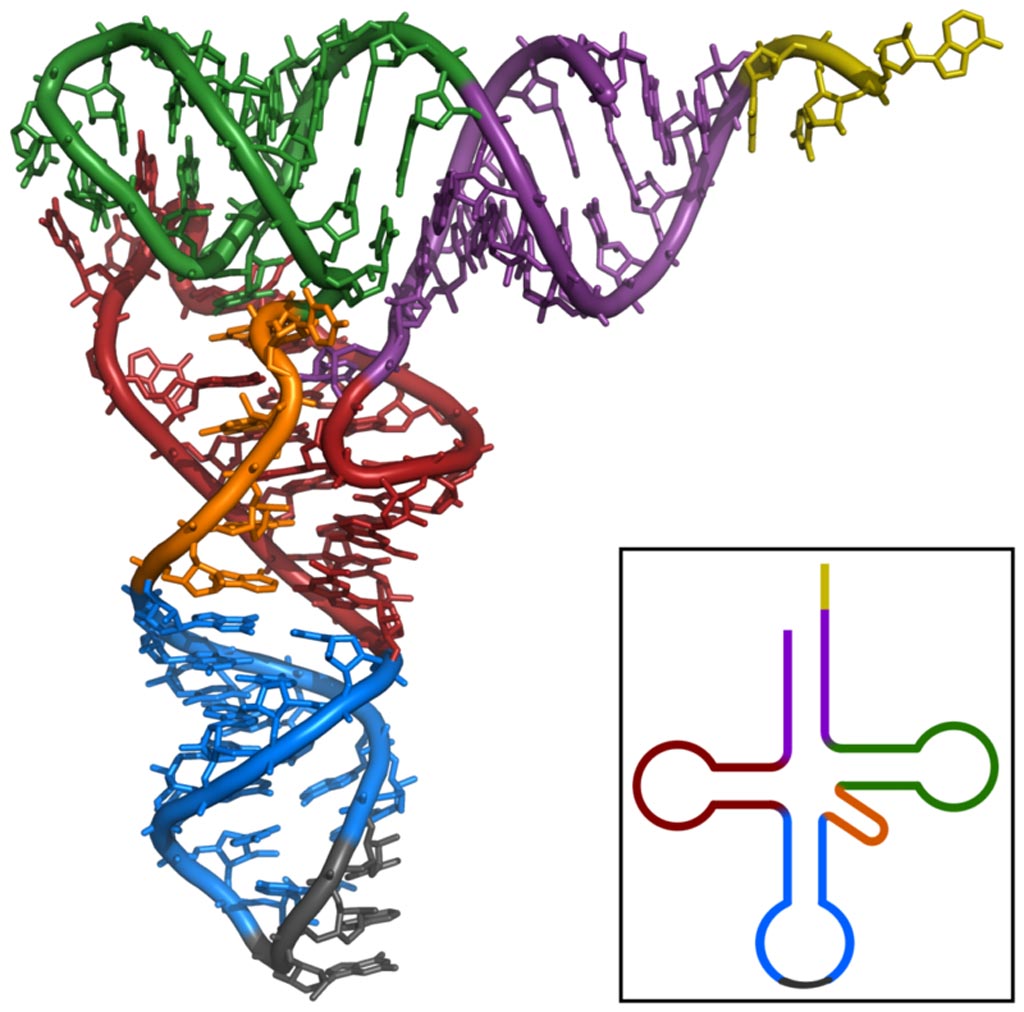 : A tertiary structure of transfer RNA (tRNA) (Photo courtesy of Wikimedia Commons).
Elevated levels of stress-induced fragments of transfer RNA in the blood may serve as biomarkers that indicate potential for an epileptic seizure hours before the event actually occurs.

A transfer RNA (abbreviated tRNA) is an adaptor molecule composed of ribonucleic acid, typically 76 to 90 nucleotides in length, which serves as the physical link between the mRNA and the amino acid sequence of proteins. tRNA does this by carrying an amino acid to the protein synthetic machinery of a cell (ribosome) as directed by a three-nucleotide sequence (codon) in a molecule of mRNA. As such, tRNAs are a necessary component of translation, the biological synthesis of new proteins in accordance with the genetic code. When cells are stressed, tRNAs are cut into fragments.

Investigators at the Royal College of Surgeons in Ireland (Dublin) and the related biotech company FutureNeuro (Dublin, Ireland) proposed that higher levels of tRNA fragments in the blood might indicate that brain cells were under stress in the build up to a seizure event.

The investigators designed PCR-based assays to quantify tRNA fragments in a cohort of pre- and post-seizure plasma samples from focal epilepsy patients and healthy controls. Analysis of the results indicated that tRNA fragments potently distinguished pre- from post-seizure patients. Furthermore, elevated tRNA fragments levels were not detected in patients with psychogenic non-epileptic seizures, and did not result from medication tapering.

"New technologies to remove the unpredictability of uncontrolled seizures for people with epilepsy are a very real possibility," said contributing author Dr. David Henshall, professor of molecular physiology and neuroscience at the Royal College of Surgeons in Ireland. "Building on this research we in FutureNeuro hope to develop a test prototype, similar to a blood sugar monitor that can potentially predict when a seizure might occur."

The tRNA biomarker study was published in the April 30, 2019, online edition of the Journal of Clinical Investigation.

The Royal College of Surgeons in Ireland
FutureNeuro