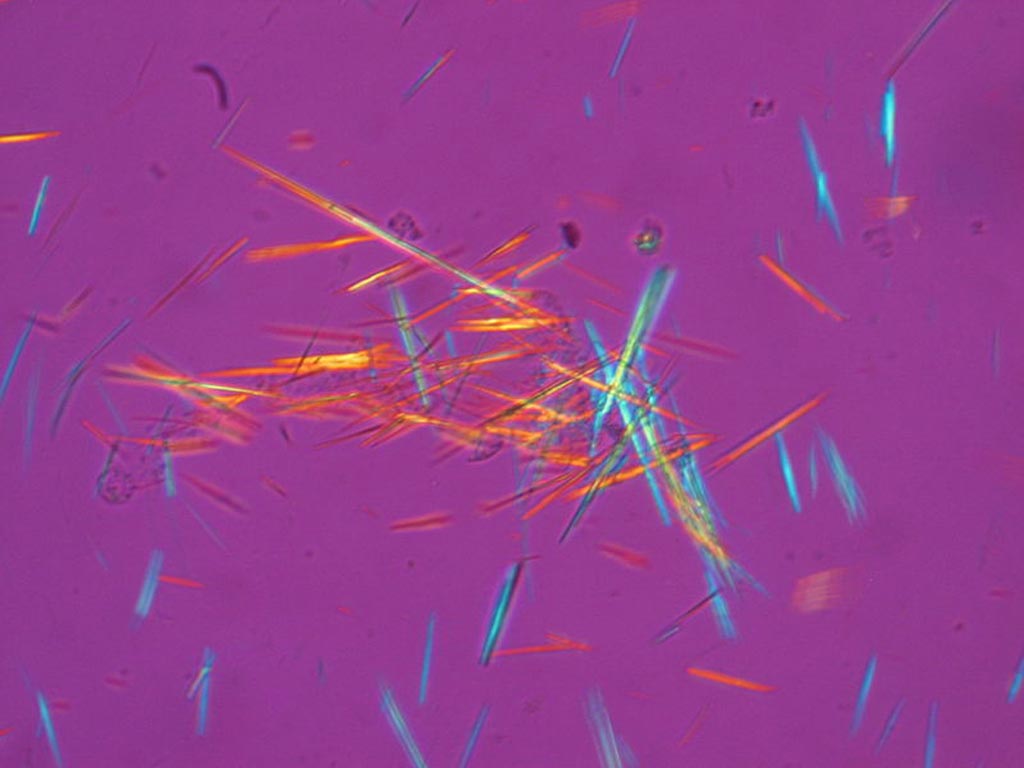 Image: Spiked rods of monosodium urate crystals photographed under polarized light from a synovial fluid sample. Formation of monosodium urate crystals in the joints is associated with gout (Photo courtesy of Wikimedia Commons).
A large GWAS (genome-wide association study) highlighted genetic loci associated with the metabolic regulation of serum levels of uric acid (urate) and identified a panel of 183 loci linked to the risk of developing gout.

Uric acid is a heterocyclic compound of carbon, nitrogen, oxygen, and hydrogen with the formula C5H4N4O3. It forms ions and salts known as urates and acid urates, such as ammonium acid urate. Uric acid is a product of the metabolic breakdown of purine nucleotides, and it is a normal component of urine. High blood concentrations of uric acid can lead to gout and are associated with other medical conditions, including diabetes and the formation of ammonium acid urate kidney stones.

Results of the analysis identified 183 loci where DNA variations were strongly linked to high serum urate levels, of which only 36 had been found in prior studies. The investigators developed a risk scoring system from the panel of 183 loci, which they used to assess the gout risk in an independent sample of 334,880 people from a medical research database. They found that the panel of 183 loci accurately stratified the participants according to their risk of developing gout. The prevalence of gout in the 3.5% of individuals in the three highest risk score categories was more than three times greater than that of those in the most common risk score category.

Further mining of the data enabled the investigators to map the 183 loci to specific genes. Many of these genes normally were active in the kidneys, urinary tract, and liver, which were expected considering the roles of the kidneys and liver in regulating serum urate levels.

“These genetic variants we highlighted can now be studied further to identify how they contribute to high urate levels, and to determine whether they would be good targets for treating gout,” said first author Dr. Adrienne Tin, assistant scientist in epidemiology at Johns Hopkins University. “These findings may be useful in developing screening tests for gout risk so that patients who are at risk can adopt dietary changes to avoid developing the condition. The urate-related gene variants and biological pathways uncovered here also should be useful in the search for new ways to treat gout.”

The study was published in the October 2, 2019, issue of the journal Nature Genetics.