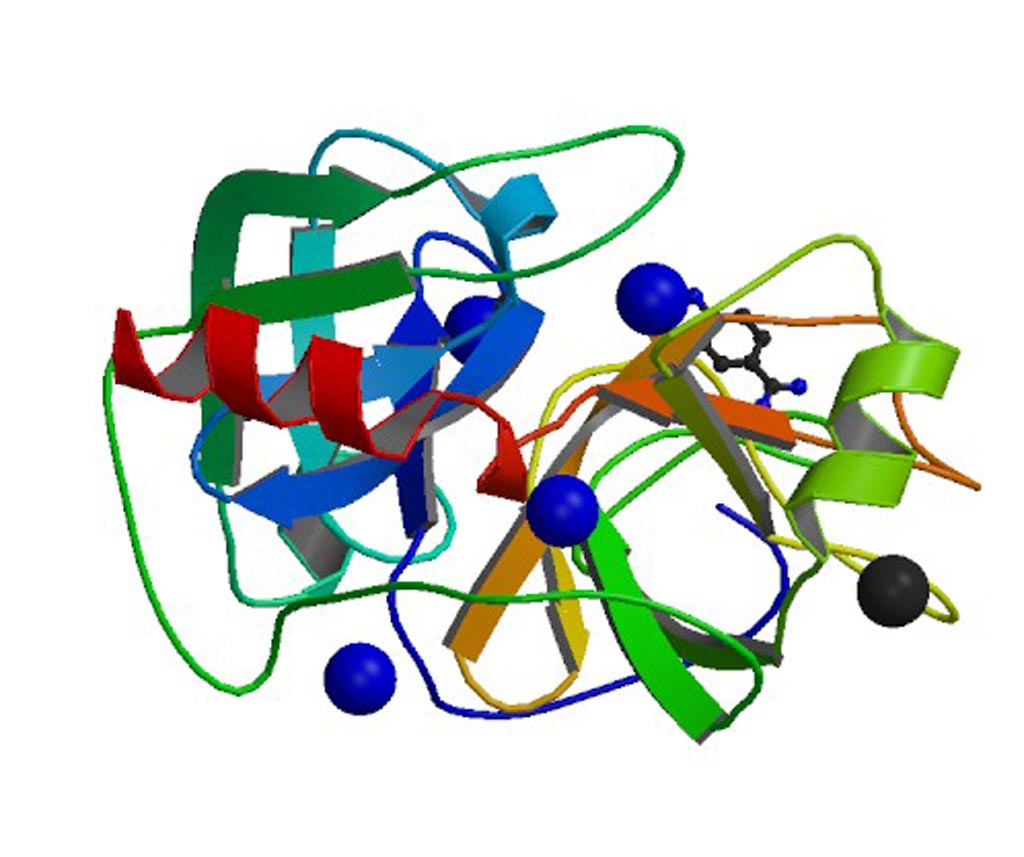 Image: Human Kallikrein 4 (KLK4) protein complexed with nickel and p-aminobenzamidine (Photo courtesy of Wikimedia Commons).
A novel gene fusion product has been proposed as a biomarker for the non-invasive diagnosis of prostate cancer.

Investigators at the Henry Ford Health System (Detroit, MI, USA) recently presented the functional characterization of pseudogene-associated recurrent gene fusion in prostate cancer. The fusion gene KLK4-KLKP1 was formed by the fusion of the protein-coding gene KLK4 (Kallikrein 4) with the noncoding pseudogene KLKP1.

Pseudogenes are segments of DNA that are related to real genes. Pseudogenes have lost at least some functionality, relative to the complete gene, in cellular gene expression or protein-coding ability. Pseudogenes often result from the accumulation of multiple mutations within a gene whose product is not required for the survival of the organism, but can also be caused by genomic copy number variation (CNV). Although not fully operational, pseudogenes may be functional, similar to other kinds of noncoding DNA, which can perform regulatory tasks.

Currently, diagnostic tests for prostate cancer are not sufficiently specific to be able to differentiate individuals without prostate cancer, those with low risk disease that is unlikely to be of clinical significance, and those with disease that should be treated. To rectify this situation, the investigators carried out a study that began with the screening of a cohort of 659 patients (380 Caucasian American; 250 African American, and 29 patients from other races).

Results of the screen revealed that the KLK4-KLKP1 gene fusion product was expressed in about 32% of prostate cancer patients. Furthermore, screening of patient urine samples showed that KLK4-KLKP1 could be detected non-invasively in urine.

Development of an antibody specific to the KLK4-KLKP1 fusion protein confirmed the expression of the full-length KLK4-KLKP1 protein in prostate tissues. In vitro and in vivo functional assays to study the oncogenic properties of KLK4-KLKP1 confirmed its role in cell proliferation, cell invasion, intravasation, and tumor formation.

"The unique feature of this fusion gene is the conversion of the noncoding pseudogene KLKP1 into a protein coding gene, and its unique expression in about 30% of high Gleason grade prostate cancer," said senior author Dr. Nallasivam Palanisamy, associate scientist in cancer research at the Henry Ford Health System. "Like other ETS family gene fusions, KLK4-KLKP1 can also be detected in the urine samples of patients with prostate cancer, enabling non-invasive detection of prostate cancer. Given the unique feature of this fusion, prostate cancer specific expression, oncogenic properties, and noninvasive detection, this novel gene fusion has the potential to be used as a biomarker for early detection of prostate cancer and a therapeutic target."

The gene fusion paper was published in the October 2019 issue of the journal Neoplasia.