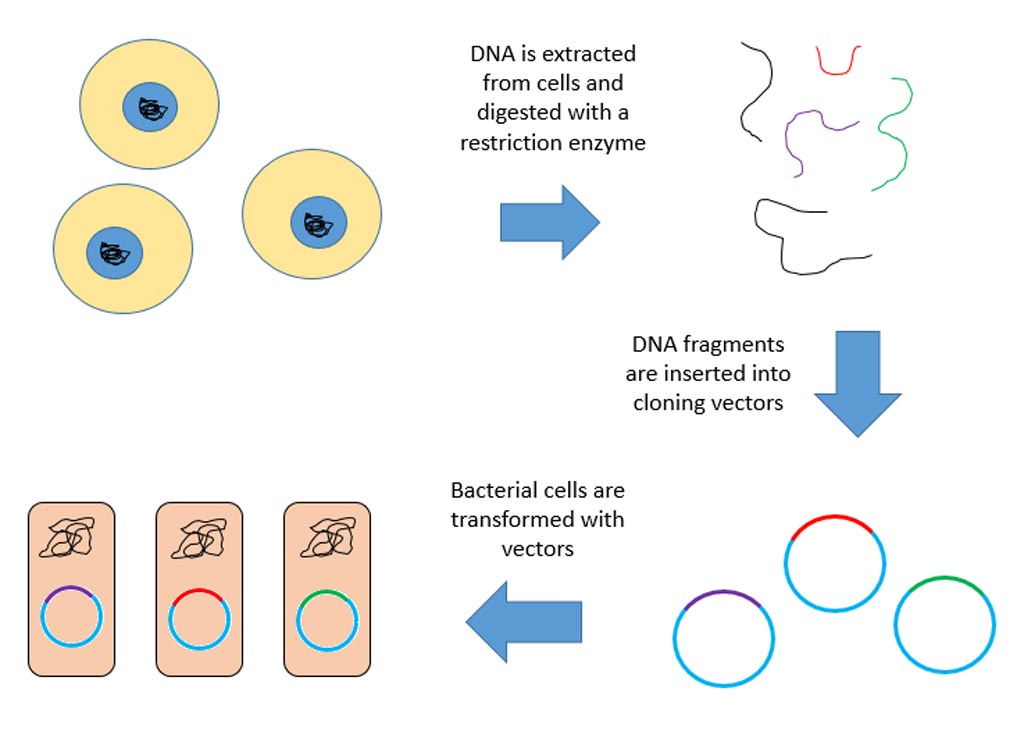 Image: A diagram of construction of a genomic library (Photo courtesy of Wikimedia Commons).
A method has been described that simplifies preparation of tumor genomic DNA libraries by employing restriction enzymes and in vitro transcription to barcode and amplify genomic DNA prior to library construction.

In general, a genomic library is the collection of the total genomic DNA from a single organism. The DNA is stored in a population of identical vectors, each containing a different insert of DNA. In order to construct a genomic library, the organism's DNA is extracted from cells and then digested with a restriction enzyme to cut the DNA into fragments of a specific size. The fragments are then inserted into the vector using DNA ligase.

Copy number alterations or variations are common features of cancer cells. Within the same tumor, cells belonging to different anatomical areas of the tumor may carry different variations. Tumors with many variations are typically very aggressive and tend to be resistant to treatment.

Current strategies for massively parallel sequencing of tumor genomic DNA mainly rely on library indexing in the final steps of library preparation. This procedure is costly and time-consuming, since a library must be generated separately for each sample. Furthermore, whole-genome amplification requires intact DNA and thus is problematic in fixed tissue samples, in particular formalin-fixed, paraffin-embedded (FFPE) specimens, which still represent a cornerstone in pathology.

To overcome these limitations, investigators at the Karolinska Institutet (Solna, Sweden) developed a method, which they named CUTseq, that combined restriction endonucleases with in vitro transcription (IVT) to construct highly multiplexed DNA libraries for reduced representation genome sequencing of multiple samples in parallel.

The investigators showed that CUTseq could be used to barcode gDNA extracted from both non-fixed and fixed samples, including old archival FFPE tissue sections. They benchmarked CUTseq by comparing it with a widely used method of DNA library preparation and demonstrated that CUTseq could be used for reduced representation genome and exome sequencing, enabling reproducible DNA copy number profiling and single-nucleotide variant (SNV) calling in both cell and low-input FFPE tissue samples.

The investigators demonstrated an application of CUTseq for assessing genetic differences within tumors by profiling DNA copy number levels in multiple small regions of individual FFPE tumor sections. Finally, they described a workflow for rapid and cost-effective preparation of highly multiplexed CUTseq libraries, which could be applied in the context of high-throughput genetic screens and for cell line authentication.

"I expect that CUTseq will find many useful applications in cancer diagnostics," said senior author Dr. Nicola Crosetto, senior researcher in medical biochemistry and biophysics at the Karolinska Institutet. "Multi-region tumor sequencing is going to be increasingly used in the diagnostic setting, in order to identify patients with highly heterogeneous tumors that need to be treated more aggressively. I believe that our method can play a leading role here."

The study was published in the October 18, 2019, online edition of the journal Nature Communications.