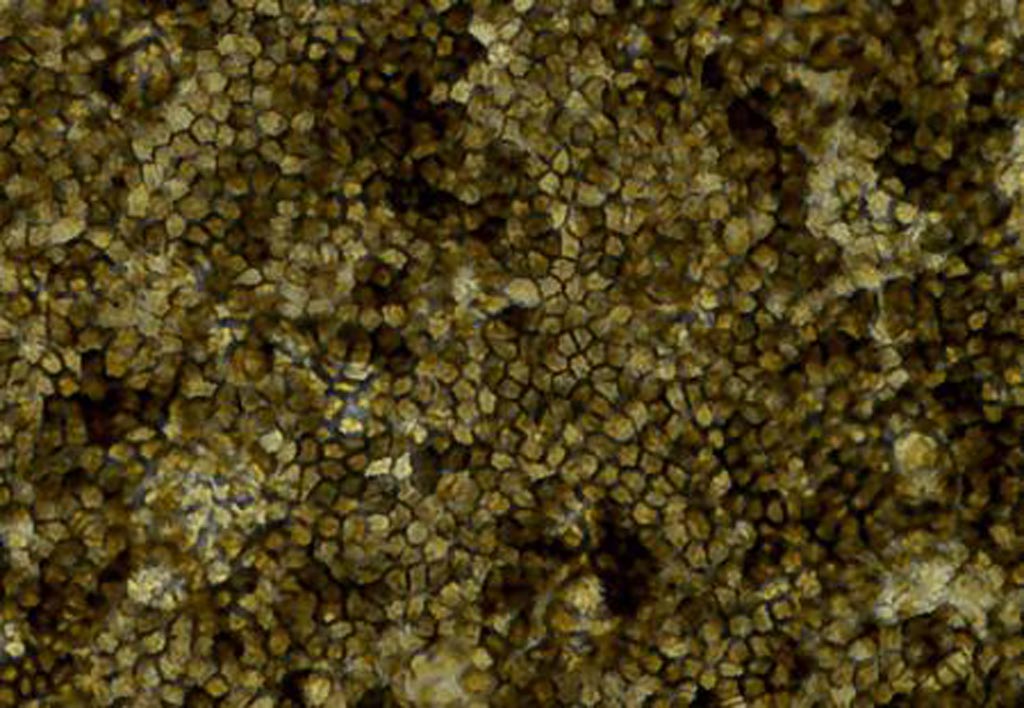 Image: A micrograph showing retinal cells derived from a patient\'s skin cells, via induced pluripotent stem cells. The cells are organized in a polygonal shape and have taken on characteristic pigmentation (Photo courtesy of the University of California, San Diego).
Eye disease researchers used advanced stem cell technology to create a laboratory model of age-related macular degeneration (AMD), which enabled in-depth analysis of the genetics underlying the syndrome.

AMD, one of the most common causes of vision loss in the elderly, causes the slow degradation of the cells comprising the macula of the retina, which is the region in the back of the eye that transmits information to the brain. The exact cause of the disease is unknown, but studies have suggested that genetics plays an important role.

To define the role of genetic risk in AMD, investigators at the University of California, San Diego (USA) created an in vitro model based on human induced pluripotent stem cell-derived retinal pigment epithelium (iPSC-RPE) cells from six subjects. To do this, they generated iPSCs from skin cells, and then used a cocktail of molecules and growth factors to transform the iPSCs into retinal cells. The induced RPEs were found to have morphological and molecular characteristics similar to those of native RPE.

The model system was used to generate molecular data, including RNA transcripts and epigenetic information. These findings were combined with complementary published data from 18 adults with and without AMD.

Results revealed that the genetic variant most closely associated with AMD was rs943080, a specific genetic variation that affected expression of the VEGFA (vascular endothelial growth factor A) gene, possibly through regulation by a non-coding region of the genome. Five of the six participants had one copy of rs943080 and one person had two copies of the gene variant. VEGFA protein is known for supporting new blood vessel growth, a process that characterizes AMD.

"We did not start with the VEGFA gene when we went looking for genetic causes of AMD," said senior author Dr. Kelly A. Frazer, professor of pediatrics at the University of California, San Diego. "But we were surprised to find that, with samples from just six people, this genetic variation clearly emerged as a causal factor."

The authors concluded that their results had established a molecular hypothesis for the VEGFA genetic risk locus in AMD and illustrated the potential of iPSC-RPE as a model system to study the molecular function of genetic variation associated with AMD.

The AMD stem cell study was published in the May 9, 2019, online edition of the journal Stem Cell Reports.