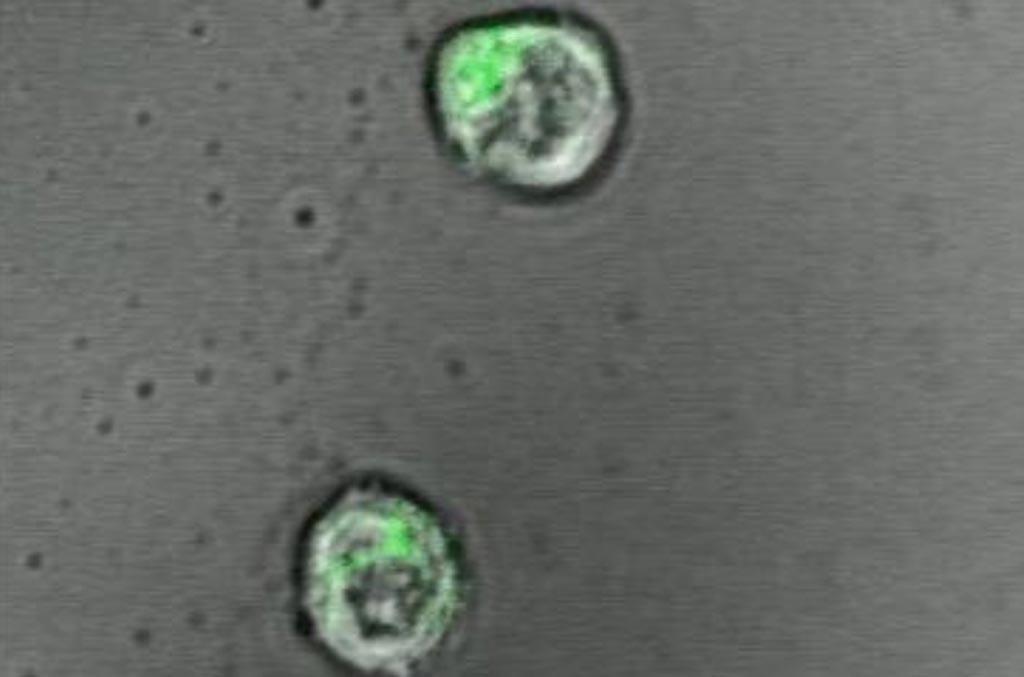 Image: T-cells interacting with the transparent gel (Photo courtesy of Hawley Pruitt, Johns Hopkins University).
A novel hydrogel-based culture system was used to generate activated immune T-cells that were shown to be able to block growth of melanoma tumors in a mouse model.

Current T-cell therapies require the removal and culture of the cells in order to expand their number by several thousand‐fold. However, these cells often lose the phenotype and cytotoxic functionality for mediating effective therapeutic responses. While the extracellular matrix (ECM) has been used to preserve and augment cell phenotype, it has not been applied to cellular immunotherapies.

Investigators at Johns Hopkins University (Baltimore, MD, USA) extended research into the potential use of ECM by producing a hyaluronic acid (HA)‐based hydrogel that was engineered to present the two stimulatory signals required for T‐cell activation. They called this gel an "artificial T‐cell stimulating matrix (aTM)". The investigators created and tested a range of hydrogels with different tactile properties, from very soft - like a single cell - to hard gels resembling the state within a cell-packed lymph node.

Results published in the April 10, 2019, online edition of the journal Advanced Materials revealed that the combination of the ECM environment and mechanically sensitive T-cell receptor signaling from the aTM resulted in a rapid and robust expansion of rare, antigen‐specific CD8+ T-cells. T-cells cultivated onto a soft hydrogel multiplied from just a few cells to about 150,000 cells within seven days. By contrast, conventional methods to stimulate and expand T-cells were able to generate only about 20,000 cells within the same time period. In addition, more than 80% of T-cells implanted onto the soft surface multiplied themselves, compared with none of the T-cells implanted on the firmest type of hydrogel.

"One of the surprising findings was that T-cells prefer a very soft environment, similar to interactions with individual cells, as opposed to a densely packed tissue," said senior author Dr. Jonathan Schneck, professor of pathology, medicine, and oncology at Johns Hopkins University. "As we perfect the hydrogel and replicate the essential feature of the natural environment, including chemical growth factors that attract cancer-fighting T-cells and other signals, we will ultimately be able to design artificial lymph nodes for regenerative immunology-based therapy."