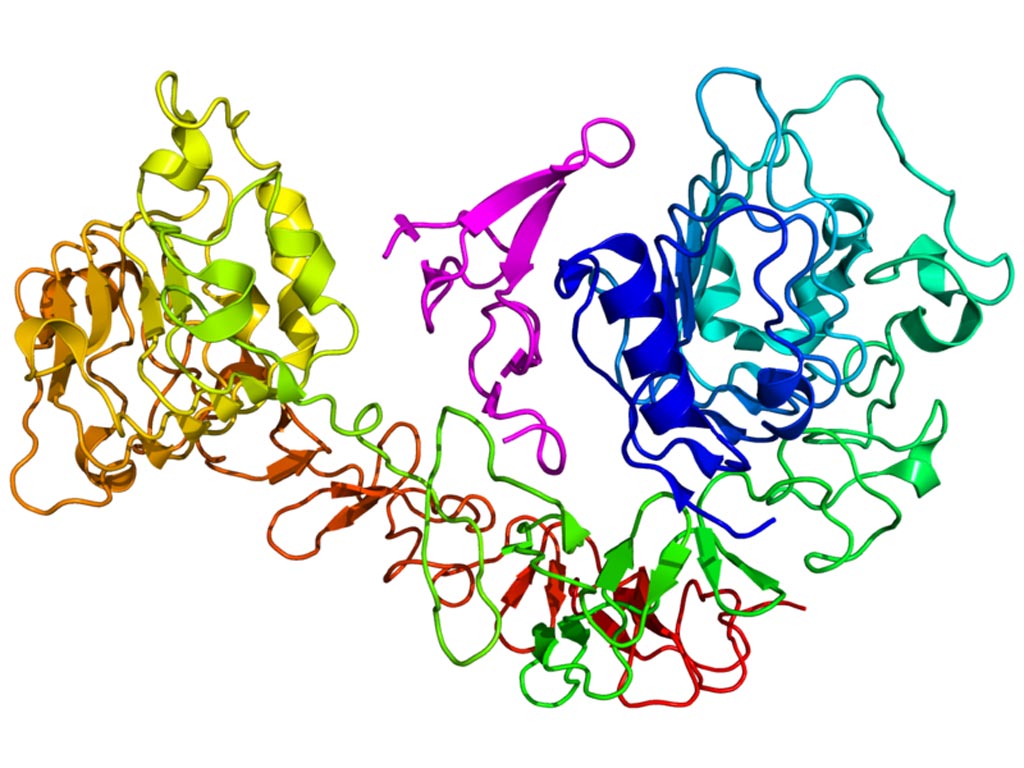 Image: A diagram of the epidermal growth factor receptor (EGFR) (rainbow colored, N-terminus = blue, C-terminus = red) complexed its ligand epidermal growth factor (magenta) (Photo courtesy of Wikimedia Commons).
Cancer researchers have suggested that by exploiting the link between a specific microRNA and the tricarboxylic acid energy-producing cycle it may be possible to prevent or reverse the development of drug tolerance or resistance by non-small-cell lung carcinomas.

MicroRNAs (miRNAs) and short interfering RNAs (siRNA) comprise a class of about 20 nucleotides-long RNA fragments that block gene expression by attaching to molecules of messenger RNA in a fashion that prevents them from transmitting the protein synthesizing instructions they had received from the DNA. MiRNAs resemble siRNAs of the RNA interference (RNAi) pathway, except miRNAs derive from regions of RNA transcripts that fold back on themselves to form short hairpins, whereas siRNAs derive from longer regions of double-stranded RNA. With their capacity to fine-tune protein expression via sequence-specific interactions, miRNAs help regulate cell maintenance and differentiation.

Non-small cell lung cancers, which comprise about 85% of lung cancer diagnoses, tend to be less aggressive but harder to treat than small cell lung cancers. About 10% of non-small-cell lung carcinomas carry an epidermal growth factor receptor (EGFR) mutation. Drug tolerance developed by cancer cells is an acute defense response preceding a fully drug-resistant state and tumor relapse; however, there are few therapeutic agents targeting drug tolerance in the clinic.

The investigators reported in the April 8, 2019, online edition of the journal Nature Metabolism that using miRNA-seq analysis, they determined that miR-147b was the most upregulated microRNA in osimertinib-tolerant and EGFR-mutated lung cancer cells. Whole-transcriptome analysis of single-cell-derived clones revealed a link between osimertinib tolerance and pseudohypoxia responses irrespective of oxygen levels.

"These results were a surprise and represent a total novel finding in the area," said senior author Dr. Frank J. Slack, professor of medical research at Beth Israel Deaconess Medical Center. "In this study, we discovered that a microRNA known as miR-147b is a critical mediator of resistance among a subpopulation of tumor cells that adopt a tolerance strategy to defend against EGFR-based anticancer treatments. We are currently testing the idea of targeting this new pathway as a therapy in clinically relevant mouse models of EGFR-mutant lung cancer."