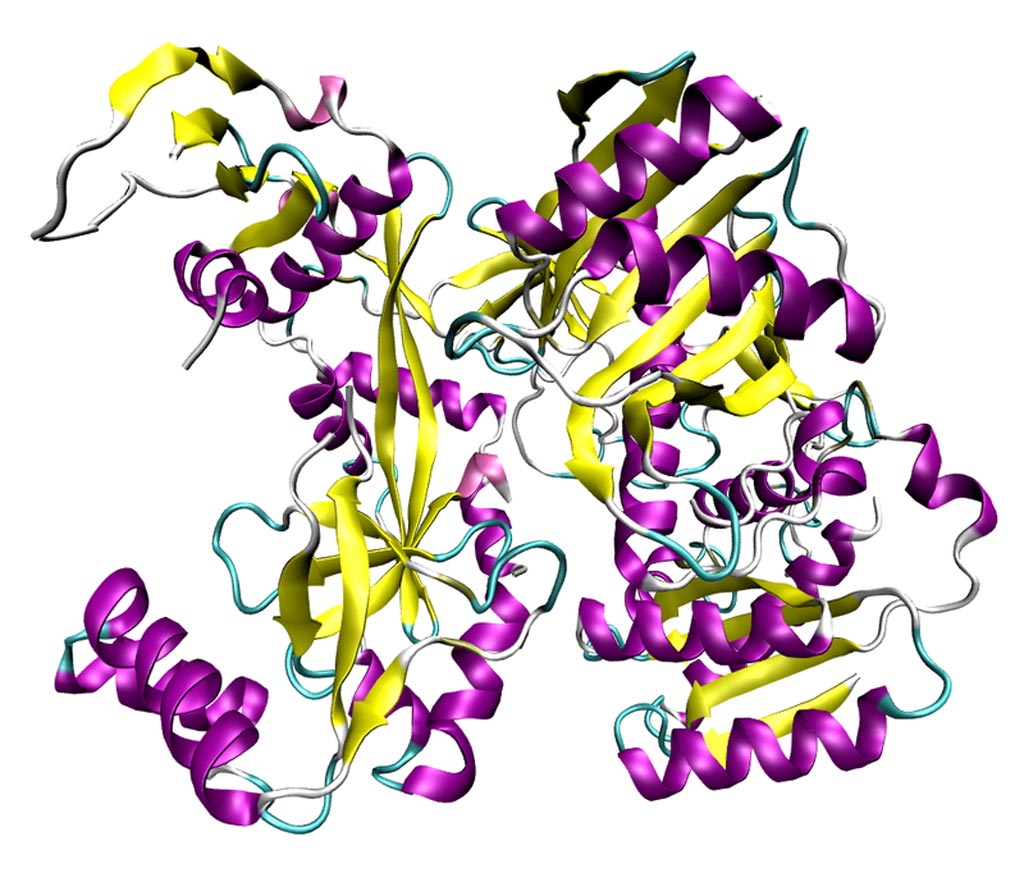 Image: An argonaute protein from Pyrococcus furiosus; these proteins are the catalytic endonucleases in the RNA-induced silencing complex, the protein complex that mediates the RNA interference phenomenon (Photo courtesy of Wikimedia Commons).
Researchers working with a mouse model have determined that the Argonaute 2 (Ago2) protein mediates RNA silencing, which regulates both intrinsic energy production and consumption and disturbs energy metabolism in the development of obesity.

Argonaute proteins are the catalytic components of the RNA-induced silencing complex (RISC), the protein complex responsible for RNA interference (RNAi) gene silencing. Argonaute proteins bind different classes of small non-coding RNAs, including microRNAs (miRNAs), small interfering RNAs (siRNAs), and Piwi-interacting RNAs (piRNAs). Small RNAs guide Argonaute proteins to their specific targets through sequence complementarity, which typically leads to silencing of the target. Some of the Argonaute proteins have endonuclease activity directed against messenger RNA (mRNA) strands that display extensive complementarity to their bound small RNA, and this is known as Slicer activity. These proteins are also partially responsible for selection of the guide strand and destruction of the passenger strand of the siRNA substrate.

RNA silencing inhibits mRNA translation. While mRNA translation accounts for the majority of cellular energy expenditure, it is unclear if RNA silencing regulates energy homeostasis. To clarify this issue, investigators at Cincinnati Children's Hospital Medical Center (OH, USA) genetically engineered a line of mice that lacked Argo2 in their livers.

The investigators reported in the September 10, 2018, online edition of the journal Nature Communications that Ago2 regulated expression of specific miRNAs including miR-802, miR-103/107, and miR-148a/152, causing metabolic disruption, while simultaneously suppressing the expression of genes regulating glucose and lipid metabolism.

This study demonstrated that hepatic Ago2-mediated RNA silencing regulated energy expenditure during the course of obesity, and its inactivation protected mice from obesity-associated glucose intolerance and hepatic steatosis.

“Although this is still basic science, we propose that there may be important translational implications for our findings for chronic metabolic disorders like diabetes, fatty liver diseases, and other obesity associated illnesses,” said senior author Dr. Takahisa Nakamura, senior investigator in endocrinology at Cincinnati Children's Hospital Medical Center. “This allows us to explore the potential of finding a novel therapeutic approach that alters energy balance in obesity and modulates the associated diseases.”