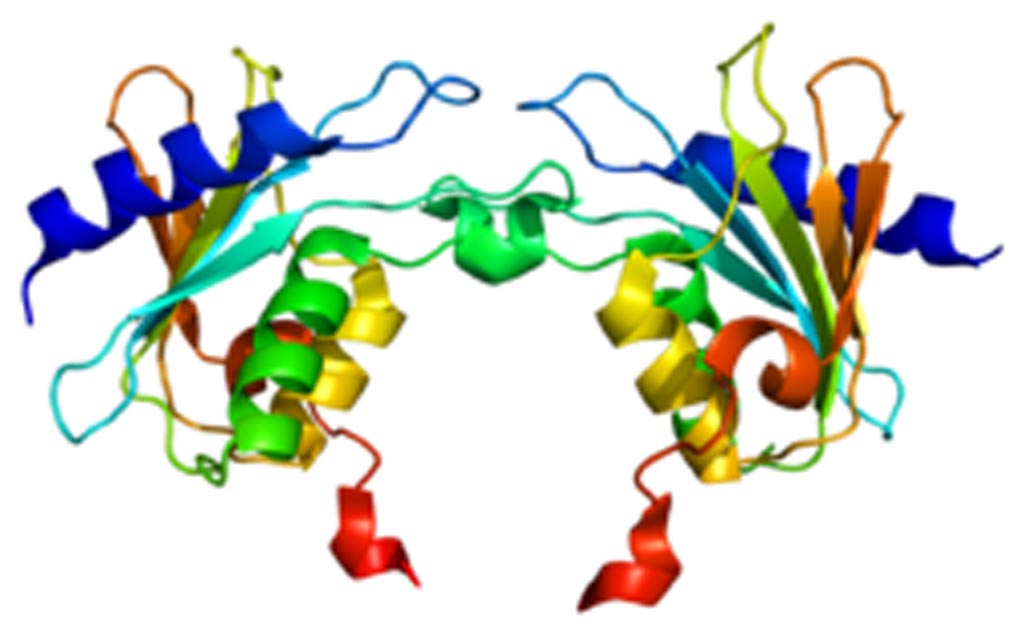 Image: A model of the cytidine deaminase enzyme, which is a component of the single-base gene-editing system (Photo courtesy of Wikimedia Commons).
A variation of the CRISPR/Cas9 genome-editing tool enables more precise manipulation of target genes by not breaking double stranded DNA and instead modifying a single point in the targeted DNA sequence.

CRISPR gene editing has revolutionized biomedicine and biotechnology by providing a simple means to engineer genes through targeted double-strand breaks in the genomic DNA of living cells. However, given the random nature of cellular DNA repair mechanisms and the potential for off-target mutations, technologies capable of introducing targeted changes with increased precision, such as single-base editors, are preferred.

In this regard, a single-base editing system called CRISPR-SKIP was described by investigators at the University of Illinois (Champaign, USA) in the August 15, 2018, online edition of the journal Genome Biology. This method utilized cytidine deaminase single-base editors to program exon skipping by mutating target DNA bases within splice acceptor sites. Thus, CRISPR-SKIP altered a single base before the beginning of an exon, causing the cell to read it as a non-coding portion.

The modified exon was not included in mature RNA, which prevented the corresponding amino acids from becoming part of the protein product. Proteins that are missing a few amino acids often retain partial or full activity, which may be enough to restore function in some genetic diseases.

"Given the problems with traditional gene editing by breaking the DNA, we have to find ways of optimizing tools to accomplish gene modification. This is a good one because we can regulate a gene without breaking genomic DNA," said senior author Dr. Pablo Perez-Pinera, professor of bioengineering at the University of Illinois.

"In Duchenne's muscular dystrophy, for example, just correcting 5% to 10% of the cells is enough to achieve a therapeutic benefit. With CRISPR-SKIP, we have seen modification rates of more than 20% to 30% in many of the cell lines we have studied," said Dr. Perez-Pinera.