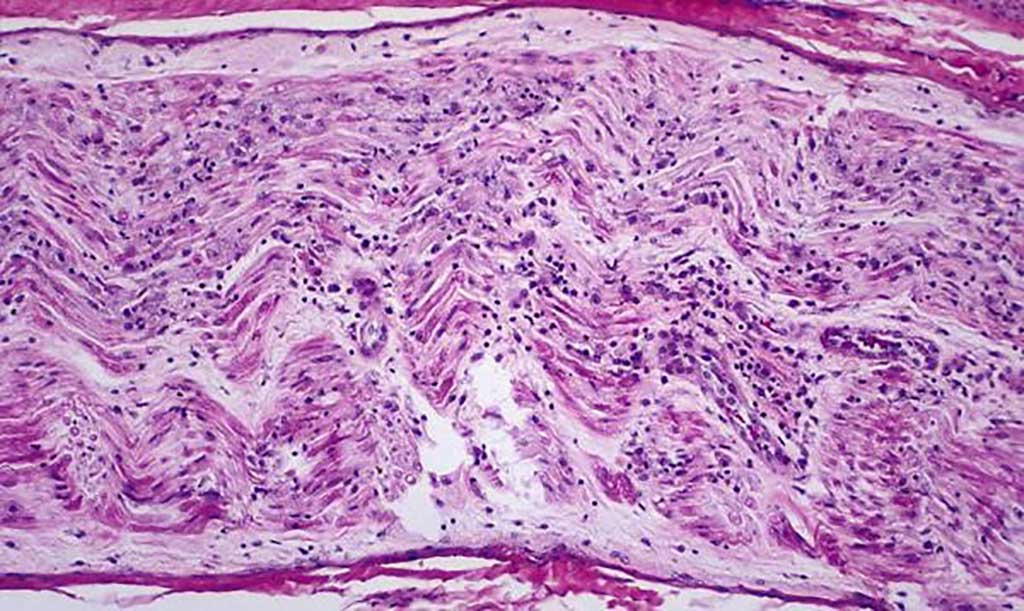 Image: Histopathology of Guillain-Barré syndrome: Inflammation in peripheral nerve (Photo courtesy of Dimitri P. Agamanolis, MD).
Guillain-Barré syndrome (GBS) is a rare, autoimmune disorder in which a person’s own immune system damages the nerves, causing muscle weakness and sometimes paralysis. GBS can cause symptoms that last for a few weeks to several years. Most people recover fully, but some have permanent nerve damage.

The diagnosis of GBS depends on findings such as rapid development of muscle paralysis, absent reflexes, absence of fever, and absence of a likely cause. Cerebrospinal fluid analysis (through a lumbar spinal puncture) and nerve conduction studies are supportive investigations commonly performed in the diagnosis of GBS. Testing for antiganglioside antibodies is often performed, but their contribution to diagnosis is usually limited.

GBS patients were an average age of 57, and 57.1% were men. Most (68.4%) presented with GBS symptoms after an infectious event; median time from symptom onset to inclusion in the study was four days. Two-thirds of patients presented with the typical sensorimotor variant of GBS. Most patients were treated with intravenous immunoglobulin (77.6%) or intravenous immunoglobulin plus plasma exchange (10.2%).

Luis Querol, MD, PhD, a Neurologist and co-author of the study, said, “These findings are important on several levels. First, they confirm that residual long-term disability in GBS is clearly associated to the degree of axonal damage that happens at the onset of the disease. They also suggest that sNfL could be used to stratify patients at admission, and in the future, select patients who may be candidates for more aggressive therapies or those who may have good prognosis independently of the apparent severity they have at onset.”

The authors concluded that baseline sNfL levels are increased in patients with GBS, are associated with disease severity and axonal variants and have an independent prognostic value in patients with GBS. The study was published on November 5, 2020 in the Journal of Neurology, Neurosurgery, and Psychiatry.