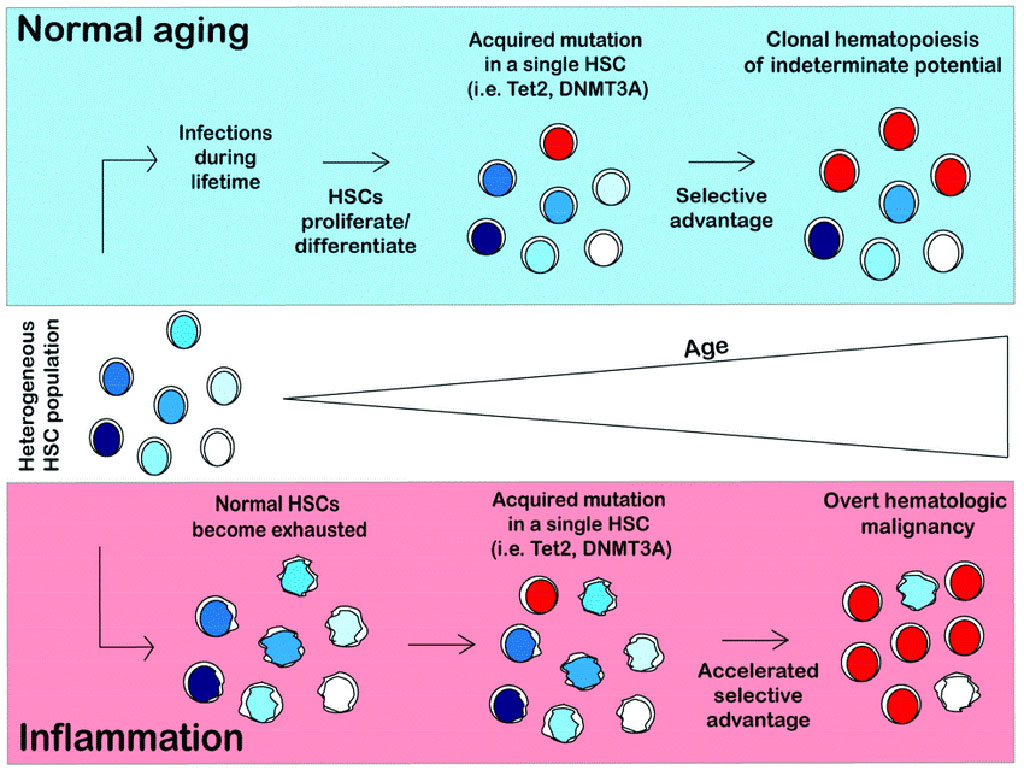 Image: Model of clonal hematopoiesis in normal and inflammatory conditions. In a normal person, hematopoietic stem cells (HSCs) will differentiate and self-renew over the course of a lifetime to replenish the blood system. HSCs will acquire somatic mutations as a result of proliferative stress (Photo courtesy of University of California Irvine).
Clonal hematopoiesis of indeterminate potential (CHIP) is characterized by detectable hematopoietic-associated gene mutations in a person without evidence of hematologic malignancy. Somatic mutations at hotspots (genetic loci observed to be frequently mutated across cancer patients) often drive or contribute to cancer pathogenesis.

The mutations in hematopoiesis-regulating genes used to identify CHIP include hotspot mutations of high recurrence, but also include mutations lacking driver or recurrent evidence at specific amino acid positions. Regardless of neoplastic evidence, CHIP mutations are frequently identified in persons singly, therefore, most are likely responsible for the clonal expansion that makes their detection possible.

Pediatricians and their colleagues at Huntsman Cancer Institute (Salt Lake City, UT, USA) sought to identify additional cancer-presenting mutations useable for CHIP detection by performing a data mining analysis of 48 somatic mutation studies reporting mutations at diagnoses of 7,430 adult and pediatric patients with hematologic malignancies. They sought to identify mutation hotspots, or frequent changes in specific locations of the cancer patients' genetic information. The team used these hotspots to look for whether the same mutations were present in the DNA data of more than 4,500 people who were not known to have a cancer diagnosis.

The scientists examined published data from 48 cancer studies that reported mutations present in persons who were being diagnosed with leukemia or other hematologic malignancies. Across the pediatric and adult cancer patients of those studies, 434 DNA locations were identified as frequently mutated. Then, in a subsequent analysis of many terabytes of publicly available genetic data, they identified these same cancer-relevant mutations at low levels among 83 of the 4,538 (1.8%) persons who were presumably free from cancer.

Finding a low-level mutation identical to one that is frequently present at cancer diagnoses could be alarming to a currently healthy person screened for such events. But fortunately, because cancer frequently requires multiple mutations to be present in a sizeable fraction of cells, most persons with a single low-level mutation are not likely to develop cancer for many years or decades, if they develop cancer at all.

Clint C. Mason, PhD, an Assistant Professor of Pediatrics who led the study, said, “Understanding how a disease develops is greatly benefited by studying persons who are currently healthy, but are on a trajectory for disease onset.”

The authors concluded that their hematologic cancer-focused hotspot list will allow for subgroup analyses of CHIP in future studies, with promise to improve its prognostic performance and future blood cancer prevention research efforts. The study was published on March 3, 2021 in the journal Blood Cancer Discovery.