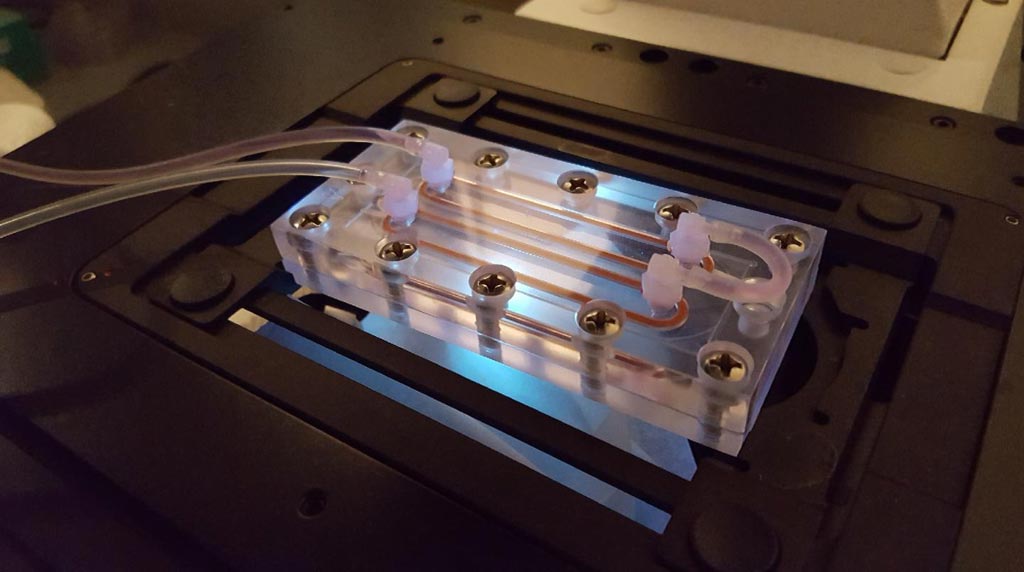 Image: A version of the CapioCyte technology used in the study, which directs the flow of a small amount of patient\'s blood through a chamber lined with tumor cell-capturing proteins (Photo courtesy of Michael Poellman, University of Wisconsin).
Innovations in the methodology used to collect circulating tumor cells (CTCs) from blood specimens will allow reliable monitoring of CTC changes during and after treatment.

The detection of CTCs may have important prognostic and therapeutic implications, but because their numbers can be very small, these cells are not easily detected. It has been estimated that among the cells that have detached from a primary tumor, only 0.01% can form metastases. Circulating tumor cells are found in frequencies on the order of one to 10 CTCs per milliliter of whole blood in patients with metastatic disease. For comparison, one milliliter of blood contains a few million white blood cells and a billion red blood cells. This low frequency, associated to difficulty of identifying cancerous cells, means that a key component of understanding CTCs biological properties require technologies and approaches capable of isolating one CTC per milliliter of blood, either by enrichment, or with enrichment-free assays that identify all CTC subtypes in sufficiently high definition to satisfy diagnostic pathology image-quantity requirements in patients with a variety of cancer types.

Towards this end, investigators at the University of Wisconsin (Madison, USA) examined the effects of multivalent binding and biomimetic cell rolling on the sensitivity and specificity of CTC capture. They also investigated the clinical significance of CTCs and their kinetic profiles in cancer patients undergoing radiotherapy (RT) treatment.

For the study peripheral blood was collected prospectively at up to five time points from 24 patients with head-and-neck, prostate, rectal, or cervical cancer who were undergoing radiation therapy (RT), with or without chemotherapy.

The CapioCyte platform utilizes proprietary chips that are inserted into a specially designed flow chamber. Samples are then passed through this flow chamber at a precisely controlled rate. The surface of the chip is specially treated to induce biomimetic cell rolling to enable cell capture utilizing antibodies bound to dendrimers. Cell rolling mimics the physiological interaction of CTCs and blood vessel walls, slowing movement and recruiting and enriching cells within the flow chamber. Once captured, CTCs can either be recovered for post capture analysis such as RNA-Seq, or they can be automatically stained for subsequent fluorescence image capture.

Results published in the March 15, 2018, online edition of the journal Clinical Cancer Research revealed that the CapioCyte system was able to detect CTCs in all 24 cancer patients. Multivalent binding via poly(amidoamine) dendrimers further improved capture sensitivity. The cell rolling effect improved CTC capture specificity by up to 38%. CTCs declined throughout RT in patients with complete clinical and/or radiographic response, in contrast to an elevation in CTCs at mid or post-RT in the two patients with known pathologic residual disease.

"The absolute numbers of CTCs do not represent too much because there is too much variation individually, but the more important thing we found was the trend - how the CTC numbers change over time upon treatment. So, for example, we have shown that the CTCs go down when the patients are responding really well to the radiotherapy," said senior author Dr. Seungpyo Hong, professor of pharmacy at the University of Wisconsin. "What makes us excited in particular is we can see the direct impact. As a researcher, if you develop a new technology and it can directly help people, that is going to be the most rewarding experience – it is really exciting."