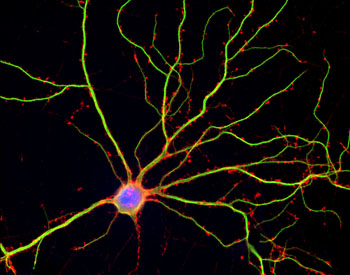 Image: A photomicrograph of a human neuron in culture (Photo courtesy of Shelley Halpain, University of California, San Diego).
Neurological disease researchers have developed a method for using a biomarker in the blood to predict the likelihood of mild cognitive impairment (MCI) progressing into full-blown Alzheimer's disease (AD).

"MCI is often a transitional stage between normal aging and dementia," said senior author Dr. Robert A. Rissman, associate professor of neurosciences at the University of California, San Diego (USA). "It is associated with more minor cognitive impairment and carries an increased risk of developing Alzheimer's dementia."

The method depends on quantifying levels of AD-related proteins in plasma neuronal derived exosomes (NDEs). Exosomes are cell-derived vesicles that are present in many and perhaps all biological fluids, including blood, urine, and cultured medium of cell cultures. The reported diameter of exosomes is between 30 and 100 nanometers, which is larger than low-density lipoproteins but much smaller than red blood cells. Exosomes, which contain RNA, proteins, lipids and metabolites that are reflective of the cell type of origin, are either released from the cell when multivesicular bodies fuse with the plasma membrane, or they are released directly from the plasma membrane. Exosomes have specialized functions and play a key role in coagulation, intercellular signaling, and waste management. Consequently, there is a growing interest in the clinical applications of exosomes for prognosis, therapy, and as biomarkers for health and disease.

For the current study, plasma exosomes were extracted, precipitated, and enriched for neuronal source by precipitation with antibodies specific for the neuronal cell adhesion molecule L1CAM. NDEs were characterized by size and shape, and extracted NDE protein biomarkers were quantified by ELISAs. In some experiments, the content of plasma NDEs was injected into normal mice, and results were characterized by immunohistochemistry to determine pathogenic potential.

Results published in the May 7, 2016, online edition of the journal Alzheimer's & Dementia revealed that plasma NDE levels of the proteins P-T181-tau, P-S396-tau, and Abeta1–42 were significantly higher, whereas those of neurogranin (NRGN) and the repressor element 1-silencing transcription factor (REST) were significantly lower in AD and MCI converting to AD (ADC) patients compared to cognitively normal controls (CNC) subjects and stable MCI patients.

"The fact that these NDEs could induce pathological-like structures in naïve mice suggests that the contents of NDEs are bioactive," said Dr. Rissman. "It also suggests that released NDEs can be taken up by cells, raising the possibility of NDEs potential for drug delivery."