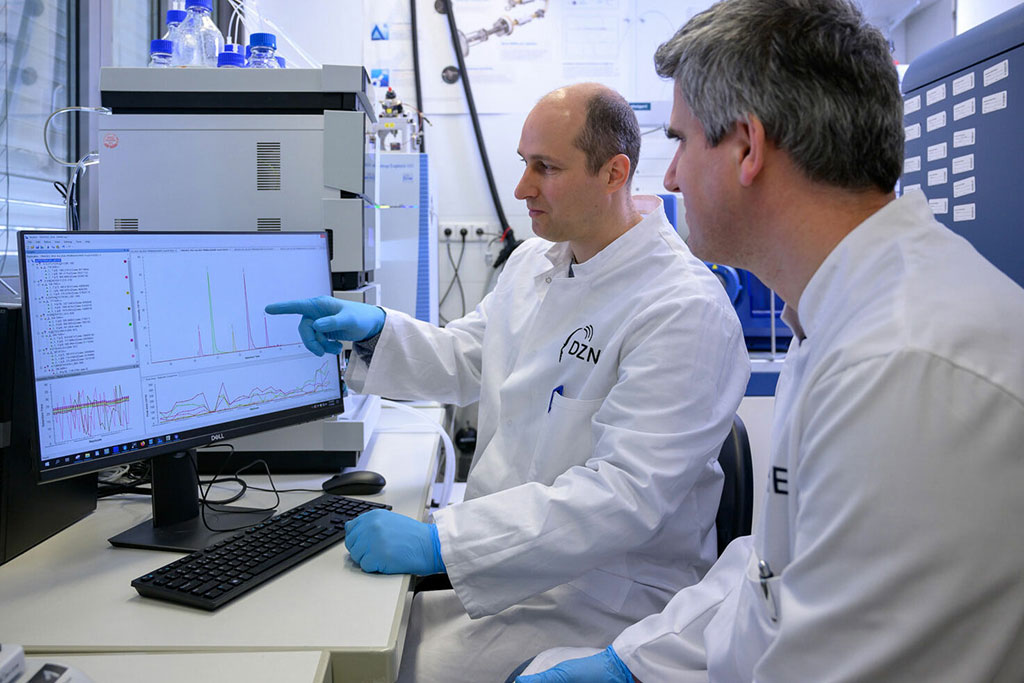 Image: Researchers have discovered in the blood a potential biomarker for nerve damage (Photo courtesy of DZNE)

Researchers have identified a protein in the blood that may indicate the degradation of neural connections years before the onset of dementia symptoms. If these findings are confirmed, recording this protein called “beta-synuclein” could contribute to the early detection of Alzheimer’s disease and possibly also help to assess nerve damage resulting from stroke or traumatic brain injury.

The evidence is based on studies of 84 adults, including 61 people with Down syndrome (also known as “trisomy 21”), conducted by researchers from the German Center for Neurodegenerative Diseases (DZNE, Göttingen, Germany) and Ulm University Hospital (Ulm, Germany).

“Our data suggest that levels of beta-synuclein in the blood rise already in the early stages of Alzheimer’s disease and that this is related to the breakdown of neural connections, so-called synapses,” explained Dr. Patrick Öckl, research group leader at DZNE’s Ulm site and at the Department of Neurology at Ulm University Hospital. “So here we have a potential biomarker that could help detect incipient dementia at an early phase – presumably more than 10 years before symptoms become manifest.” At present, Alzheimer’s disease is diagnosed and treated far too late, the scientist noted: “By then, the brain is already massively damaged. We need to start earlier to increase the chances of being able to effectively combat the disease. Beta-synuclein could open up a possibility for this. However, further studies are still needed to confirm our findings.”

“People with Down syndrome are affected by a genetically determined developmental disorder of the brain, which usually results in an impairment of intellectual abilities. In addition, their genome exacerbates molecular processes that are involved in the development of Alzheimer’s. Down syndrome is therefore associated with an inherited form of Alzheimer’s disease with an early onset of symptoms. Usually, this happens beyond the age of 40,” said Prof. Johannes Levin, neurologist at DZNE’s Munich site and head of the outpatient clinic at LMU Klinikum München for individuals with Down syndrome and cognitive disorders. “From the study of Down syndrome, we can learn quite a bit about dementia. We assume that the processes that occur here in a particularly pronounced way also happen in individuals who have Alzheimer’s but no Down syndrome.”

If further studies confirm the current findings, various applications could be considered for the beta-synuclein marker: “For drug studies on Alzheimer’s disease, a synaptic blood marker would be very helpful to record treatment effects, that is, to determine what an experimental compound does in the brain. This would usefully complement the picture provided by the already established markers,” said Prof. Markus Otto, head of the Department of Neurology at University Medicine Halle, who also played a significant role in the current studies. “I see another application in dementia prevention and early detection. The possibility to measure beta-synuclein in blood is much more convenient for patients compared with the currently used analysis of cerebrospinal fluid.”

“Considering that synapses are also lost in traumatic brain injury and stroke, the relevance of beta-synuclein is even more far-reaching. In these cases, too, the marker could help assess nerve damage and thus contribute significantly to better diagnostics and therapy,” added Otto.