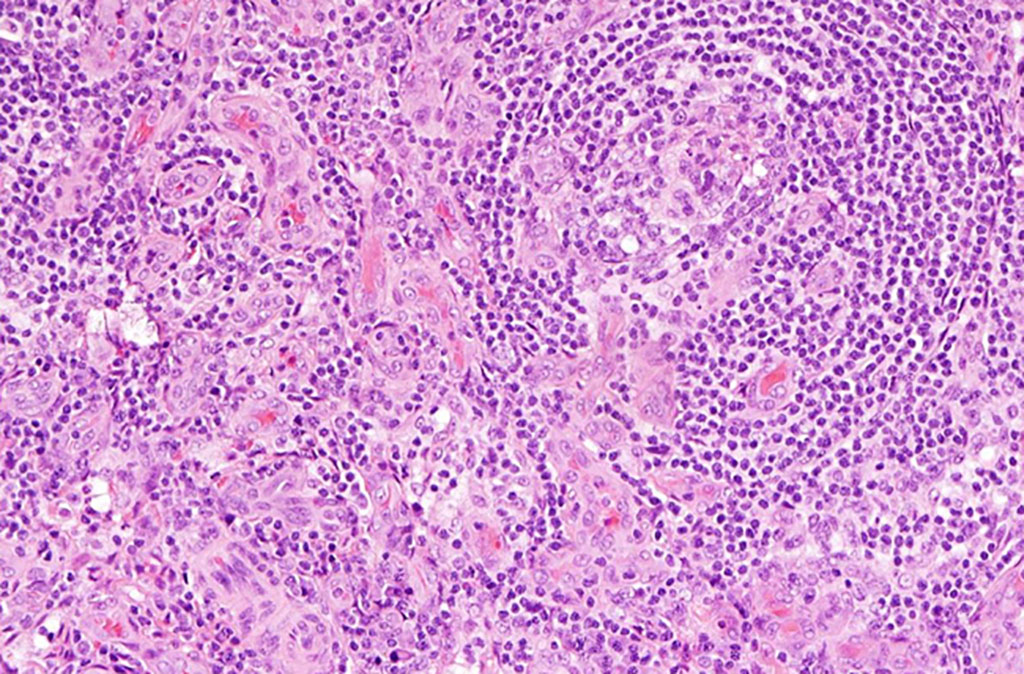 Image: Histopathology of lymph node tissue from a person with idiopathic multicentric Castleman disease. Increased number of blood vessels and smaller germinal centers where immune cells mature in the lymph node, which are two of the pathology features needed to make the diagnosis (Photo courtesy of David Fajgenbaum, MD)

KSHV/HHV8-negative MCD without association with the POEMS (polyneuropathy, organomegaly, endocrinopathy, M proteins, and skin changes) syndrome are termed “idiopathic,” i.e., diseases with no identifiable cause, and are thus referred to as “iMCD”. At present, specific clinical manifestations or diagnostic criteria have not been identified for iMCD, which often results in treatment delay.

Molecular Hematopathologists at the Okayama University Hospital (Okayama, Japan) and their colleagues analyzed lymph node specimens derived from 42 Japanese patients with lymph node involvement of iMCD not otherwise specified (iMCD-NOS), who met the consensus diagnostic criteria of iMCD and were negative for KSHV/HHV8 infections. Upon further examination, the team classified 34 of the 42 patients as the idiopathic plasmacytic lymphadenopathy (IPL) group and the remaining eight as the non-IPL group.

All lymph node specimens were fixed in 10% formalin and embedded in paraffin. Paraffin-embedded tissue blocks were sliced into 3 µm thin sections and stained with hematoxylin and eosin (H&E), immunohistochemical staining and Berlin blue staining. Immunohistochemical staining was performed using an automated BOND-III instrument (Leica Biosystems, Wetzlar, Germany) with the primary antibody of HHV-8, CD138, and α-SMA. In situ hybridization was also performed for the κ and λ light chains (Leica Biosystems).

The investigators reported that on grading histological features such as vascularity, plasmacytosis (high proportion of plasma cells), atrophic and hyperplastic germinal centers (GCs), they identified significant pathological differences between the specimens of the IPL and non-IPL groups. The IPL group demonstrated greater plasmacytosis and hyperplastic GCs compared to the non-IPL group. Conversely, the vascularity of the non-IPL group was higher than that of the IPL group. Clinically, the IPL group exhibited higher platelet count and serum antibody (immunoglobulin G) levels, with lesser fluid retention in pleural and/or abdominal cavity. The frequency of disease-specific autoantibody detection was also different between the groups.

The authors concluded that their results suggest that IPL is clinicopathologically a uniform disease entity, and may be an independent subtype of iMCD. Future studies are warranted to identify diagnostics, treatment, and follow-up plans that are specific to IPL. Given the heterogeneity of the non-IPL cases, clinicians are urged to identify a primary etiology of such cases, including atypical autoimmune diseases. These cases may benefit from molecular analysis to clarify underlying pathology. The study was originally published on September 7, 2022 in the International Journal of Molecular Science.