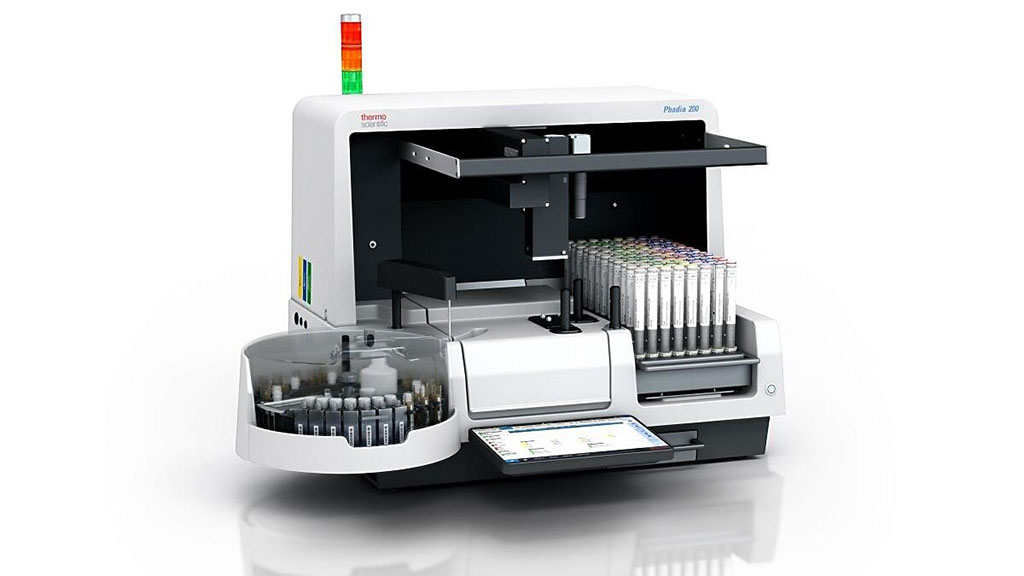 Image: The Phadia 200 instrument is small enough to fit on a benchtop, and yet capable of running the complete menu of more than 700 different ImmunoCAP and EliA tests to aid in the diagnosis of allergy and autoimmune diseases (Photo courtesy of Thermo Fisher Scientific)
Calprotectin (CLP) acts as an endogenous ligand of different cell-surface proteins like Toll-like receptor 4 and receptor of advanced glycation end-products facilitating a local proinflammatory effect. CLP is mostly secreted through an active, calcium-dependent Protein Kinase C (PKC) pathway, next to the passive leakage from necrotic cells and release in neutrophil extracellular traps (NET).

Since CLP is released at the local site of inflammation, CLP plasma levels have been suggested to be a biomarker that reflects local disease activity in inflammatory diseases, in contrast to conventional acute-phase proteins such as C-reactive protein (CRP), which are mainly produced by hepatocytes after non-specific, systemic inflammatory activity. In addition to mirroring local inflammation processes, CLP is relatively stable and easily measurable in blood.

The authors concluded that their data revealed that in both healthy controls and RA patients serum CLP levels are considerably higher in serum than in plasma. The establishment of reference values in healthy controls showed that 95% upper limits were both sample type- and CRP-dependent. Serum tubes need to be centrifuged within two hours and plasma tubes within six hours after blood collection. All investigated sample types can be stored refrigerated (2–8 °C) for up to seven days, at room temperature (18–25 °C) for up to 24 hours, frozen (−20 °C) for up to three months and can have five freeze-thaw cycles without a relevant change in CLP concentration. The study was published on March 6, 2021 in the journal Clinica Chimica Acta.