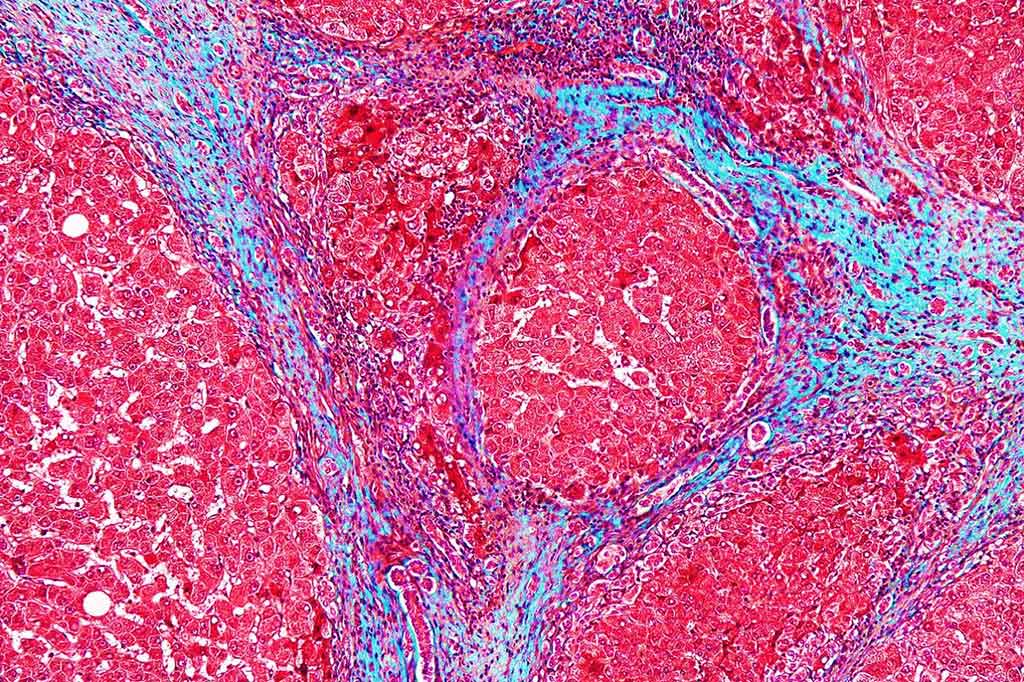 Image: High magnification photomicrograph of a liver with cirrhosis (Photo courtesy of Nephron).
Fat accumulation in the liver is common and is often seen in people with obesity or diabetes. In the worst case, fatty liver can lead to cirrhosis or liver cancer. It is unusual for this to occur but in those affected, symptoms often only occur at a late stage when there is no available treatment.

The gold standard for diagnosing fibrosis is liver biopsy, which is not reasonable to use as a screening tool in larger populations, expressly in a general population or primary care setting. Several non-invasive scores have been developed to identify individuals with prevalent advanced fibrosis. The Fibrosis-4 (FIB-4) scoring system is often used to estimate the risk of advanced fibrosis in liver diseases.

Hepatology Specialists at the Karolinska University Hospital (Stockholm, Sweden) and their colleagues tested the general hypothesis that repeated measurements of the commonly used FIB-4 index (FIB-4) would improve the identification of individuals at risk of severe liver disease compared with a single measurement. The investigators used the AMORIS cohort that contains laboratory test data in a very large population, surveyed between 1985 and 1996. More than 40,000 people had blood test data for FIB-4 from several sampling occasions. They were followed in national registers to identify those who developed cirrhosis after up to 27 years.

Hannes Hagström, MD, PhD, a Consultant in Hepatology and lead author of the study, said, “It is difficult to predict the risk of cirrhosis, although you can get some guidance in using regular blood tests that measure liver damage. We showed that this biomarker is useful for identifying people in primary care with an increased risk of cirrhosis who may need to be more carefully investigated and to exclude people who do not need this. But the method needs to be further developed to reduce the risk of false positive findings, which can lead to unnecessary examinations in healthy people.”

The authors concluded that repeated testing of FIB-4 within five years improves the identification of individuals in the general population at an increased risk of severe liver disease. The study was published on July 1, 2020 in the Journal of Hepatology.