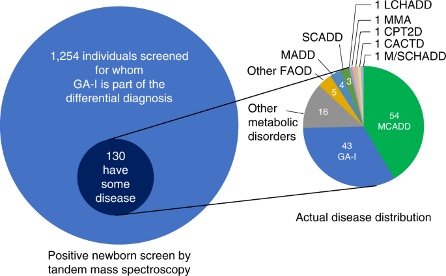 Image: The role of exome sequencing in newborn screening for inborn errors of metabolism. Low positive predictive value and complex differential diagnoses of MS/MS newborn screening for glutaric academia-1 (Photo courtesy of University of California Berkeley).
Inborn errors of metabolism (IEM) form a large class of genetic diseases involving congenital disorders of metabolism. The majority are due to defects of single genes that code for enzymes that facilitate conversion of various substrates into others products.

Dozens of congenital metabolic diseases are now detectable by newborn screening (NBS) tests, especially expanded testing using mass spectrometry. This is an increasingly common way for the diagnosis to be made and sometimes results in earlier treatment and a better outcome.

A large team of scientist led by those at the University of California Berkeley (Berkeley, CA, USA) selected a subset of dried blood spots from 1,200 deidentified newborns for exome sequencing in discovery and validation stages of the study. That set included more than 800 newborns with known IEMs, along with 385 infants who had false-positive IEM results with tandem mass spec-based screening.

The team’s analysis focused on 78 genes previously implicated in four-dozen forms of IEM that are currently included in newborn screening programs in California. The NBSeq project evaluated whole-exome sequencing (WES) as an innovative methodology for NBS. The team found that the exome sequencing-based strategy could pick up authentic IEM with 88% sensitivity, compared to 99% sensitivity with tandem mass spec-based testing. The exome sequencing screening arm of the study uncovered IEMs with more than 98% specificity, while the established tandem mass spec screening method had a specificity of 99.8% for detecting IEMs.

The WES alone was insufficiently sensitive or specific to be a primary screen for most NBS IEMs. However, as a secondary test for infants with abnormal MS/MS screens, WES could reduce false-positive results, facilitate timely case resolution and in some instances even suggest more appropriate or specific diagnosis than that initially obtained.

The authors concluded that newborn sequencing IEMs provide an ideal model for evaluating the role of sequencing in population screening because most are Mendelian disorders affecting well-understood biochemical pathways, and many have been studied extensively. They noted that sensitivity and specificity of sequence-based detection of IEMs can be directly compared to those of current MS/MS screening. The study was published on August 10, 2020 in the journal Nature Medicine.