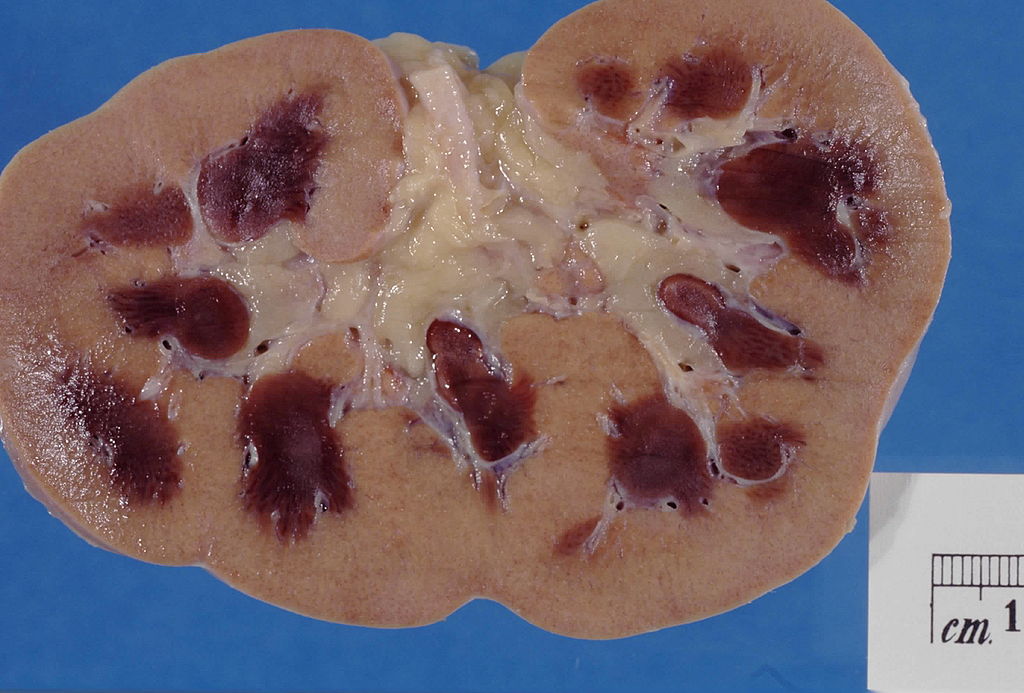 Image: Kidney specimen from patient who died with acute kidney injury. Image shows marked pallor of the cortex, contrasting to the darker areas of surviving medullary tissue (Photo courtesy of Wikimedia Commons)
A report has suggested that testing recently hospitalized kidney patients for proteinuria could be a way to identify those at higher risk for developing progressive kidney disease, which could require dialysis or surgery.

Clinicians agree that among patients who had acute kidney injury (AKI) during hospitalization, there is a need to improve risk prediction so that those at highest risk for subsequent loss of kidney function are identified for appropriate follow-up.

To this end, investigators at the University of California, San Francisco (USA) and colleagues at several other institutions worked with participants in The Assessment, Serial Evaluation, and Subsequent Sequelae in Acute Kidney Injury (ASSESS-AKI) Study. This was a multicenter prospective cohort study including four clinical centers in North America that included 1538 patients enrolled three months after hospital discharge between December 2009 and February 2015. Of the 1538 participants, 769 (50%) had AKI during hospitalization.

To detect proteinuria, the investigators measured urine albumin-to-creatinine ratio (ACR) three months after hospital discharge. The mean age of the patients was 65 years, and the median urine ACR was 15 milligrams per gram. Overall, 547 (37%) of the participants were women and 195 (13%) were black.

"There should be much more emphasis on the testing of proteinuria after AKI to identify high-risk patients," said first author Dr. Chi-yuan Hsu, professor of nephrology at the University of California, San Francisco. "This simple test carries important prognostic information not conveyed by serum creatinine. Too many providers rely on serum creatinine alone to assess the health of the kidneys, but they should not be falsely assured by the latter. Having a more complete picture of kidney health is necessary for proper clinical decision-making."

"Most patients with acute kidney injury are unaware of their condition, lack understanding of its natural history or predisposing factors, and desire more information," said Dr. Hsu. "However, few discharge communications currently provided to these patients explain the condition or provide recommendations for care, which is needed throughout the care continuum."

The AKI study was published in the January 27, 2020, online edition of the journal JAMA Internal Medicine.