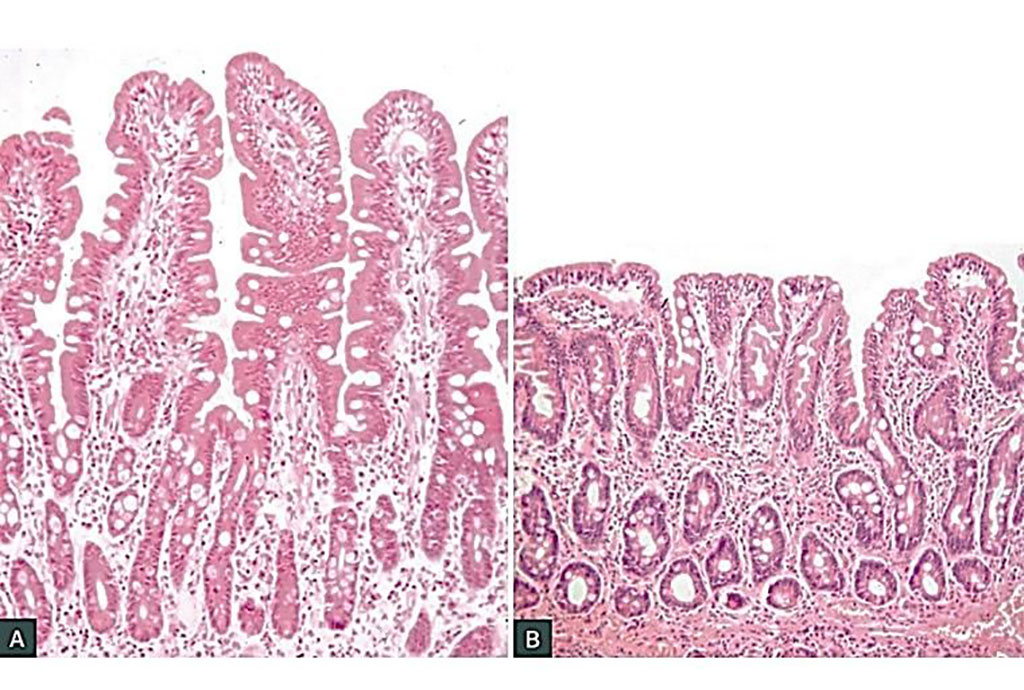 Image: Histology of normal small intestinal mucosa in adequately treated celiac disease (A). Untreated coeliac disease shows the classic triad of infiltration of the epithelium with lymphocytes, crypt hyperplasia and villous atrophy (B) (Photo courtesy of Professor Jason Tye-Din, MBBS PhD).
Until recently, many doctors often dismissed the complaints of people who claimed to be sensitive to foods containing gluten but did not have celiac disease, a well-documented autoimmune disease triggered by exposure to the dietary protein found in wheat, rye, and barley.

Celiac disease (CD) is an autoimmune enteropathy triggered by exposure to gluten proteins, leading to intestinal inflammation and villous atrophy in genetically predisposed individuals. It is associated with robust B cell and antibody responses to gluten and to the transglutaminase 2 (TG2) autoantigen.

A team of scientists from various institutions and led by those at the Columbia University Medical Center (New York, NY, USA) analyzed blood samples from 40 patients with celiac disease, 80 patients with non-celiac gluten sensitivity (NCGS), and 40 healthy controls, all of whom consumed an unrestricted, gluten-containing diet. The most common gastrointestinal symptoms included bloating, abdominal pain, diarrhea, nausea, and heartburn, while the most prominent extra-intestinal symptoms were fatigue, headache, anxiety, cognitive difficulties, and numbness in arms and legs.

The scientists reported that the anti-gliadin IgG response in CD patients was comprised primarily of IgG1 and IgG3, which were significantly increased in comparison with the healthy and NCGS cohorts. There was a modest elevation in anti-gliadin IgG2 compared with the healthy group and no comparative increase in the IgG4 subclass. Within the NCGS cohort, however, the lower contributions of anti-gliadin IgG1 and IgG3 in comparison with CD was compensated by significantly elevated IgG4 (compared with CD and healthy cohorts) and IgG2 (compared with healthy cohort). Serum concentrations of intestinal fatty acid-binding protein (FABP2), a specific marker of intestinal epithelial cell damage, were similarly elevated in the CD and NCGS groups in comparison with healthy cohort.

Armin Alaedini, PhD, an assistant professor of medicine and a senior author of the study, said, “We found that the B cells of celiac disease patients produced a subclass profile of IgG antibodies with a strong inflammatory potential that is linked to autoimmune activity and intestinal cell damage. In contrast, the patients with non-celiac gluten sensitivity produced IgG antibodies that are associated with a more restrained inflammatory response.” The study was published online July 21, 2020 in the journal Gastroenterology.