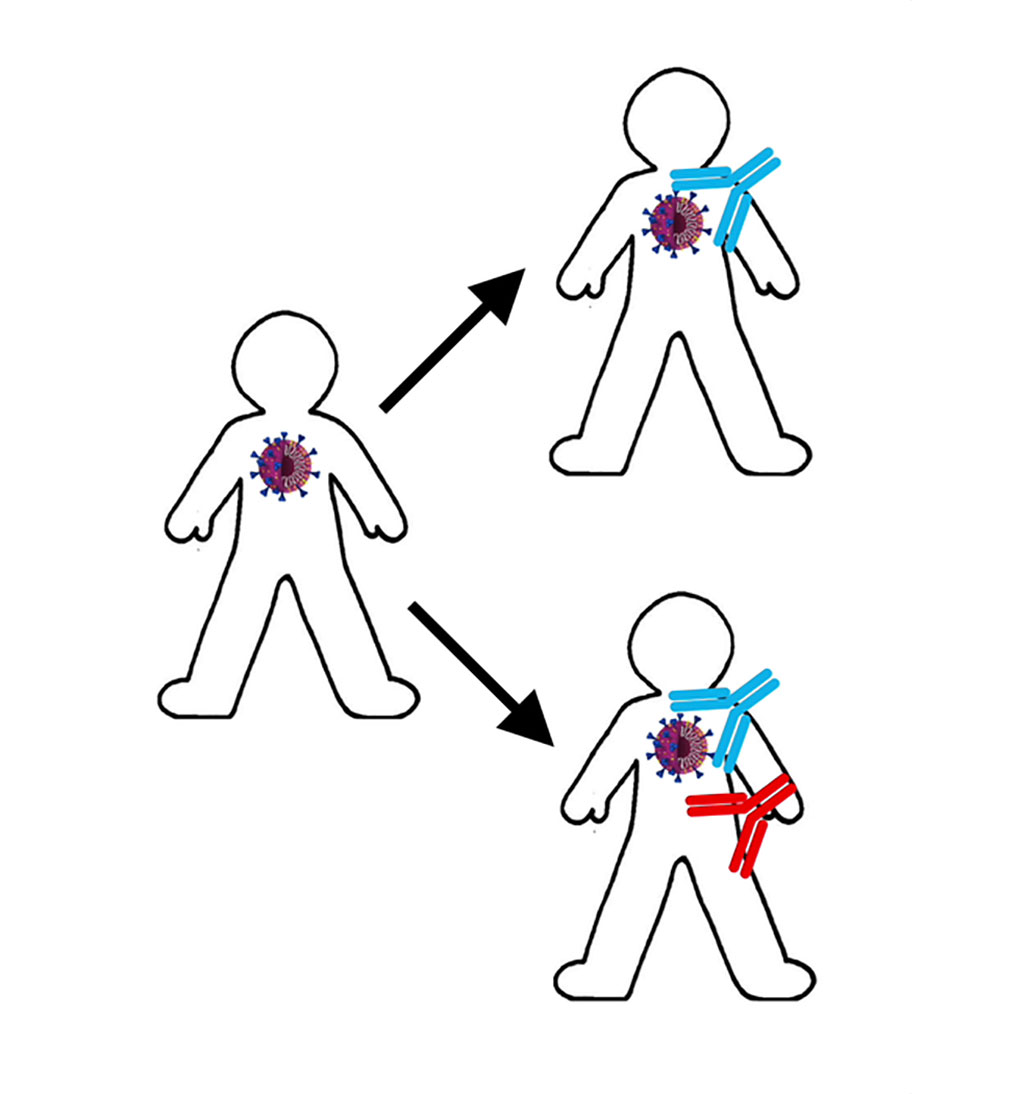 Image: Blood Test for Presence of Autoimmune Antibodies Could Help Identify COVID-19 Patients at Risk of Developing Severe Disease (Photo courtesy of Life Science Alliance)
A new study has detected special immune system defense molecules, called autoimmune antibodies, in the blood of more than a third of men and women on admission to hospital and confirmed to have COVID-19.

Among the findings of the study by researchers at NYU Grossman School of Medicine (New York, NY, USA) is that a subset of these autoimmune antibodies that bind to DNA or to a particular type of fat molecule, a lipid called phosphatidylserine, were more often twice as abundant at the start of coronavirus infection in those whose conditions worsened quickly than in those whose health did not decline. Patients with these elevated levels of autoimmune antibodies were five to seven times more likely to develop severe disease than those whose antibodies levels were stable.

People hospitalized with life-threatening cases of COVID-19, researchers say, required intensive care and a mechanical ventilator to help them breathe while those who had lower levels of these autoantibodies usually breathed on their own and largely recovered. The latest work is based on the nature of antibodies, immune proteins that target invading bacteria and viruses. By contrast, autoimmune antibodies attack an infected person’s own cells and molecules. This includes lipids and genetic material, or DNA, which are known to spill into the bloodstream as cells are killed by disease, such as COVID-19.

For the new study, researchers examined the medical records and blood tests from 115 White, Black, Asian, and Hispanic men and women hospitalized for COVID-19 at NYU Langone hospitals between April and June 2020. Roughly equal numbers had severe disease from which they either survived or died, or did not require intensive care and recovered quickly. Test results for more than 100 measurements, such as blood oxygen levels, liver enzymes, and kidney function, were compared with levels of autoimmune antibodies. The researchers designed the analysis to learn whether common autoimmune antibodies were present in COVID-19, as other studies in other infectious diseases had already suggested, and whether or not variations in blood levels were tied to how sick people became.

The researchers found that 36% of the study participants had autoimmune antibodies when they were admitted to the hospital. Levels of anti-DNA and anti-phosphatidylserine antibodies were then strongly linked to severity of illness. Specifically, 86% and 93% of patients with high levels of anti-DNA and anti-phosphatidylserine antibodies, respectively, experienced severe COVID-19. Levels of anti-DNA antibodies were also linked to increases in blood coagulation (thrombosis) and cell death (lysis), especially in muscle tissue. Researchers say both thrombosis, which can lead to life-threatening blood clots, and damage to muscle tissue, especially in the heart, have been observed in the most serious cases of COVID-19.

“Our study results show that initial blood levels of anti-DNA or anti-phosphatidylserine antibodies were directly linked to the severity of illness in those with COVID-19,” said study co-lead investigator Claudia Gomes, PhD, a postdoctoral fellow at NYU Langone Health.

“While further testing is needed, our findings suggest that a test for the presence of anti-DNA and anti-phosphatidylserine antibodies could help identify those COVID-19 patients admitted to hospital who are most at risk of needing intensive care and who need to be monitored more closely,” added Marisol Zuniga, MS, also a study co-lead investigator at NYU Langone.