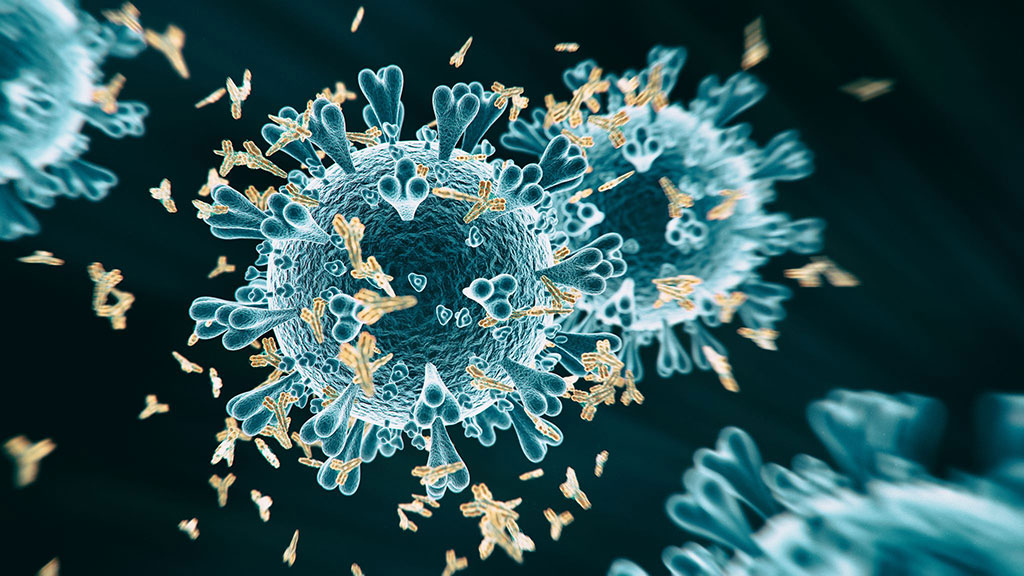 Illustration
A new saliva-based test developed by a team at Johns Hopkins Bloomberg School of Public Health (Baltimore, MD, USA) has been found to accurately detect the presence of antibodies to SARS-CoV-2 from small samples of saliva.

The test is based on multiple fragments, or “antigens,” from the SARS-CoV-2 coronavirus, mostly from its outer spike and nucleocapsid proteins. The research team had developed a saliva-based test for SARS-CoV-2 antibodies using a panel of 12 known viral antigens that are already used for blood-based antibody tests. Saliva samples for the test are collected by rubbing a sponge between people’s teeth and gums, where saliva is known to be particularly enriched with antibodies. Such tests, the results of which can be obtained in a matter of hours, are seen as potential alternatives to blood-sample antibody tests for research and clinical use.

The experiments also showed that the test could be highly specific - that is, capable of identifying those without the antibodies with a low rate of “false positives.” In a set of 134 saliva samples that had been collected from people long before the COVID-19 pandemic - and thus presumed to be free of SARS-CoV-2 antibodies - several antigens in the test gave negative results in all but a few cases. Antibodies to one viral antigen seemed particularly specific: The scientists found negative results for it in all 134 of the pre-COVID-19 samples.

Saliva-based testing for immunoglobulin G antibodies to SARS-CoV-2 appeared to be just as sensitive and specific as blood-based serological testing. After SARS-CoV-2 infection, IgG antibodies typically elevate around day 10 after symptom onset, and these antibodies spill over from the blood into saliva. The experiments on the whole have suggested that people who become infected with SARS-CoV-2 develop detectable antibodies in saliva at roughly the same time as they do in blood, about 10 days after COVID-19 symptom onset. The researchers expect that with an optimal algorithm that integrates results for just a few especially sensitive and specific antigens, their saliva-based test may be able to reliably detect SARS-CoV-2 antibodies starting around that same 10-day mark, but not earlier.

“If our saliva-based assay’s accuracy is borne out in larger studies, this noninvasive approach could make it easier to identify, at a population level, who has already had a SARS-CoV-2 infection and where gaps in seropositivity remain heading into the winter and beyond,” said study senior author Christopher D. Heaney, PhD, MS, an associate professor with appointments in the departments of Environmental Health and Engineering, Epidemiology, and International Health at the Bloomberg School. “This could inform targeted vaccination efforts and, after vaccines start to roll out, help figure out how long vaccine-induced antibodies last - all without repeated, invasive blood draws.”