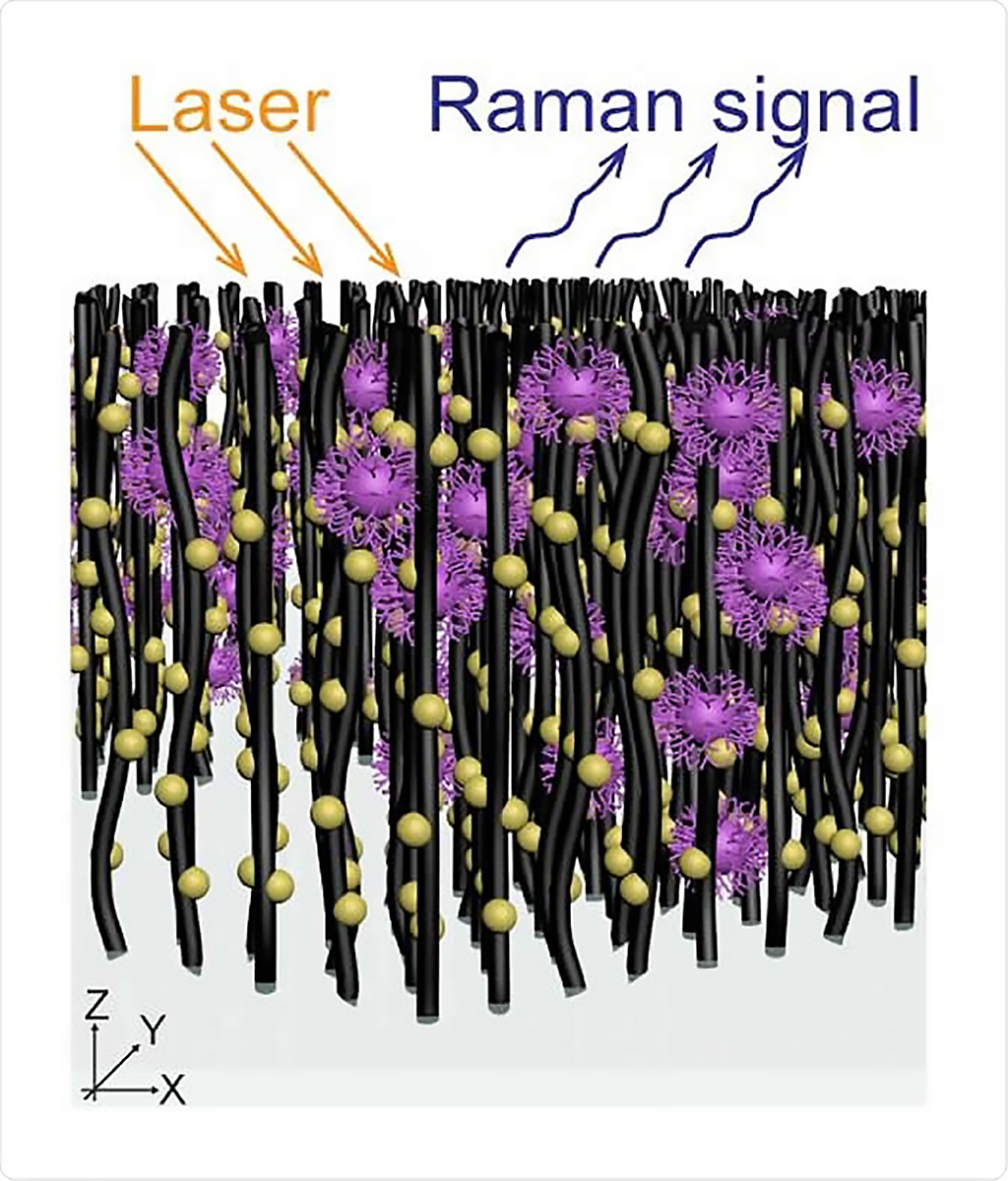 Image: Schematic of an array of nanotubes decorated with gold nanoparticles that capture virus molecules for in situ Raman spectroscopy for label-free optical virus identification (Photo courtesy of Professor Mauricio Terrones)
Currently, virologists estimate that 1.67 million unknown viruses are in animals, a number of which can be transmitted to humans. Known viruses, such as H5N1, Zika and Ebola have caused widespread illness and death. Early detection could halt virus spread by enabling rapid deployment of countermeasures.

In virus surveillance, collected samples are subjected to a series of time-consuming steps, such as ultracentrifugation and cell culture, to enrich virus particles or amplify virus titers. In addition, many viruses are not easily culturable, and bias is often introduced during amplification, leading to artifacts in the sequence data.

A team of scientists led by The Pennsylvania State University (University Park, PA, USA) team developed a portable microfluidic platform containing carbon nanotube arrays with differential filtration porosity for the rapid enrichment and optical identification of viruses. Different emerging strains (or unknown viruses) can be enriched and identified in real time through a multivirus capture component in conjunction with surface-enhanced Raman spectroscopy. More importantly, after viral capture and detection on a chip, viruses remain viable and get purified in a microdevice that permits subsequent in-depth characterizations by various conventional methods.

The team validated this platform, using different subtypes of avian influenza A viruses and human samples with respiratory infections. This technology successfully enriched rhinovirus, influenza virus, and parainfluenza viruses, and maintained the stoichiometric viral proportions when the samples contained more than one type of virus, thus emulating coinfection. Viral capture and detection took only a few minutes with a 70-fold enrichment enhancement; detection could be achieved with as little as 102 EID50/mL (50% egg infective dose per microliter), with a virus specificity of 90%.

After enrichment using the device, called the VIRRION, the scientists demonstrated by sequencing that the abundance of viral-specific reads significantly increased from 4.1% to 31.8% for parainfluenza and from 0.08% to 0.44% for influenza virus. This enrichment method coupled to Raman virus identification constitutes an innovative system that could be used to quickly track and monitor viral outbreaks in real time.

Mauricio Terrones, PhD, a professor and senior author of the study, said, “We have developed a fast and inexpensive handheld device that can capture viruses based on size. Our device uses arrays of nanotubes engineered to be comparable in size to a wide range of viruses. We then use Raman spectroscopy to identify the viruses based on their individual vibration.” The study was published on December 27, 2019 in the Proceedings of the National Academy of Sciences.