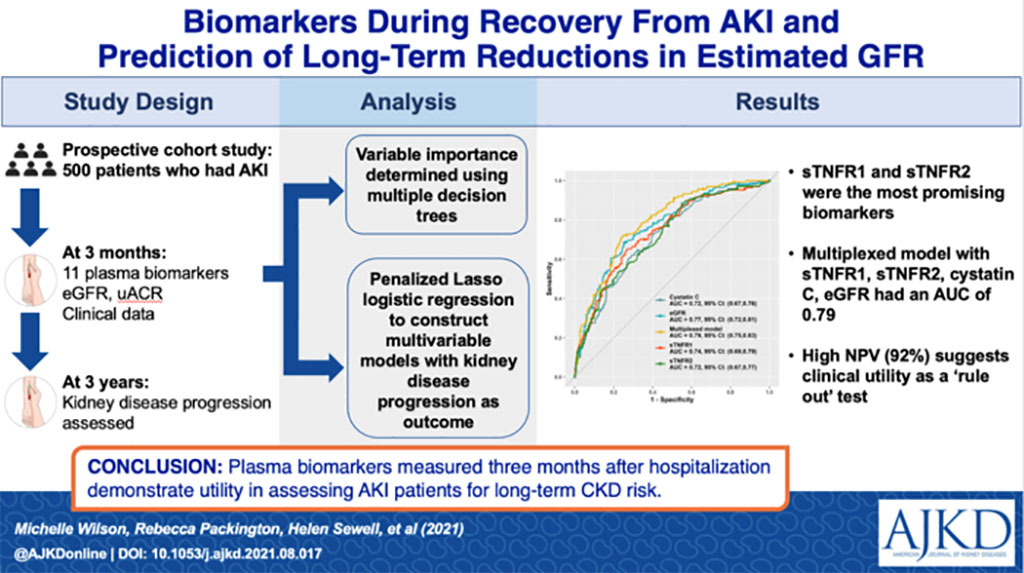 AKI may lead to a number of complications, including metabolic acidosis, high potassium levels, uremia, changes in body fluid balance, and effects on other organ systems, including death. People who have experienced AKI are at increased risk of developing chronic kidney disease in the future.

Medical Scientists at the Royal Derby Hospital (Derby, UK) and their colleagues evaluated a number of new blood tests in people who have had AKI, aiming to improve the ability to assess the risk of new or progressive kidney disease. Among a panel of 11 biomarkers tested, a combination of the most promising were identified, comprising Soluble Tumor Necrosis Factor Receptor (sTNFR)1, sTNFR2, cystatin C and eGFR. A total of 500 patients were studied that included adults from a single clinical center who developed AKI, and survived until three years after the hospitalization during which AKI occurred. Participants included those with and without pre-existing chronic kidney diseases (CKD).

The investigators reported that soluble tumor necrosis factor receptor 1 (sTNFR1), sTNFR2, cystatin C, neutrophil gelatinase-associated lipocalin (NGAL), three-month eGFR and urine albumin:creatinine ratio (ACR) were independently associated with kidney disease progression and were more important than AKI severity or duration. A multivariable model containing sTNFR1, sTNFR2, cystatin C and eGFR discriminated between those with and without kidney disease progression (AUC 0.79, 95% CI 0.7-0.83). Optimizing the cut-point to maximize utility as a ‘rule-out’ test to identify those at low risk increased the sensitivity of the model to 95% and its negative predictive value to 92%.

The authors concluded that a panel of plasma biomarkers measured 3-months after discharge from a hospitalization complicated by AKI provides potential opportunity to identify patients who are at very low risk of incident or worsening CKD. Further study is required to determine its clinical utility through independent prospective validation. The study was published on October 12, 2021 in the American Journal of Kidney Diseases.

A Device for Rapid and Accurate Diagnosis of Hepatitis C Infections

A device has been developed that enables the rapid and accurate diagnosis of hepatitis C infections under both laboratory and field conditions. Hepatitis C virus (HCV) is a major cause of liver-related... Read more

Pancreatic cancer (PC) is one of the most aggressive and lethal types of cancer. The 5-year survival rate at the time of diagnosis is about 10%, as approximately 80%–85% of patients present either unresectable... Read more

Bacterial meningitis is a potentially fatal infection of the central nervous system (CNS) that is associated with significant complications including neurologic deficits and epilepsy in the majority of survivors.... Read more

The global point-of-care (POC) coagulation testing market is set to achieve significant growth on the back of the growing geriatric population and increasing technological innovations in POC testing, although... Read more