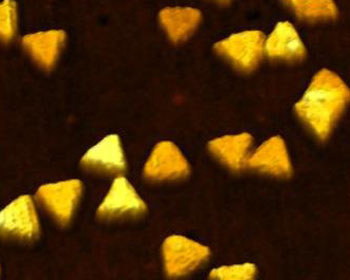 MicroRNAs (miRNAs) are fragments of RNA about 20 nucleotides long that block gene expression by attaching to molecules of messenger RNA (mRNA) in a fashion that prevents them from transmitting the protein synthesizing instructions they had received from the DNA. Although miRNAs have the ability to behave like oncogenes or tumor suppressors in a cell-autonomous manner, their exact roles following release into the circulation are only now being understood, and it is important to establish sensitive assays to measure their levels in different compartments in the circulation.

In this regard, investigators at Indiana University-Purdue University Indianapolis (USA) reported the development of an ultrasensitive localized surface plasmon resonance (LSPR)-based miRNA sensor with single nucleotide specificity. The sensor was developed using chemically synthesized gold nanoprisms attached onto a solid substrate that bestowed the device with unprecedented long-term stability and reversibility.

Plasmonic resonance is a phenomenon that occurs when light is reflected off thin metal films, which may be used to measure interaction of biomolecules on the surface. An electron charge density wave arises at the surface of the film when light is reflected at the film under specific conditions. A fraction of the light energy incident at a defined angle can interact with the delocalized electrons in the metal film (plasmon) thus reducing the reflected light intensity. The angle of incidence at which this occurs is influenced by the refractive index close to the backside of the metal film, to which target molecules are immobilized. If ligands in a mobile phase running along a flow cell bind to the surface molecules, the local refractive index changes in proportion to the mass being immobilized. This can be monitored in real time by detecting changes in the intensity of the reflected light.

The new sensor is a small glass chip that contains triangular-shaped gold nanoparticles called "nanoprisms." After dipping the chip in a sample of blood or another body fluid, the investigators used plasmon resonance to measure changes in the nanoprism's optical properties to determine the levels of specific miRNAs.

The investigators reported in the October 7, 2015, online edition of the journal ACS Nano that they had employed the sensor to specifically detect miRNA-10b at the attomolar (10-18 molar) concentration in pancreatic cancer cell lines, derived tissue culture media, human plasma, and media and plasma exosomes. In addition, for the first time, this label-free and nondestructive sensing technique was used to quantify miRNA-10b in highly purified exosomes isolated from patients with pancreatic cancer or chronic pancreatitis, and from normal controls. The investigators showed that microRNA-10b levels were significantly higher in plasma-derived exosomes from pancreatic ductal adenocarcinoma patients when compared with patients with chronic pancreatitis or normal controls.

Senior author Dr. Murray Korc, professor of cancer research at Indiana University-Purdue University Indianapolis, said, "Diagnosis of pancreatic cancer at an early stage of the disease followed by surgical removal is associated with a 40% five-year survival. Diagnosis of metastatic pancreatic cancer, by contrast, is associated with life expectancy that is often only a year or less. If we can establish that there is cancer in the pancreas because the sensor detects high levels of microRNA-10b or one of the other microRNAs associated with that specific cancer, we may be able to treat it sooner." 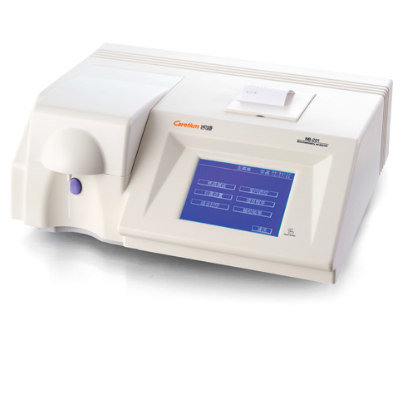