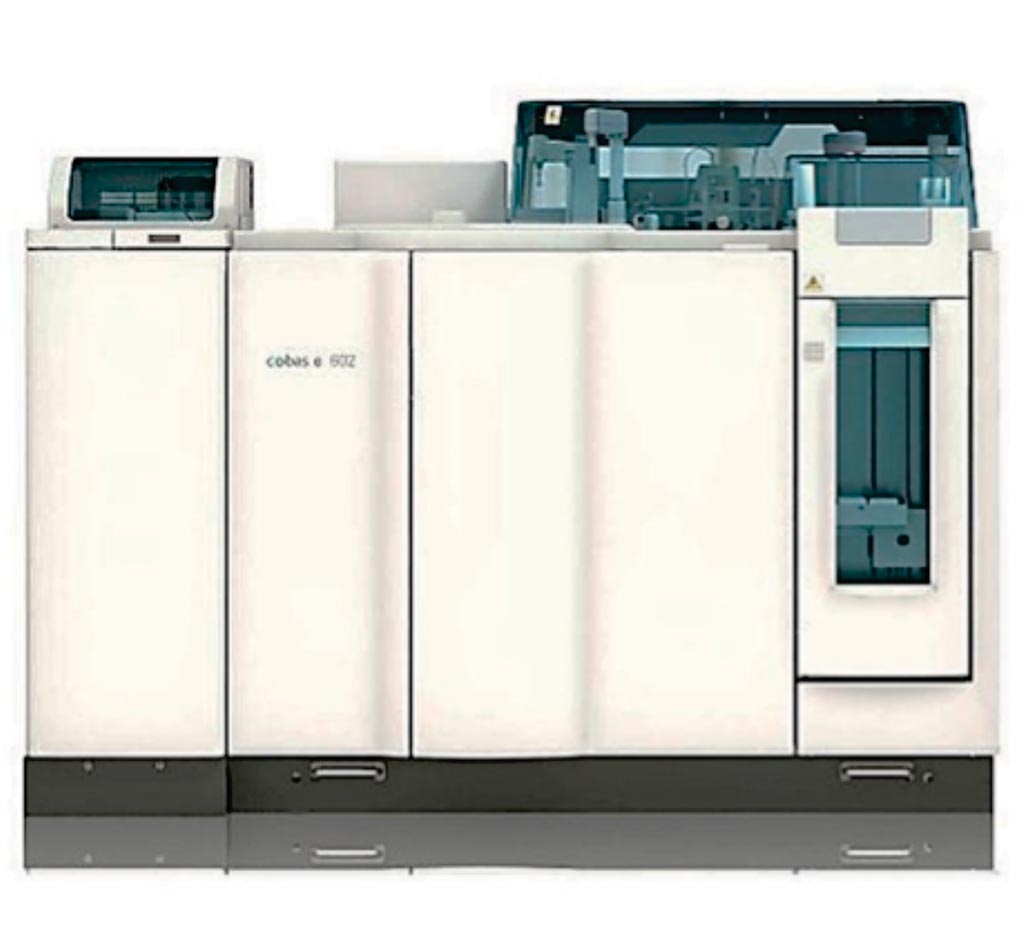 Image: The cobas e 602 integrates immunoassay and clinical chemistry testing on a single platform (Photo courtesy of Roche).
Syphilis caused by Treponema pallidum is a chronic bacterial infection. T. pallidum cannot be cultured in vitro, and new molecular tests for syphilis are unlikely to replace serology in the short term because they are fairly expensive and require sophisticated equipment.

Scientists at the Sungkyunkwan University School of Medicine (Seoul, Republic of Korea) collected samples from 4,771 subjects included in a study. They performed rapid plasma reagin (RPR), electrochemiluminescence immunoassay (ECLIA), and Treponema pallidum particle agglutination (TPPA) according to these three algorithms. The fluorescent treponemal antibody absorbed (FTA-ABS) test was additionally applied for discordant cases between the RPR and ECLIA results. The FTA-ABS results and the consensus of three algorithms were considered a gold standard.

The non-treponemal test, a quantitative RPR, the Mediace rapid plasma reagin test was performed on the Roche P800. The treponemal test, the Roche Diagnostics’ Elecsys Syphilis assay, which is an automated ECLIA, was performed using the Roche e602 platform and interpreted according to 1.0 cutoff index (COI). The automated ECLIA simultaneously detects anti-treponemal IgG and IgM antibodies using recombinant TP antigens such as TpN15, TpN17, and TpN47. The FTA-ABS IgG and IgM were also tested in the specimens showing discordance among the RPR, ECLIA, and TPPA results for confirmation.

The team reported that a total of 208 subjects were diagnosed with syphilis. The traditional algorithm had a sensitivity of 25.96%, specificity of 100%, and accuracy of 96.8%. Both the reverse and European Centre for Disease Prevention and Control (ECDC) algorithms showed the same diagnostic performance, sensitivity of 95.2%, specificity of 99.96%, and accuracy of 99.75%. The agreements between the traditional algorithm and the other algorithms were 96.9% with a kappa value of 0.415.

The authors concluded that their study indicated that the reverse or ECDC algorithm using the ECLIA as a first-line screening test and the TPPA as a second treponemal test could detect more cases of missed serodiagnosis by the traditional algorithm. The reverse algorithm could contribute to the appropriate serodiagnosis of syphilis with superior diagnostic performance. The study was published in the March 2019 issue of the International Journal of Infectious Diseases.