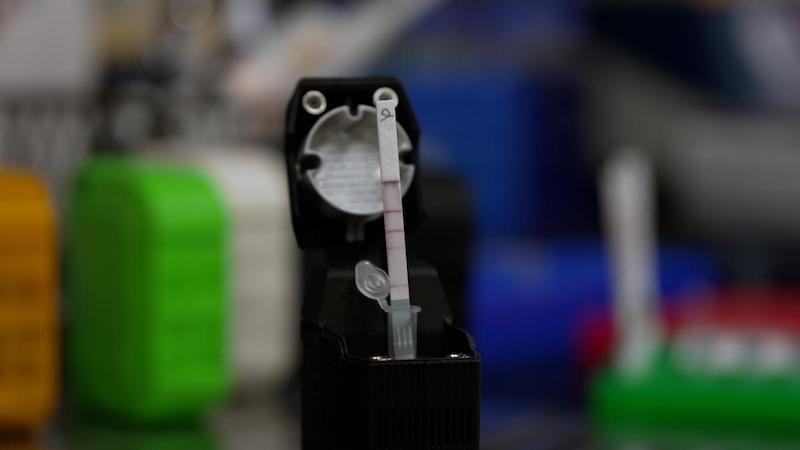 Efforts by researchers to identify and track variants of the SARS-CoV-2 virus has led to the creation and future implementation of a new method to “fingerprint” all currently known COVID-19 mutations.

The method developed by researchers at the UW School of Medicine (Seattle, Wash., (USA) identifies the presence of dozens of mutations at once and requires only three ingredients: a dipstick, a common thermocycler instrument, and a processed test sample. Upon coming into contact with the sample, the dipstick records which variant is present by exposing a series of lines, or bands. Every known variant of interest and concern has a correlating band pattern, which the test administrator can match to the sample.

Currently the definitive method of tracking variants of the virus, including the delta variant, is done through genomic sequencing. The process is thorough but can take up to two weeks to collect a sufficiently large batch of samples and yield results. The new method provides high-resolution results much more quickly, with a single or a few samples in hand. A grant awarded through the National Institutes of Health is fueling the development of the test, which will also include a barcode component that can be scanned through a smartphone app. The app connects the user to a database of all variant fingerprints. Preprogrammed and battery-capable thermocyclers will also be made available for distribution with test materials.

The test is already available as a prototype in the form of a same-day to next-day service in the UW School of Medicine lab on a collaborative basis, while a wider distribution of the full kit for clinical epidemiologists and researchers could come by this winter. The method is also designed with a key ability: potentially tracking new variants as they emerge, according to the researchers.

“It's a rapid test. We can identify the variant within two hours of the sample being in hand,” said UW School of Medicine Microbiology Professor Evgeni Sokurenko. “With emergence of new variants, generally, what we see right now involves a new combination of the known mutations. So we will be able to detect with this test, [the] emergence of new combinations of mutations, meaning new variants.”