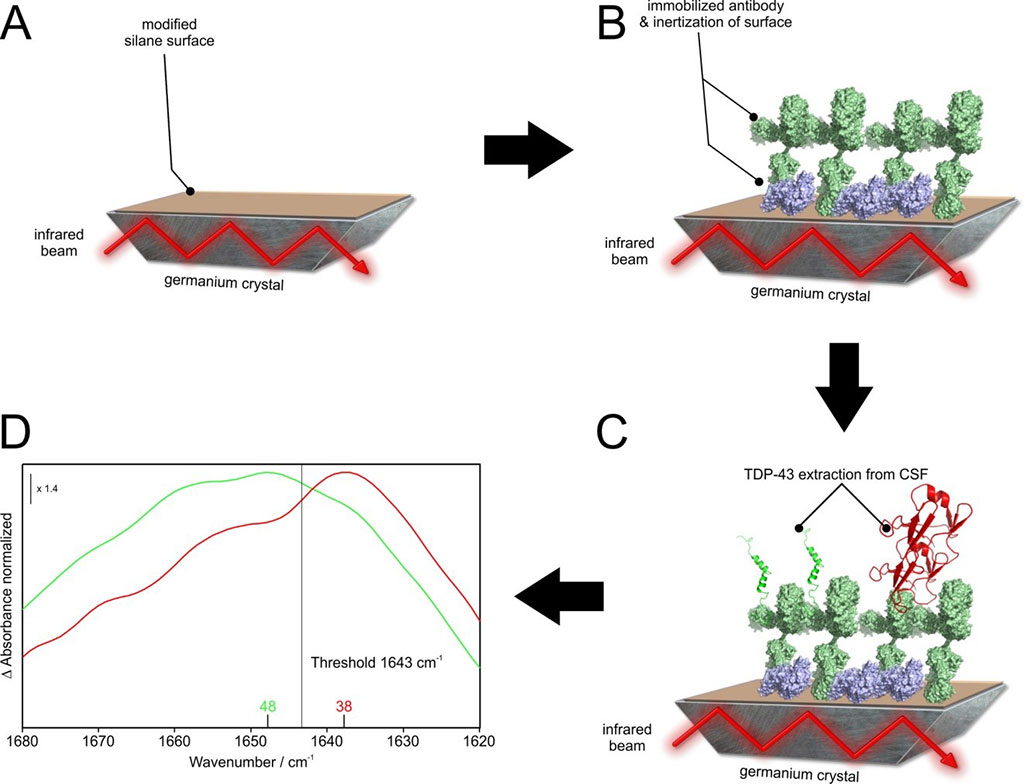 Image: Schematic illustration of the immuno‐infrared sensor. Using oligoclonal capture antibodies, all TDP‐43 isoforms are extracted out of CSF (Photo courtesy of Ruhr University Bochum).
Amyotrophic Lateral Sclerosis (ALS) is a fatal neurodegenerative disease causing a rapid loss of motor function, which usually results in a serious condition with early death within a few years. So far, early and precise diagnosis of the disease has been difficult.

To date, one of the key challenges in ALS diagnostics is to exclude other mimicking diseases, which are assessed based on clinical and electrophysiological parameters, while disease‐specific diagnostic and prognostic biomarkers are still lacking. In ALS, the TDP-43 protein in particular plays a pivotal role. It forms small inclusions in nerve cells. TDP-43 inclusions appear to have crucial pathomechanistic significance and are the neuropathological markers in sporadic and many genetic ALS cases.

A multidisciplinary team of scientists working with the Ruhr University Bochum (Bochum, Germany) analyzed the secondary structure distribution of TDP‐43 in cerebrospinal fluid of 36 ALS patients compared to 30 Parkinson´s disease patients (PD) and 34 further controls (Ctrl) using the immuno‐infrared sensor technology. The immuno‐infrared sensor is a universal technology that provides a relative measure directly reflecting the secondary structure distribution of a biomarker in a biofluid. The samples are analyzed in a flow‐through system.

The team succeeded in securing a diagnosis of ALS based on the altered structure of the protein TDP-43. In the process, they showed that the proteins fold from predominantly disordered and helical structures to so-called ß-sheets. These shapes promote damage assemblies and deposits of the protein in nerve cells. In the analysis, 36 ALS patients were distinguished from 30 Parkinson's patients by means of the TDP-43 signal with a sensitivity of 89% and a specificity of 77%. In addition, a control group with neurologically inconspicuous patients was differentiated with a sensitivity of 89% and a specificity of 83%. By analyzing TDP-43, the investigators were able to exclude other diseases that affect motor function, such as Parkinson's disease.

Léon Beyer, MSc, one of the lead authors of the study and PhD student at the Prodi Biospectroscopy Department, said, “This achievement may provide new insight into the mechanisms of the disease. Compared to other methods that reflect concentrations of certain proteins, our infrared sensor technology gives insights into molecular events and may therefore become a crucial tool in the future for diagnosing and for developing clinical therapies. First and foremost, however, it will contribute greatly to a more precise understanding of diseases.”

The authors concluded that their findings demonstrate that TDP‐43 misfolding measured by the immuno‐infrared sensor technology has the potential to serve as a biomarker candidate for ALS. The study was published on December 3, 2020 in the journal Annals of Clinical and Translational Neurology.