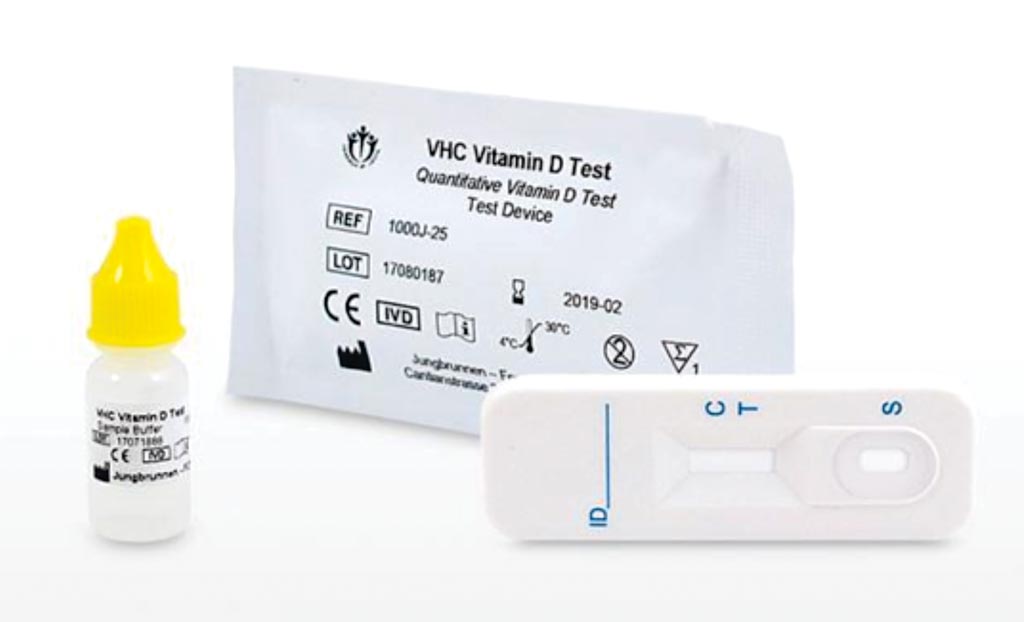 Image: The VHC Quantitative Vitamin-D Test is an immunochromatography-based one step in vitro point of care test (Photo courtesy of Nouveau Health).
Vitamin D deficiency can lead to a loss of bone density, which can contribute to osteoporosis and fractures. Vitamin D deficiency is a widely prevalent and easily correctable risk factor for early death, and evidence for its link to mortality comes from numerous studies and clinical trials.

The majority of these studies to date have however come from looking at older populations, and the some investigators believe that many of the largest scale studies may have been affected by increased rates of vitamin D supplementation in old age. In older adults, because the skin doesn't make vitamin D when exposed to sunlight as efficiently as when they were young, and their kidneys are less able to convert vitamin D to its active form.

Scientists at the Medical University of Vienna (Vienna, Austria) studied data from the records of all 78,581 patients (mean age 51.0 years, 31.5% male) who had a vitamin D (25-hydroxy-vitamin D) measurement taken, which was then matched with the Austrian national register of deaths. The first three years of mortality following the vitamin D measurement were excluded from the analysis, and patients were followed for up to 20 years where possible, with a median follow-up of 10.5 years. The team used a blood level of vitamin D 50 nmol/L, a commonly used cut-off value for vitamin D deficiency, as their reference value to which other levels would be compared, and set their low and high levels for which risk would be calculated at 10 nmol/L and 90 nmol/L respectively.

The scientists found that vitamin D levels of 10 nmol/L or less were associated with a 2-3 fold increase in risk of death, with the largest effect being observed in patients aged 45 to 60 years (2.9 times increased risk). Levels of 90 nmol/L or greater were associated with a reduction in all-cause mortality of 30%-40%, again with the largest effect being found in the 45 to 60-years-old age group (a 40% reduction in risk). No statistically significant associations between vitamin D levels and mortality were observed in patients over the age of 75.

Further subdivision of these non-cardiovascular, non-cancer causes of death revealed the largest effect of vitamin for diabetes with a 4.4 times higher risk of death from the disease in the vitamin D deficient group (less than or equal to 50 nmol/L) than for study participants whose serum vitamin D was above 50 nmol/L. Plotting the risk of death according to vitamin D level in the various subgroups did not support a risk resurgence at higher vitamin D levels above 100 nmol/L.

The authors concluded that their survival data from a large cohort, covering all age groups, from a population with minimal vitamin D supplementation at old age, confirm a strong association of vitamin D deficiency of less than 50 nmol/L with increased mortality. This association is most pronounced in the younger and middle-aged groups and for causes of deaths other than cancer and cardiovascular disease, especially diabetes. The study was presented at the Annual Meeting of the European Association for the Study of Diabetes (EASD) held September 16-20, 2019, in Barcelona, Spain.