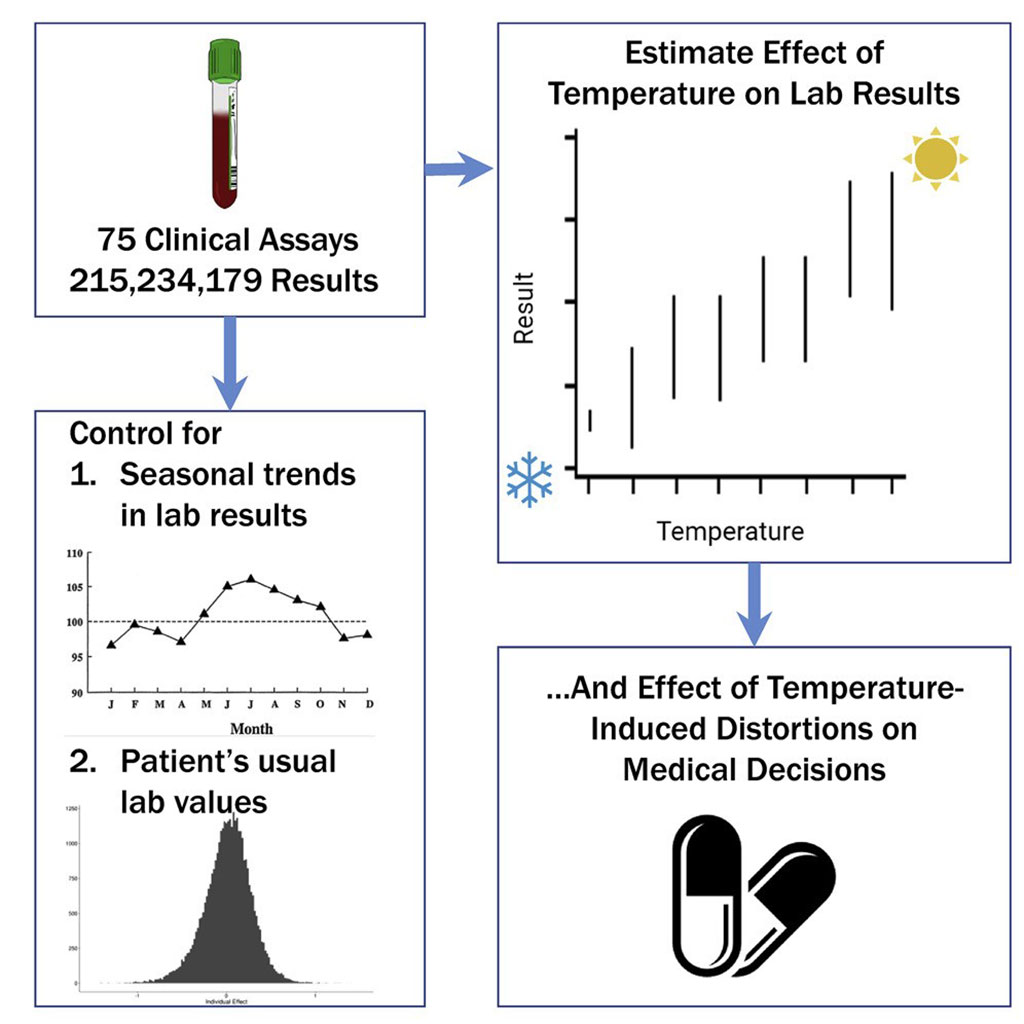 These test including acute variations in plasma volume, body temperature, circadian rhythms, but can also vary for more idiosyncratic reasons from one phlebotomy to the next, like differences in technique or sample processing. The effect of ambient temperature on the day blood is drawn has been explored.

Health scientists at the University of California, Berkeley (Berkeley, CA, USA) and from the University of Chicago (Chicago, IL, USA) analyzed a large dataset of test results from 2009 to 2015, spanning several climate zones. In a sample of more than four million patients, they modeled more than two million test results as a function of temperature. They measured how day-to-day temperature fluctuations affected results, over and above the patients’ average values, and seasonal variation. In the dataset were 4,877,039 individuals who had laboratory result data. Daily temperature ranges from a low of −28 °C (Fairbanks, AK, USA; February 16, 2011) to 49 °C (Yuma, AZ, USA; July 23, 2014).

The investigators reported that the results showed that temperature affected more than 90% of individual tests and 51 of 75 assays, are significantly affected by temperature, including measures of kidney function (increased creatinine, urea nitrogen, and urine specific gravity), cellular blood components (decreased neutrophils, erythrocytes, and platelets), and lipids (increased high-density lipoprotein [HDL] and decreased total cholesterol, triglycerides, and low-density lipoprotein [LDL]). These small, day-to-day fluctuations did not likely reflect long-term physiological trends. For example, lipid panels checked on cooler days appeared to suggest a lower cardiovascular risk, leading to almost 10% fewer prescriptions for cholesterol-lowering drugs called statins to patients tested on the coolest days compared to the warmest days, even though these results probably did not reflect stable changes in cardiovascular risk.

One practical implication of the study is that laboratories could statistically adjust for ambient temperature on the test day when reporting laboratory results. Doing so could reduce weather-related variability at a lower cost than new laboratory assay technology or investments in temperature control in transport vans. In practice, decisions on adjustment would need to be at the discretion of the laboratory staff and the treating physician, potentially on a case-by-case basis.

Ziad Obermeyer, MD is the Distinguished Associate Professor of Health Policy and Management and first author of the study, said, “The textbook way of thinking about medical investigation is bench to bedside. First, we come up with a hypothesis, based on theory, then we test it with data. As more and more big data comes online, like the massive dataset of laboratory tests we used, we can flip that process on its head: discover fascinating new patterns and then use bench science to get to the bottom of it. I think this bedside-to-bench model is just as important as its better-known cousin because it can open up totally new questions in human physiology.”

The authors concluded that ambient temperature affects the results of many laboratory tests. These distortions, in turn, affect medical decision-making. Statistical adjustment in reporting is feasible and could limit undesired temperature-driven variability. The study was published on December 10, 2021 in the new journal MED.