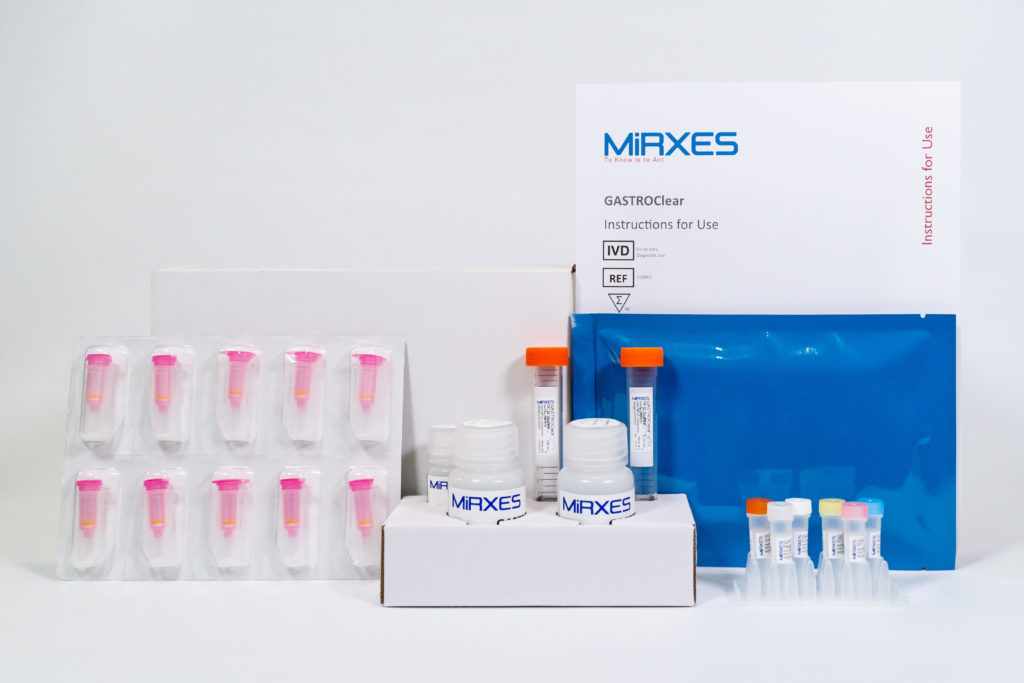 Each year, over one million people worldwide are diagnosed with gastric (stomach) cancer and over 800,000 people die of the disease. It is among the top five deadliest cancers worldwide for both men and women. Gastric cancer is curable if detected early but typically causes no symptoms in the early stages of the disease. Knowing one’s risk of gastric cancer and managing that risk by taking action to get screened regularly before experiencing any symptoms is the key to early detection. Now, a first of its kind test in the world is designed to detect gastric cancer in people who may not yet be experiencing any symptoms.

MiRXES Pte Ltd.’s (Singapore) GASTROClear is the world’s first approved molecular blood test for early detection of gastric cancer that measures the levels of microRNA in the blood, specifically picking up 12 microRNAs (miRNAs) that are associated with gastric cancer. Diseases often have abnormal expression of certain miRNAs, so when a disease occurs, it is possible to detect changes in the levels of these miRNAs. Testing with the CE IVD marked GASTROClear test allows doctors to assess the risk of gastric cancer, and help patients manage that risk and take action early for the best possible outcome.

Regular screening can increase the chances of detecting gastric cancer in the early stages, so that timely life-saving treatment can be administered. Gastric cancer is typically diagnosed through gastroscopy, also known as upper gastrointestinal endoscopy, with biopsy. However, this method is costly and invasive, sometimes requiring anesthesia. During this procedure, a doctor uses a tube with a light and camera on it to look for any physical changes on the surface of the upper digestive tract. Compared to gastroscopy, GASTROClear is a minimally invasive and less time-consuming method of screening for gastric cancer.

MiRXES has now launched a project for the discovery and validation of new combinations of biomarkers that can detect multi-cancer early. Project CADENCE (Cancer Detected Early caN be CurEd) is the world’s first large-scale clinical research project for the discovery and validation of combinations of blood-borne circulating microRNA (miRNA) and DNA methylation biomarkers that enable the development of a multi-cancer early detection test for up to nine high incidence and high mortality cancers including lung, breast, colorectal, liver, stomach (gastric), esophageal, ovarian, pancreatic and prostate cancers. Project CADENCE is expected to recruit more than 12,000 individuals including healthy average-risk individuals, high-risk individuals, patients with benign conditions, and newly diagnosed, treatment native cancer patients, and produce a significant number of intellectual property rights created on single- and multi-cancer biomarkers and test kits.

“Following our 2019 launch of GASTROClear, the world’s first miRNA-based blood cancer early detection test, Project CADENCE is our most ambitious effort to date,” said Zhou Lihan, co-founder and CEO for MiRXES. “This is where we will leverage our proprietary technologies, a decade long RNA clinical test development experience, and Singapore’s strong clinical research and translation infrastructure, to develop a novel blood test that offers physicians and at-risk individuals the earliest possible signs of multiple solid cancers through a wholistic analysis of miRNA and DNA biomarkers.”