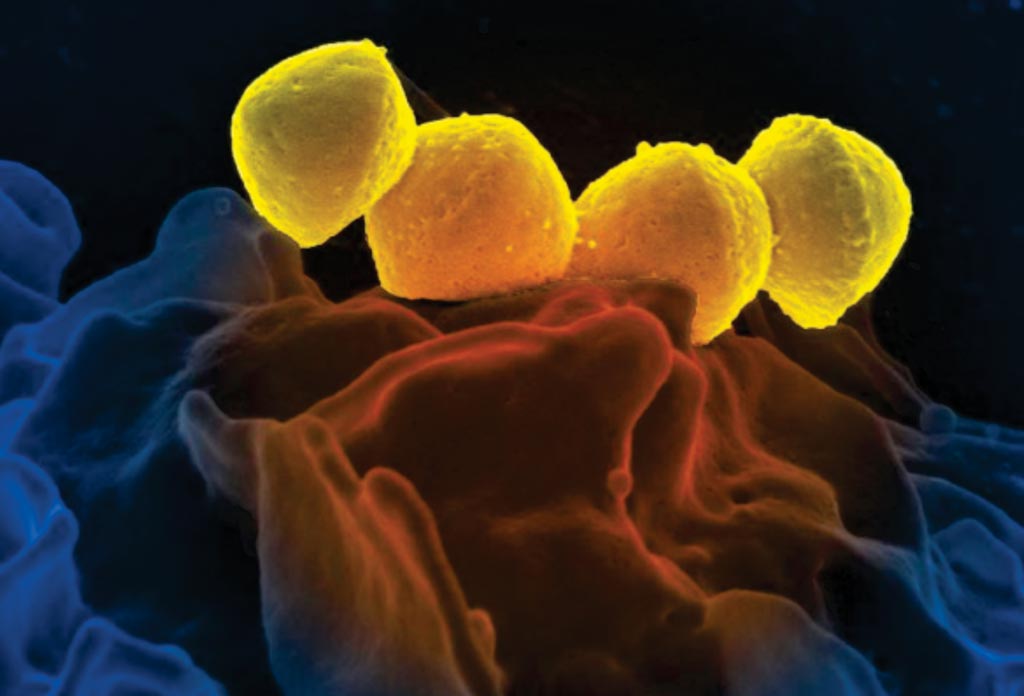 Image: This digitally colorized scanning electron microscopic (SEM) picture depicts four, yellow colored, Group A Streptococcus (GAS), Streptococcus pyogenes bacteria, which were atop the surface of a human white blood cell (WBC), known as a neutrophil (Photo courtesy of the US National Institute of Allergy and Infectious Diseases).
Scarlet fever is a classic exanthem of childhood caused by the bacterium Streptococcus pyogenes (group A streptococcus). Symptoms, which affect young children, include a high temperature, sore throat, and a pink-red rash that feels like sandpaper.

Scarlet fever is caused by toxins released by the bacterium Streptococcus pyogenes, also known as Strep A, and cases follow a seasonal pattern peaking between March and May. Scarlet fever is easily treated with antibiotics. In the UK, cases of invasive infections caused by the same bacterium have increased in 2016 compared to the previous five years.

Infectious disease specialists at the Imperial College London (London, UK) and their colleagues identified the Strep A strains causing infections in London and more widely in England and Wales, as defined by the type of emm gene present. They found that the initial upsurge of scarlet fever in 2014 in London was associated with Strep A strain types emm3 and emm4. However, during the spring of 2015 and 2016, emm1 strains became dominant among throat infections.

In Spring 2014, only 5% (5/96) of isolates of the bacterium collected in northwest London were emm1 strains, but by 2015, this had increased to 19% (28/147). In 2016, emm1 became the single most frequent strain at 33% (47/144 isolates). To investigate the emm1 isolates further, scientists sequenced the genomes of all 135 non-invasive emm1 isolates of the bacterium, collected in northwest London between 2009 and 2016, and all 552 invasive emm1 isolates collected in England and Wales during the seasonal disease spikes between 2013 and 2016, and compared them with one another. They assessed how much toxin was produced by different emm1 strains.

The investigators found that the majority of emm1 strains from 2015 and 2016 were a distinct, breakaway emm1 clone, which they refer to as M1UK. The clone had 27 unique mutations, and was associated with significantly increased production of the toxin streptococcal pyrogenic exotoxin A (SpeA). This toxin triggers scarlet fever and may contribute to Strep A pharyngitis and some invasive infections. Analysis confirmed that M1UK produces nine times more toxin than other emm1 strains (190 ng/mL compared to 21 ng/mL). It was present in England as early as 2010 and by 2016, M1UK represented 84% of all emm1 genomes analyzed in England and Wales.

Shiranee Sriskandan, FRCP, a Professor of Infectious Diseases and senior author of the study, said, “The distinct bacterial clone we have discovered appears so far to be largely limited to the UK, but the fact that we have identified two examples of it elsewhere suggests it has the potential to spread internationally and may already be present in other countries. However, it's also possible that the lineage will not last. In the past, some lineages have appeared and then disappeared quickly.” The study was published on September 10, 2019, in the journal The Lancet Infectious Diseases.