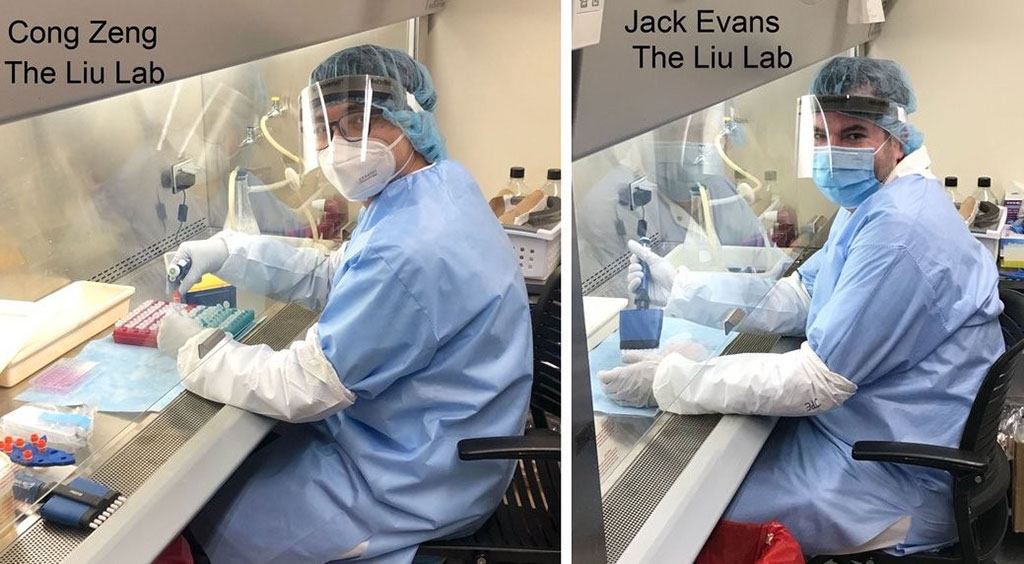 Image: Cong Zeng and Jack Evans were first authors of a paper describing a new assay that detects neutralizing antibodies against SARS-CoV-2 (Photo courtesy of Ohio State News)
Scientists have developed a new lab testing procedure for the detection of antibodies against SARS-CoV-2 that gives results more quickly than existing assays and specifically identifies so-called “neutralizing” antibodies - those that protect by blocking infection of cells.

Knowing that a person has developed antibodies against the SARS-CoV-2 virus after recovering from COVID-19 doesn’t tell everything about his/her immunity. The levels and even types of antibodies can differ among patients, and those differences can influence whether a person is protected against being reinfected. Scientists at The Ohio State University (Columbus, OH, USA) developed what is called a “pseudotype” virus neutralizing antibody assay, in which an HIV vector and core is coated with the SARS-CoV-2 spike protein to detect antibodies against the coronavirus. The team applied a new approach by selecting a different form of light-producing enzyme that can be detected conveniently in culture media containing the virus-infected cells. That choice saved several steps, and time, in the detection process without losing accuracy and sensitivity to the target virus.

The team analyzed 221 patient blood samples to validate the effectiveness of the assay and verify that the detection test could be scaled up for widespread screening. The results showed that, in general, hospitalized patients - and ICU patients in particular - had the highest concentrations, or titers, of neutralizing antibodies in their systems. However, over 14% of those who had been hospitalized had no or very low levels of antibodies. Among the health care professionals, 40% were negative for neutralizing antibodies and 36% had low concentrations. And more than half of the convalescent blood donors had concentrations of antibodies that were too low to qualify them as donors for treatment of COVID-19 patients. The assay detected no SARS-CoV-2 antibodies in the samples from people who had been sick with other types of respiratory diseases. The test accuracy was further validated by verifying in a lab setting that the antibodies detected in the COVID-19 patient blood samples did in fact neutralize the authentic SARS-CoV-2 virus. It won’t be long before the assay is put to a larger test.

“With many assays currently in use, we can detect antibodies, but that doesn’t tell us if they’re neutralizing antibodies. We only know the level of antibodies someone has,” said Shan-Lu Liu, professor in the Ohio State College of Veterinary Medicine’s Department of Veterinary Biosciences and the senior author of a new journal article describing the assay. “Some antibodies might be protective, some might not be protective, and some might even enhance infection – we know with this type of coronavirus and some other viruses, some antibodies can even do harm,” he said. “Our assay examines whether antibodies are potentially protective, which means they prevent a patient from reinfection and block viral replication. That’s the outcome of infection that we want people to have.”