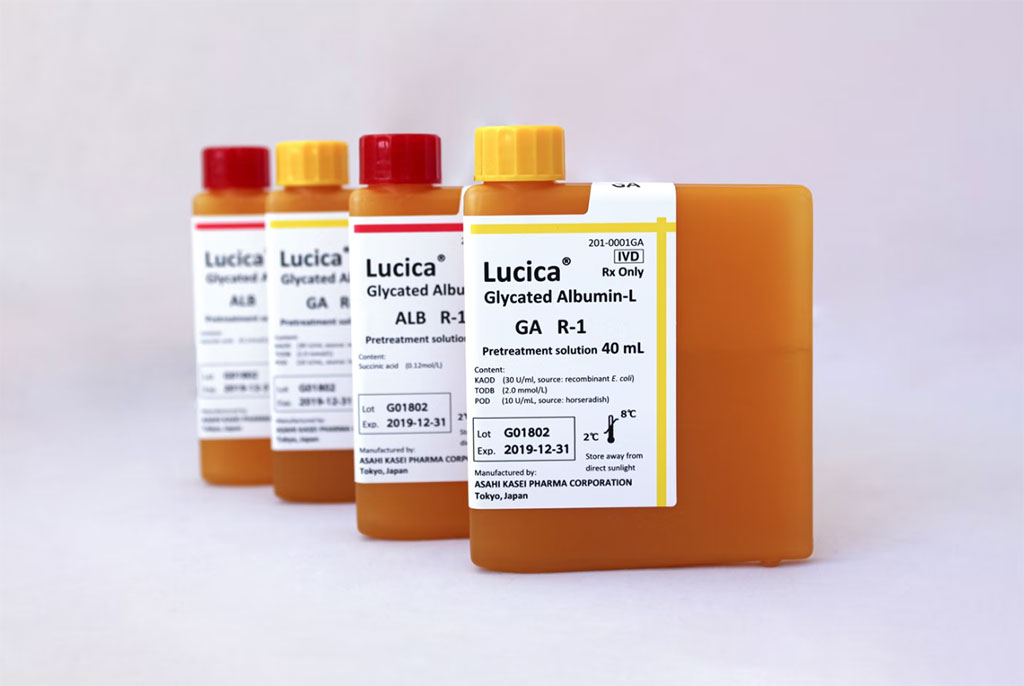 Image: The Lucica Glycated Albumin-L assay is a new diagnostic test for measuring GA. The test is based on an enzymatic method that uses liquid reagents requiring no preparation (Photo courtesy of Asahi Kasei Pharma Corporation)

Diabetes is a complex, chronic illness requiring continuous medical care with multifactorial risk-reduction strategies beyond glycemic control. Hemoglobin A1c (HbA1c) reflects the concentration of mean plasma glucose (MPG) over the last 2–3 months and has been the gold standard for monitoring glycemic control of diabetic patients in clinical practice.

Glycated Albumin (GA) is an intermediate-term glycemic indicator that reflects the glycemic control status for the previous 2–3 weeks due to the albumin half-life. GA is an important HbA1c substitute for assaying samples with hemoglobin variants and abnormal hemoglobin metabolism because it is unrelated to this pathway. More importantly, GA changes quicker than HbA1c and might be a useful marker for detecting short-term changes of glycemic control during treatment.

Scientists specializing in diagnostics from the Asahi Kasei Pharma Corporation (Yurakucho, Japan) evaluated the performance of the company’s Lucica Glycated Albumin-L, a new GA assay that is traceable to standard reference materials and determined the reference range in healthy subjects without diabetes. They confirmed the reference range of GA in a healthy, non-diabetic population in the USA following CLSI Guideline EP28-A3C. A single-visit 2-site study in the United States was designed. The observed value of GA in subjects with diabetes was confirmed following the same CLSI Guideline. One hundred and fifty subjects with diabetes (≥18 years of age) from eight different sites were tested. The team compared the standardized new GA assay with the old assay and developed the GA reference range in healthy subjects without diabetes in the USA.

The investigators reported that the coefficient of variation (CV) of overall repeatability, within-laboratory precision, and overall reproducibility values of GA values were not more than 2.6%, 3.3%, and 1.6%, respectively, among laboratories. The GA values showed good linearity from 173 to 979 mmol/mol (9.4%–54.9%) across the assay range. The GA reference range in 262 healthy subjects was between 183 and 259 mmol/mol (9.9%–14.2%), while that of subjects with diabetes was 217–585 mmol/mol (11.8–32.6%). The reagent was stable for two months on the bench at room temperature. The limits of blank, detection, and qualification were 6.9, 7.9, and 9.7 μmol/L for GA concentration, and 3.8, 7.0, and 21.8 μmol/L for albumin concentration, respectively. Hemoglobin slightly affected the assay, while other classical interfering substances had no significant impact.

The authors conclude that the Lucica Glycated Albumin-L assay is traceable to standard reference materials, shows excellent performance, and could be a useful diagnostic test for the intermediate-term monitoring of glycemic control in patients with diabetes. The study was published on May 20, 2022 in the Journal of Clinical Laboratory Analysis.