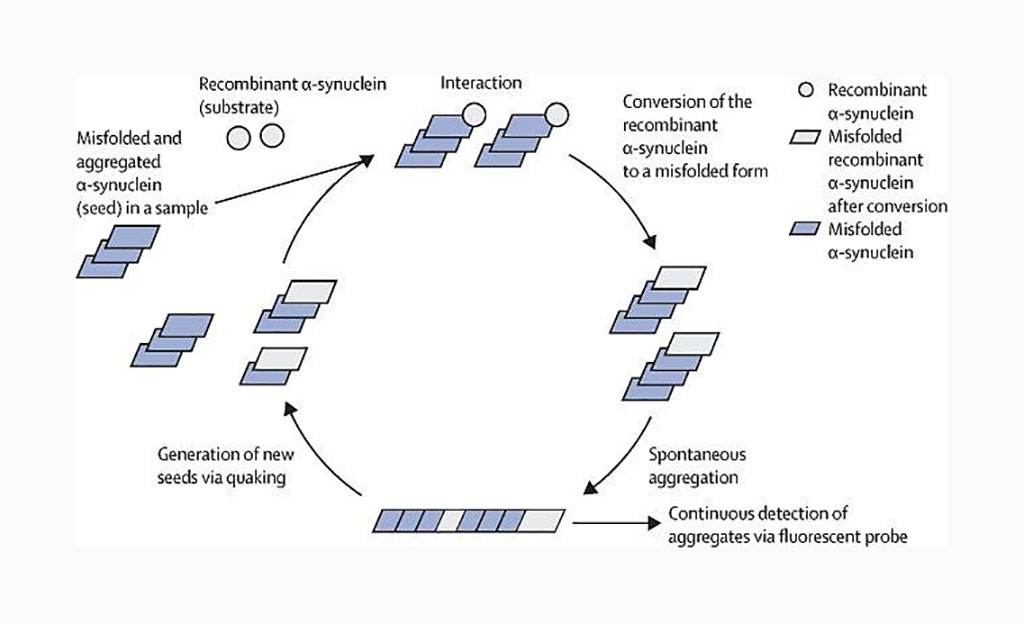 Real-time quaking-induced conversion (RT-QuIC) analysis of cerebrospinal fluid (CSF) has high sensitivity and specificity for the detection of misfolded α-synuclein in patients with Parkinson's disease and dementia with Lewy bodies.

An international team of Neuroscientists working with the University of Edinburgh (Edinburgh, UK) obtained CSF samples by lumbar puncture from patients with video polysomnography-confirmed IRBD recruited at a specialized sleep disorders center in Barcelona, Spain, and from controls free of neurological disease. There were 52 patients with IRBD and 40 healthy controls matched for age, sex and duration of follow-up underwent lumbar puncture between March 23, 2008, and July 16, 2017. CSF samples were stored until analyzed using RT-QuIC.

The average interval for people who were alpha-synuclein positive at baseline to convert to clinically defined Parkinson's or dementia with Lewy bodies was 3.2 years. Patients with IRBD who were α-synuclein negative had lower risk for developing Parkinson's disease or dementia with Lewy bodies at 2, 4, 6, 8, and 10 years of follow-up than patients with IRBD who were α-synuclein positive. During follow-up, none of the controls developed an α-synucleinopathy.

Alison Green, PhD, a Reader in Biochemistry and a senior author of the study, said, “The detection of pathological α-synuclein preceded the development of clinical symptoms by a mean of 3.2 years, with a range of 6 months to 9 years. This is the first step towards having a reliable biomarker for early, pre-symptomatic disease which will enable therapeutic interventions, including potential neuroprotective treatments, to start in a timelier manner.”

The authors concluded that in patients with IRBD, RT-QuIC detects misfolded α-synuclein in the CSF with both sensitivity and specificity of 90%, and α-synuclein positivity was associated with increased risk of subsequent diagnosis of Parkinson's disease or dementia with Lewy bodies. Detection of α-synuclein in the CSF represents a potential prodromal marker of Parkinson's disease and dementia with Lewy bodies. The study was published on March 1, 2021 in the journal Lancet Neurology.