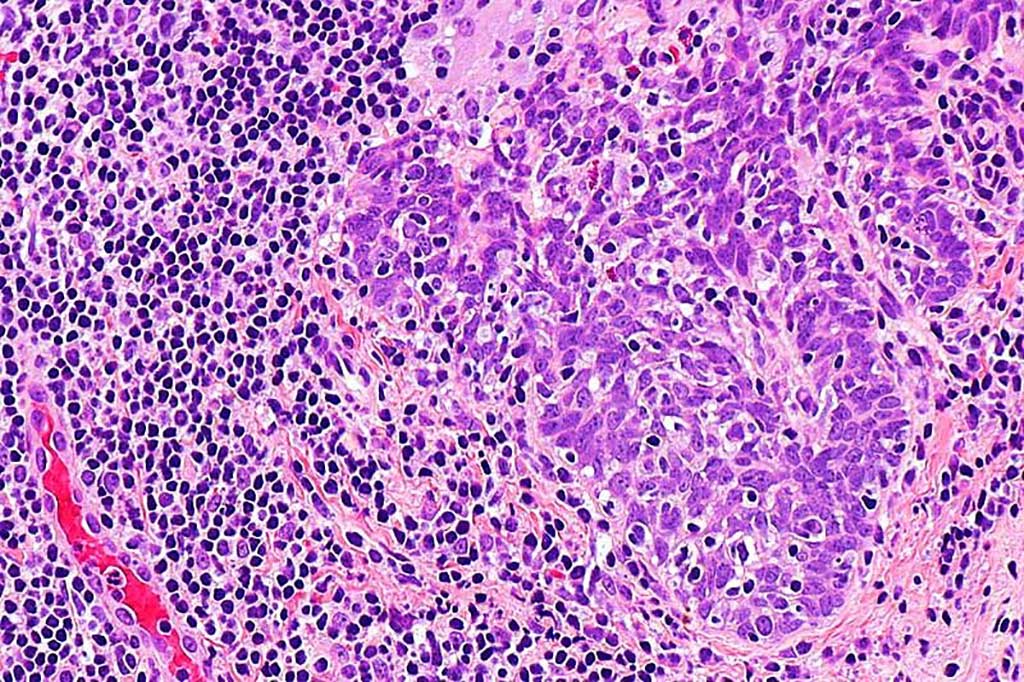 Image: Photomicrograph of histology of a poorly differentiated squamous cell carcinoma (SCC) that is p16 positive (Photo courtesy of Nephron).
Human papillomavirus infection (HPV infection) is an infection caused by human papillomavirus (HPV), a DNA virus from the Papillomaviridae family. About 90% of HPV infections cause no symptoms and resolve spontaneously within two years.

Human papillomavirus-positive oropharyngeal cancer (HPV-positive OPC or HPV+OPC), is a squamous cell carcinoma of the throat caused by the human papillomavirus type 16 virus. Detection of a tumor suppressor protein, known as p16, is commonly used to diagnose an HPV associated OPC.

Oncologists at the Catalan Institute of Oncology (Barcelona, Spain) retrospectively analyze clinical features and outcomes in relation to p16 and HPV status in more than 7,700 individuals with oropharyngeal cancer enrolled in 13 cohorts from sites in nine European or North American countries. HPV and p16 were measured by immunohistochemistry (IHC) and the HPV DNA in situ hybridization (ISH) assay, respectively which can identify clusters of oropharyngeal cancers that appear to be at intermediate risk of recurrence or death compared to tumors that are p16-positive and HPV-positive and those lacking both markers.

IHC profiling is a sensitive approach for picking up p16, a surrogated marker for HPV, albeit with reduced specificity, since that host protein sometimes has enhanced expression even in the absence of HPV infection. On the other hand, the DNA ISH test is less sensitive, since it depends to some extent on the viral load, though it is also far more specific for finding risky HPV strains. Based on analyses done at a centralized site, the team classified 416 cases as p16-positive and HPV-negative, while 279 individuals with oropharyngeal cancer had p16-negative tumors testing positive for HPV by DNA ISH. The remaining patients included 3,598 with p16-negative and HPV-negative tumors and 3,409 cases classified as positive for both markers.

Nearly 90% of the p16-negative, HPV-negative cancers occurred in smokers, compared to a smoking rate of 62% in the patients with p16-positive, HPV-positive tumors. Notably, the cases showing discordant p16 and HPV marker status had smoking history in between these two groups. The team also saw a range of treatment interventions, including an uptick in surgeries and palliative care in the p16- and HPV-negative cases, followed by cases with HPV but not p16. When the investigators looked at overall survival in the biomarker-defined groups of stage III or IVa/b, locally advanced oropharyngeal cancer cases, they found that significantly more patients with p16- and HPV-positive tumors were alive after five years, whereas outcomes were more dire for the p16- and HPV-negative cases.

Miren Taberna, MD, a clinical oncologist and senior author of the study, said, “Using p16 staining alone, 11% of oropharyngeal cancer patients would be incorrectly classified as HPV-related, suggesting incorrect prognostic conclusions could be drawn from p16 testing alone, which would potentially place these patients in a de-escalation group inappropriately.” The study was presented at the European Society for Medical Oncology's Virtual Congress held in September 2020.