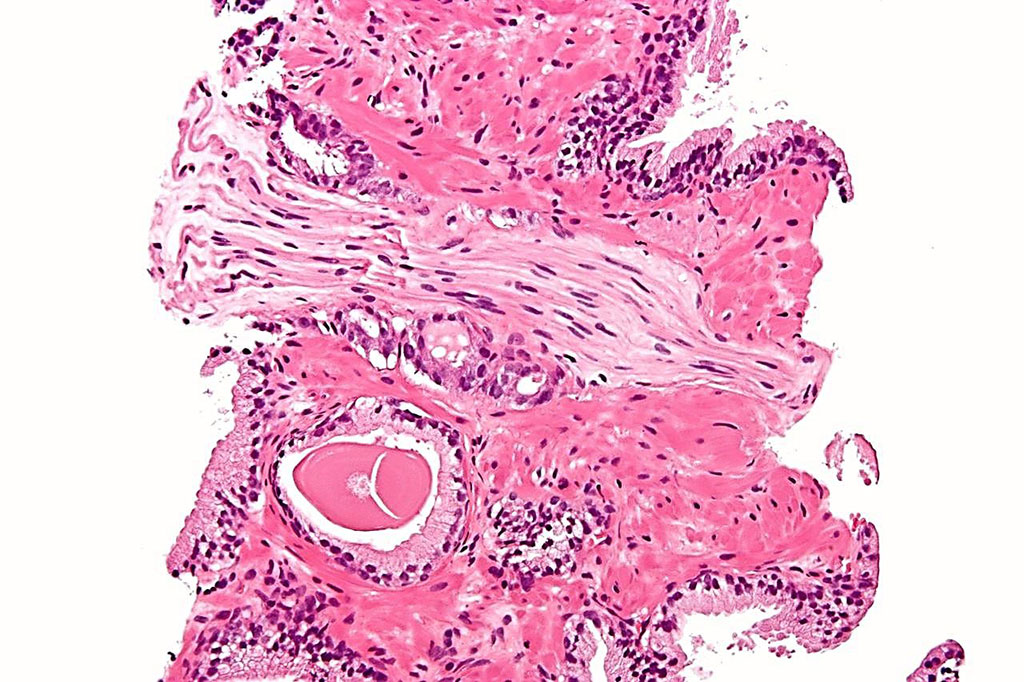 Image: Photomicrograph of a histological biopsy of a prostatic adenocarcinoma, conventional (acinar) type, the most common form of prostate cancer (Photo courtesy of Nephron).
Prostate cancer is a frequently occurring type of cancer, but not always aggressive: more men die with prostate cancer than from prostate cancer. However, its treatment has many consequences for the quality of life of patients, so determining aggressiveness is an important step in choosing a treatment.

To determine the aggressiveness of the cancer, biopsies are taken from the prostate, which are scored by a pathologist. This 'Gleason score' is then used to classify biopsies into five groups - the Gleason Grade Groups - which indicate the risk of dying from prostate cancer. However, this is a subjective process; whether and how a patient is treated may depend on the pathologist who assesses the tissue.

A team of scientists from the Radboud University Medical Center (Nijmegen, The Netherlands) developed an AI system that examines those biopsies the same way a pathologist does. The AI system also determines the Gleason score, and then the system can classify a biopsy according to the Gleason Grade Groups. By means of deep learning, the system examined thousands of images of biopsies to learn what a healthy prostate is, and what more or less aggressive prostate cancer tissue looks like. A semi-automatic labeling technique was used to circumvent the need for manual annotations by pathologists, using pathologists' reports as the reference standard during training. The system was developed to delineate individual glands, assign Gleason growth patterns, and determine the biopsy-level grade.

The investigators collected 5,759 biopsies from 1,243 patients. The developed system achieved a high agreement with the reference standard and scored highly at clinical decision thresholds: benign versus malignant (area under the curve 0.99), grade group of 2 or more (0.978), and grade group of 3 or more (0.974). In an observer experiment, the deep-learning system scored higher (kappa 0.854) than the panel (median kappa 0.819), outperforming 10 of 15 pathologist observers. On the external test dataset, the system obtained a high agreement with the reference standard set independently by two pathologists (quadratic Cohen's kappa 0.723 and 0.707) and within inter-observer variability (kappa 0.71).

The authors concluded that their automated deep-learning system achieved a performance similar to pathologists for Gleason grading and could potentially contribute to prostate cancer diagnosis. The system could potentially assist pathologists by screening biopsies, providing second opinions on grade group, and presenting quantitative measurements of volume percentages. The study was published on January 8, 2020 in the journal The Lancet Oncology.

Gestational diabetes mellitus (GDM) is a common pregnancy complication affecting 6%–15% of pregnancies globally. Although the condition resolves after delivery in most cases, women with a history of GDM... Read more

Addition of the inflammatory biomarker IL-6 (interleukin-6) to a standard panel of tumor markers was found to enchance immunodiagnosis of ovarian cancer. Ovarian cancer is one of the most common gynaecologic... Read more