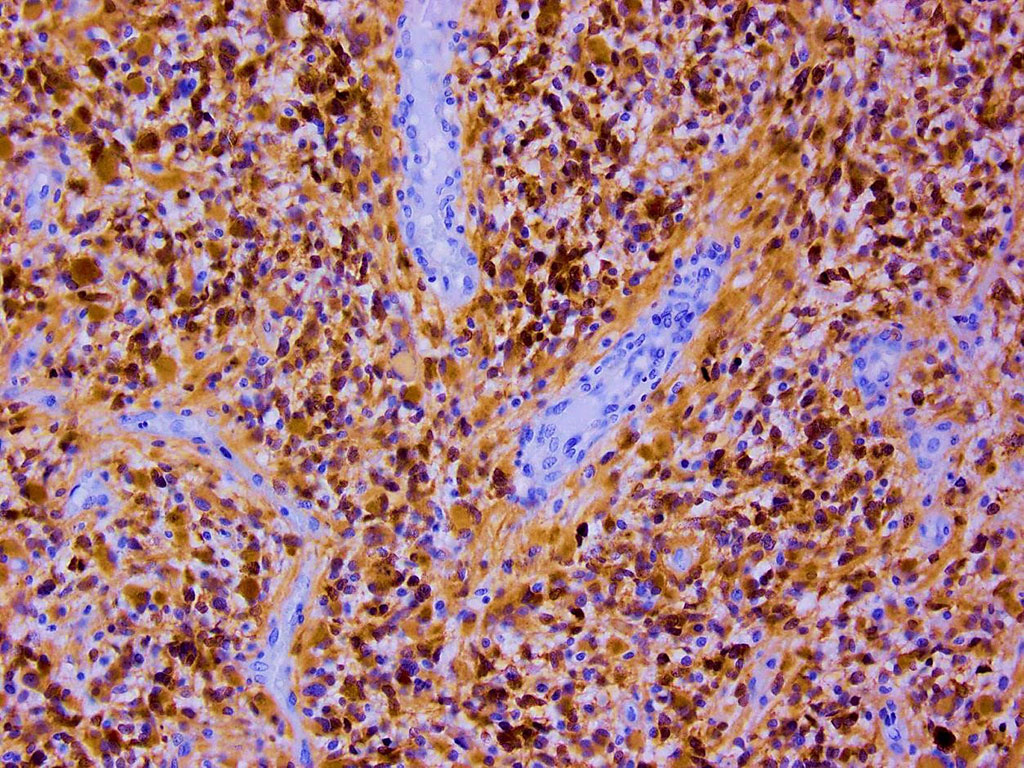 Image: Immunohistochemistry showing expression of mutated IDH1 protein in glioblastoma using a monoclonal antibody targeting the IDH1 R132H mutation (Photo courtesy of Marvin 101)
Until relatively recently, cancer was viewed as a single disease with sub-types based on where in the body it arose. The advent of detailed molecular analysis has shown that the situation is far more complicated, however, and that there can be many sub-clonal cell populations even within a single tumor.

The most common malignant brain tumor in adults, diffuse glioma, is also one of the most difficult cancers to treat. It invariably relapses despite surgical, radiotherapeutic and/or chemotherapeutic interventions. But while the initial molecular characteristics have been well described in gliomas, their subsequent evolution under treatment stress remains unknown.

A large international team of scientists working with the Jackson Laboratory for Genomic Medicine (Farmington, CT, USA) selected high quality tumor samples representing the three major subtypes of diffuse glioma from 222 patients at two time points each, which they characterized as initial and recurrence. The analyses demonstrated the highly variable nature of gliomas, but provide a framework for effective study of glioma evolution and treatment response. They analyzed temporally separated DNA-sequencing data and matched clinical annotation from the adult patients with glioma.

Among the interesting findings was that when glioma cells are stressed by cancer therapies such as radiation and chemotherapy, they don't evolve in a consistent manner. There are common features between patient samples, such as hypermutation, a very high rate of mutation in the genome, and aneuploidy, in which entire chromosomes are lost or acquired through cell division dysfunction. But following early events that drive cancer initiation and progression, their evolution often appears to be random instead of proceeding down predictable paths.

Treatment with alkylating agents resulted in a hypermutator phenotype at different rates across the glioma subtypes, and hypermutation was not associated with differences in overall survival. Acquired aneuploidy was frequently detected in recurrent gliomas and was characterized by isocitrate dehydrogenase (IDH) mutation but without co-deletion of chromosome arms 1p/19q, and further converged with acquired alterations in the cell cycle and poor outcomes.

The team also assessed how immune activity can shape glioma evolution. Immunotherapy, which uses the body's own immune system to target and eliminate cancer cells, is an exciting new field, and understanding immune interactions in the tumor microenvironment and the nature of glioma immune evasion is an important step for possible implementation. They also showed that immune activity (immunoediting) doesn't vary in glioma over time, though there were patient-to-patient differences, and more work is needed to fully understand the variability and what immunotherapy strategies might be most effective for gliomas.

Roel Verhaak, PhD, a professor and computational cancer biologist and a senior author of the study, said, “More data are needed to fully understand glioma evolution, but the Glioma Longitudinal Analysis (GLASS) Consortium resource provides an excellent foundation to more effectively study both evolution and treatment response. Collectively, these findings will help us determine what treatment approaches will result in the greatest removal or killing of glioma cells possible.” The study was published on November 20, 2019 in the journal Nature.