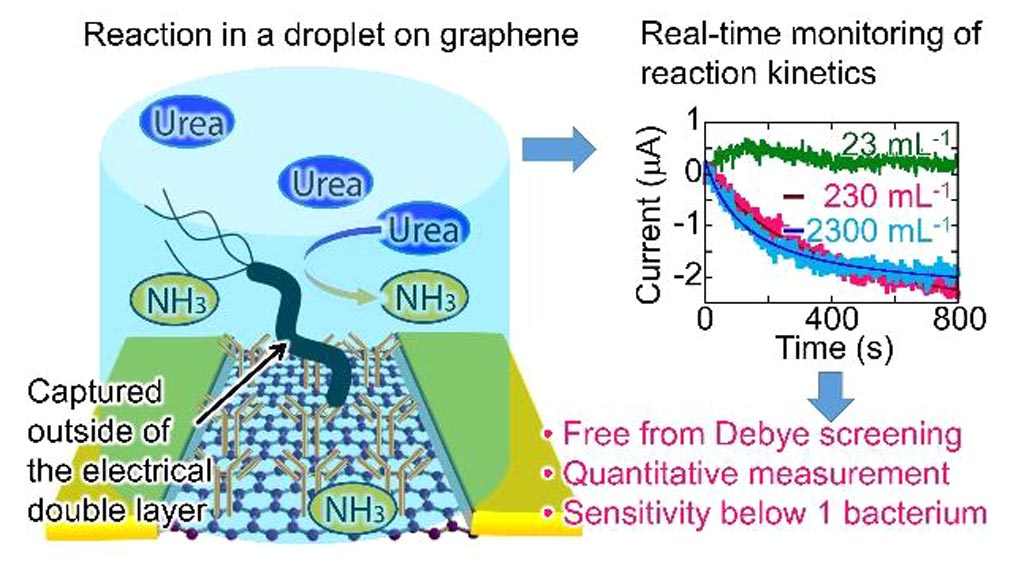 Image: An illustration of a bacterial detection by the G-FET device (Photo courtesy of Osaka University).
A team of Japanese researchers developed a graphene-based field-effect transistor and used it to detect the gastric cancer pathogen Helicobacter pylori in fluid microdroplets.

Graphene is an allotrope of carbon in the form of a two-dimensional hexagonal lattice in which one atom forms each vertex. It is the basic structural element of other allotropes, including graphite, charcoal, carbon nanotubes, and fullerenes. At one atom thick, graphene is the thinnest material known to man and is also one of the strongest, being approximately 200 times stronger than steel. It is an excellent conductor of heat and electricity and has interesting light absorption properties.

Investigators at Osaka University (Japan) coated micro sized sheets of graphene with specific antibodies to create highly sensitive graphene-based field effect transistors (GFETs) for use as biosensors and chemical sensors. Due to the two-dimensional structure of graphene, along with its physical properties, GFETs offer increased sensitivity, and reduced instances of false positives responses in sensing applications.

To use a GFET to detect bacteria, the investigators faced a peculiar physical limitation. The measurable range from the graphene surface is highly restricted by Debye screening, with characteristic length less than one nanometer at physiological ionic strength. This screening effect prevented the graphene sheet from being affected by binding of bacteria to the antibody coating.

To overcome the Debye screening limitation, the investigators introduced a way to monitor chemical reactions generated by the bacteria in the presence of reagents added by microfluidics to a droplet of liquid. The low molecular weight chemicals produced in the reactions were able to penetrate the Debye screen and reach the graphene surface. Electrical signals built up on the graphene surface due to these reactions were used to calculate the number of bacteria in the droplet.

The investigators demonstrated that they could achieve quantitative measurements of a target based on the site-binding model and real-time measurement of enzyme kinetics in femtoliter (10 x -15 liter or a cubic microliter) microdroplets.

The combination of a G-FET and microfluidics, called by the investigators a “lab-on-a-graphene-FET”, detected the enzyme urease with high sensitivity in the zeptomole (one 10 x -21th part of a mole, or about 600 molecules) range in 100 millimolar sodium phosphate buffer. Furthermore, the lab-on-a-graphene-FET detected the gastric cancer pathogen Helicobacter pylori captured at a distance greater than the Debye screening length from the G-FET.

"Our biosensor is essentially a mini laboratory on a graphene FET. This sensor demonstrates how two-dimensional materials such as graphene are getting closer to being applied in practical medical and healthcare applications," said first author Dr. Takao Ono, an assistant professor in the institute of scientific and industrial research at Osaka University.

The use of the G-FET device to detect H. pylori was described in the June 12, 2019, issue of the journal ACS Nano Letters.