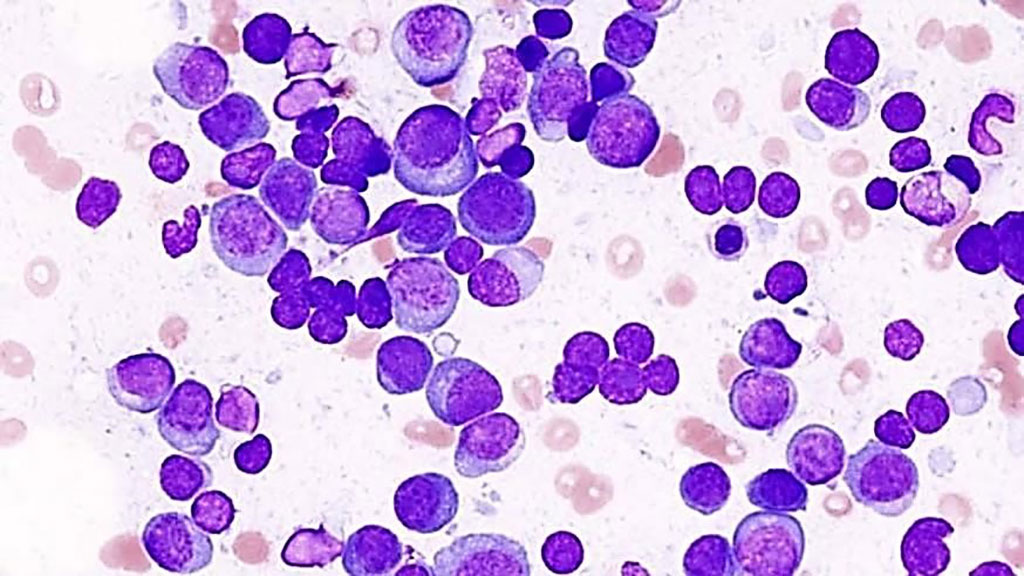 Image: Photomicrograph of multiple myeloma in a smear preparation of a bone marrow aspirate (Photo courtesy of the Institute of Cancer).
Multiple myeloma is a cancer that forms in a type of white blood cell called a plasma cell. Plasma cells help you fight infections by making antibodies that recognize and attack germs. Multiple myeloma causes cancer cells to accumulate in the bone marrow, where they crowd out healthy blood cells.

The team's analyses uncovered expression-based clusters representing nine types of immune cells including CD16+ or CD14+ monocytes, natural killer cells, B cells, and T cells. In the early stages of multiple myeloma, for example, the single-cell transcriptome data pointed to an uptick in natural killer cell representation in the immune microenvironment, together with chemokine receptor expression changes.

The investigators also picked up other immune changes, from a decline in certain memory cytotoxic T cells and enhanced interferon signaling by multiple immune cell types to altered regulation of monocyte immune cells with effects on T cell activity. They went on to confirm some of the immune microenvironment changes in mouse models of early multiple myeloma, in vitro cell line experiments, and phenotyping profiles for bone marrow samples from more than a dozen individuals with or without multiple myeloma or a precursor condition.

The scientists reported that major histocompatibility complex class II dysregulation in CD14+ monocytes, which results in T-cell suppression in vitro. These results provide a comprehensive map of immune changes at play over the evolution of premalignant MM, which will help develop strategies for immune-based patient stratification. The study was published on April 27, 2020 in the journal Nature Cancer.