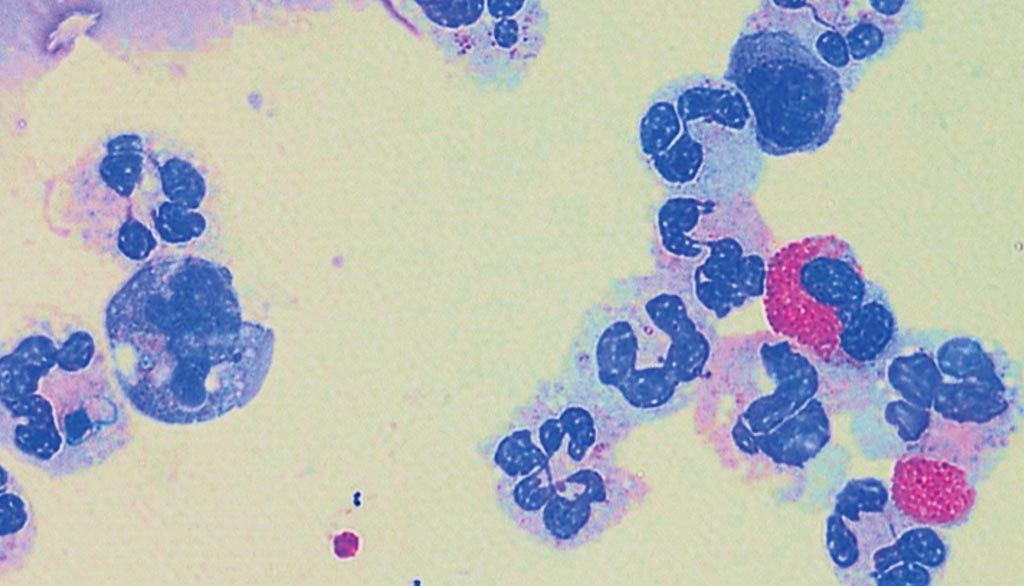 Image: A representative photomicrograph of bronchial lavage (BL) cytospin of obstructive airway disease participants Subsets of neutrophils characterized as per number of lobes in their nucleus (Photo courtesy of University of Newcastle).
Neutrophils are phagocytic innate immune cells, which patrol the blood vessels and become activated in response to inflammatory triggers. Activation results in neutrophil migration to the site of infection, where pathogens can be eliminated by phagocytosis or NETosis.

Scientists at the University of Newcastle (Callaghan, Australia) and their associates recruited adults who were undergoing bronchoscopy either for medical purposes or were undergoing a surgical procedure that involved endotracheal intubation and had spirometry results. Participants included 78 adults with obstructive airway disease comprised of 39 with stable asthma, 20 with COPD and 19 diagnosed as bronchiectasis and 20 healthy controls.

Spirometry was performed using an Easy One Spirometer. Flexible bronchoscopy was performed and a fraction of the bronchial lavage (BL) was sent for microbial detection while the rest was processed. The BL was centrifuged and the cell pellet was resuspended in phosphate buffered saline to the concentration of 1×106/mL and cellular cytospins were prepared. The cytospins were stained with May-Grünwald Giemsa and a differential cell count of 400 non-squamous cells was performed.

The authors concluded that the presence of three morphologically different subsets of neutrophils in the airways of healthy and obstructive airway disease participants, that is, asthma, COPD and bronchiectasis. The increased proportion of hypersegmented neutrophils in the airways of obstructive airway disease participants was associated with reduced lung function of these participants. The proportion of hypersegmented neutrophils was highest in COPD participants in comparison to all other groups. The study was published on January 28, 2019, in the journal BMJ OPEN.