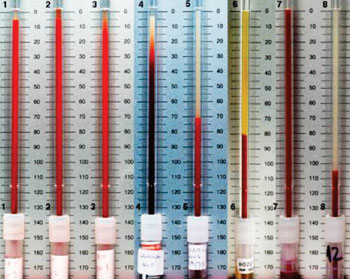 Many patients who see physicians for sinus infections expect to be prescribed an antibiotic, but for the majority of them, that course of treatment will not be effective. Unfortunately, there are not great diagnostic tools to determine which patients will or will not benefit from antibiotics.

Medical scientists at the University of Georgia (Athens, GA, USA) analyzed 30 studies of outpatients with a respiratory tract infection to see which diagnostic criteria, if any, were most accurate for diagnosing sinus infection. These included studies of adults and children with clinically suspected sinusitis or acute respiratory tract infection that reported the accuracy of at least one blood test or imaging study for ARS or acute bacterial rhinosinusitis (ABRS). Acceptable reference standards included radiography, ultrasound, computed tomography (CT), or magnetic resonance imaging (MRI) for ARS, and antral puncture revealing purulent fluid or fluid yielding a positive culture for ABRS.

Blood tests studied included C-reactive protein (CRP), white blood cell count (WBC), and the erythrocyte sedimentation rate (ESR), and other tests included rhinoscopy, a test of nasal secretions, and the accuracy of scintigraphy. An ESR of greater than 10 is limited evidence against a diagnosis of acute rhinosinusitis, while an ESR of greater than 30 or 40 provide moderate evidence in favor of the diagnosis. Similarly, a CRP of less than 10 mg/L was limited evidence against a diagnosis of ARS while a CRP of greater than 20 mg/L is limited evidence in favor of the diagnosis. Only one of the four studies of CRP used antral puncture as the reference standard, and it had generally similar results to the imaging studies.

The authors concluded that in general, tests were of limited value in the diagnosis of ARS. Normal radiography helps rule out sinusitis when negative, whereas CRP and ESR help rule in sinusitis when positive, although, given their limited accuracy as individual tests, they cannot be routinely recommended. Prospective studies integrating signs and symptoms with point-of-care CRP, dipstick, and/ or handheld B-mode ultrasound are needed.

Mark H. Ebell, MD, a professor and lead author of the study said, “The use of C-reactive protein is promising as a point of care test to reduce the overuse of antibiotics. There have been several studies in Europe showing that in the primary care setting, having the CRP results that show a patient is unlikely to have bacterial sinusitis, doctors are more confident about not using antibiotics and they've reduced inappropriate antibiotics use.” The study was published on September 1, 2016, in the British Journal of General Practice.