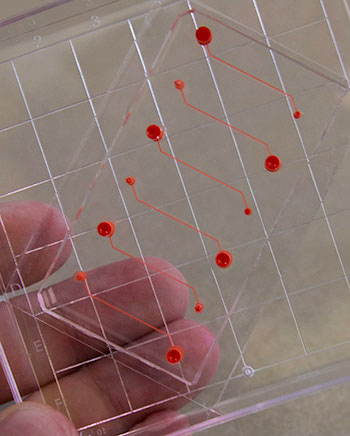 Image: The new device emulates the interface between the endothelium and circulating blood, opening new doors to diagnosing blood clotting diseases caused by dysfunction or inflammation of endothelial cells, which line all blood vessels and influence the process of hemostasis (Image courtesy of the Wyss Institute at Harvard University).
Researchers have developed a microfluidic device with fixed endothelial cells to mimic cellular and vascular flow conditions inside a patient’s body, which could help monitor blood clot formation, diagnose effectiveness of anti-platelet therapy, and prevent dysfunctional hemostasis.

When in dysfunction, the vascular endothelium (tissue that lines the blood vessels) plays a major role in the development of many diseases because endothelial cells are sensitive to blood flow and interact with blood cells through surface molecules. In normal hemostasis, the endothelium prevents life-threatening blood loss and clot formation, but dysfunction or inflammation may result in aberrant blood coagulation leading to blockages or hemorrhage.

The crucial interface between endothelial cells and circulating blood has not been replicated in a practical diagnostic device due to the challenge of incorporating living endothelial cells into a robust testing tool. In the new study, a Wyss Institute team led by Prof. Ingber has discovered that endothelial cells need not be “living” in order to confer their effects on blood coagulation. By microengineering tiny hollow channels lined by chemically fixed human endothelial cells that mimic cellular and vascular flow conditions inside a patient’s body, a new device developed by the team could monitor blood clot formation and diagnose effectiveness of anti-platelet therapy.

This blood coagulation diagnostic can even be used to study the effects of endothelial inflammation on the formation of blood clots, which is highly relevant in patients suffering from atherosclerosis.

"This is one of the first examples of how a microfluidic cell culture system could have added value in clinical diagnostics,” said study co-author Andries van der Meer, PhD, former Wyss Institute postdoctoral fellow, now assistant professor at University of Twente, The Netherlands, “Using chemically fixed tissue that is no longer alive offers a clear, low-risk path toward further testing and product development."

A previous study by Prof. Ingber and team showed that recreating the physicality and blood flow of vasculature within microfluidic channels allowed them to predict precise times that blood might clot, with potential applications in real-time monitoring of patients receiving intravenous anticoagulants in order to prevent complications such as stroke and vascular occlusion. The new device adds another layer of complexity by embedding the functionality of the vascular endothelium within a diagnostic tool that might be manufactured, stored, and shipped for clinical use, which was not considered possible.

"Our efforts to mimic the vascular system in a meaningful way within a microfluidic device has led to two avenues of technology development," said Prof. Ingber, "Together they represent a new suite of physiologically relevant microdevices."

The study, by Jain A et al, was published online July 27, 2016, in the journal Biomedical Microdevices.