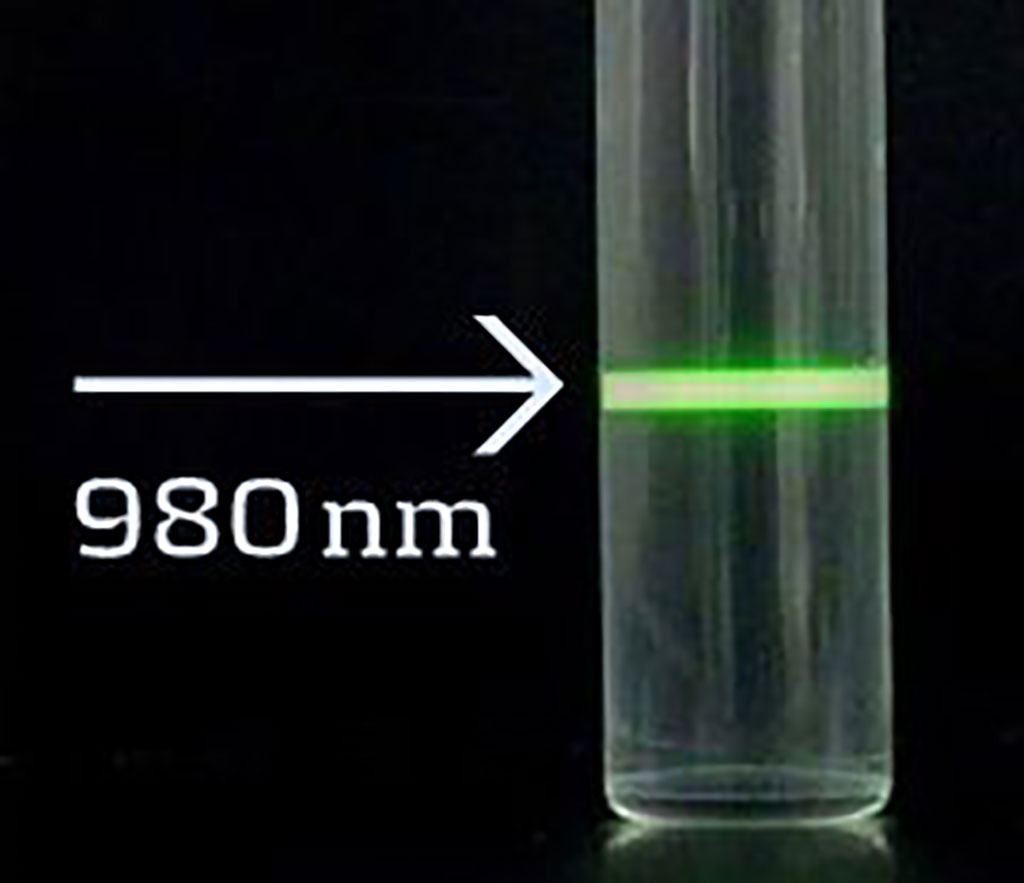 Image: Upconverting nanoparticles: With the combination of NIR-excitation (980 nanometers) and detection at a lower wavelength, the autofluorescence from biological samples is totally eliminated, and the particles are detectable through tissue sections and even in whole blood (Photo courtesy of Kaivogen Oy)
A radically modified lateral flow immunoassay was able to detect the ovarian cancer biomarker glycosylated CA125 in serum samples and rapidly differentiate epithelial ovarian cancer from benign endometriosis and healthy controls.

Cancer antigen 125 (CA125) is a widely used biomarker for monitoring epithelial ovarian cancer (EOC). Due to insufficient cancer specificity of CA125, its diagnostic use is severely limited. However, abnormal glycosylation of CA125 is a unique feature of ovarian cancer cells and detection of this biomarker could improve differential diagnosis of the disease.

In this regard, investigators at the University of Turku (Finland) sought to develop a quantitative lateral flow immunoassay (LFIA) to detect aberrantly glycosylated CA125, which would be superior to the conventional CA125 immunoassay for diagnosing EOC.

The inadequate clinical performance of traditional LFIAs has restricted the use of these assays for the detection of tumor biomarkers. Commonly, a LF strip consists of a nitrocellulose membrane, sample pad, conjugate pad, and absorbent pad, all laminated on a plastic backing card and placed in a plastic housing. Currently available LFIAs are either qualitative or semi-quantitative assays often with limited sensitivity. The detection method is usually based on visual interpretation of colloidal gold or colored nanoparticle reporters. Moreover, subjective visualization of test results has always been a major concern that could lead to false results.

Generally, fluorescent reporters provide superior sensitivity to colloidal gold and allow quantification of analytes. Among fluorescent reporters, crystalline lanthanide-doped parameterized particles (upconverting nanoparticles or Upcon nanoparticles) such as those produced by the biotech company Kaivogen Oy (Turku, Finland) are characterized by minimal auto-fluorescence background, resistance to photobleaching, and the ability to detect minute concentrations of biomarkers in biological samples. These unique features, which are based on the near-infrared excitation and anti-Stokes shifted luminescence, assure a successful implementation of Upcon nanoparticles in point-of-care diagnostics. The low-cost of infrared laser light source enabled the development of inexpensive portable readers, such as that produced by Labrox Oy (Turku, Finland).

In the current study, the investigators employed the Upcon nanoparticles quantitative LFIA for aberrantly glycosylated CA125 together with the Labrox Oy portable test reader. They found that with a 30 minute read-out time, the LFIA showed 72% sensitivity, at 98% specificity using diagnostically challenging samples with marginally elevated CA125 (35–200 U/milliliter), in comparison to 16% sensitivity with the classical CA125 LFIA.

"The received results are extremely promising for early cancer diagnostics. We are currently studying the functionality of similar approaches in other cancers. Detecting the disease as early as possible is extremely important when it comes to, for example, pancreatic cancer," said senior author Dr. Kim Pettersson, professor of biochemistry at the University of Turku.

The assay for glycosylated CA125 was described in the August 21, 2020, online edition of the journal Communications Biology.