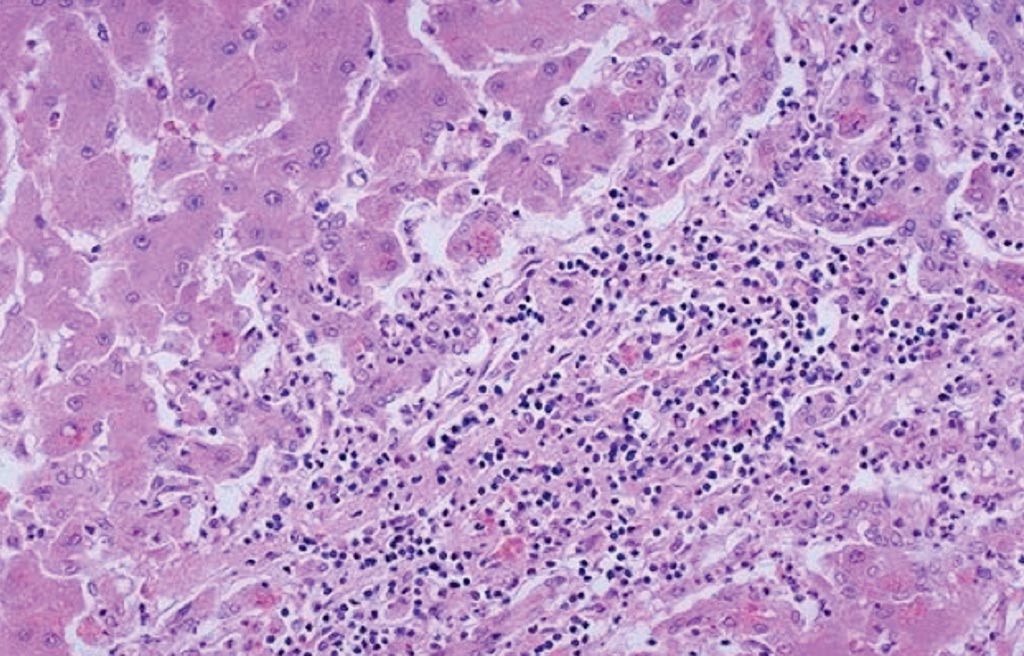 Image: A histopathology of hepatocellular carcinoma: a mononuclear inflammatory cell infiltrate extends from portal areas and disrupts the limiting plate of hepatocytes which are undergoing apoptosis, the so-called interface hepatitis of chronic active hepatitis. In this case, the hepatitis B surface antigen (HBsAg) and hepatitis B core antibody (HBcAb) were positive (Photo courtesy of University of Utah Medical School).
Viral infection with either hepatitis C virus (HCV) or Hepatitis B virus (HBV) is the chief cause of liver cancer in the world today, accounting for 80% of hepatocellular carcinoma (HCC). The viruses cause HCC because massive inflammation, fibrosis and eventual cirrhosis occurs within the liver.

Liquid biopsies, based on cell free DNA (cfDNA) and proteins, have shown the potential to detect early stage cancers of diverse tissue types. However, most of these studies were retrospective, using individuals previously diagnosed with cancer as cases and healthy individuals as controls.

A large team of scientists working with the Chinese Academy of Medical Sciences (Beijing, China) and Genetron Health (Beijing, China) developed a liquid biopsy assay, named the hepatocellular carcinoma screen (HCCscreen), to identify HCC from the surface antigen of hepatitis B virus (HBsAg) positive asymptomatic individuals in the community population. The team followed more than 300 individuals with hepatitis B who had normal liver ultrasonography and serum α-fetoprotein (AFP) levels to see if the test could identify those who would go on to be diagnosed with hepatocellular carcinoma (HCC).

The authors reported that a training cohort consisted of individuals who had liver nodules and/or elevated serum (AFP) levels, and the assay robustly separated those with HCC from those who were non-HCC with a sensitivity of 85% and a specificity of 93%. They further applied this assay to 331 individuals with normal liver ultrasonography and serum AFP levels. A total of 24 positive cases were identified, and a clinical follow-up for 6 to 8 months confirmed four had developed HCC. No HCC cases were diagnosed from the 307 test-negative individuals in the follow-up during the same timescale. The assay showed 100% sensitivity, 94% specificity, and 17% positive predictive value in the validation cohort. Notably, each of the four HCC cases was at the early stage (<3 cm) when diagnosed.

The authors concluded that their study provides evidence that the use of combined detection of cell-free DNA (cfDNA) alterations and protein markers is a feasible approach to identify early stage HCC from asymptomatic community populations with unknown HCC status. The study was published on March 11, 2019, in the journal Proceedings of the National Academy of Sciences.