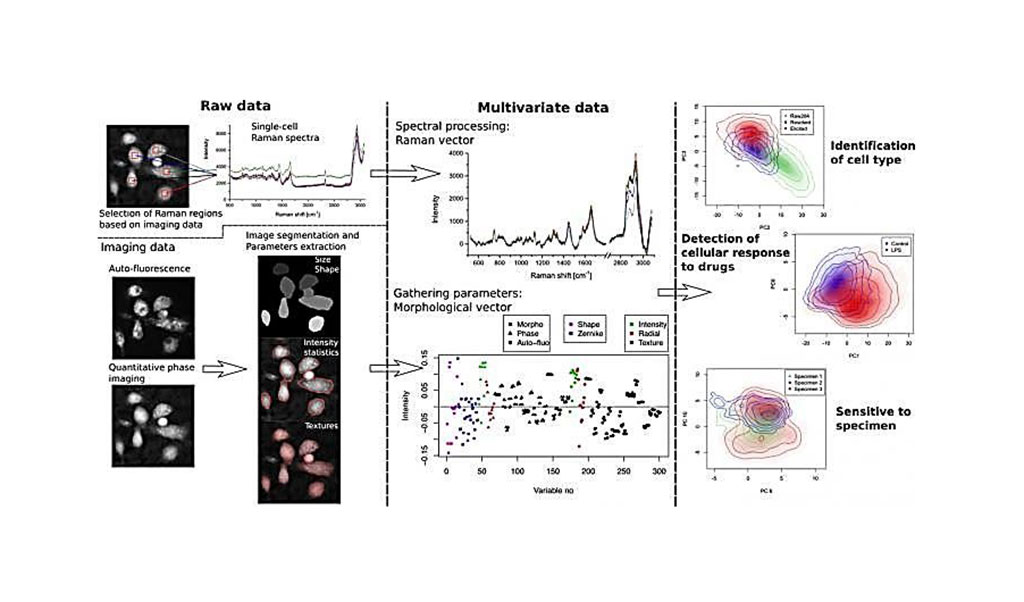 Image: Methods of extracting features from label-free immune cell analysis. Multivariate label-free data, composed of both morphological and spectral parameters, are used to identify high-level features at the single-cell level such as cellular type, response to drugs, as well as response differences between specimens (Photo courtesy of Osaka University)
Measurement techniques that allow the global analysis of cellular responses while retaining single-cell sensitivity are increasingly needed in order to understand complex and dynamic biological processes.

Cells have numerous traits that can be used to identify them: genetic, epigenetic, behavioral, compositional, or morphological features can all be used to define the phenotype of a given cell. As the discrimination capabilities of measurement systems improve, newly defined cell sub-types can emerge.

Scientists at the Osaka University (Osaka, Japan) developed a label-free multimodal imaging platform that enables the study of cell cultures non-invasively without the need of any contrast agent. The pair showed how the label-free signals can be employed to create models that can detect the activation state of macrophage cells and distinguish between different cell types even in the case of highly heterogeneous populations of primary cells.

The tests composed of three cell types and two conditions (Control and LPS) yield six main sets of controlled conditions where measurements have been approximately evenly distributed between them. To understand how uncontrollable variability might affect the results, the measurements are performed over several days, with cells plated onto different dishes to account for differences in cell culture, where 200–400 cells are measured per dish. The team combined the imaging information from quantitative phase imaging (QPI) recorded with off-axis holography and auto-fluorescence (AF), along with Raman spectroscopy, to retrieve single-cell level indicators enabling the analysis of cellular responses and conditions.

The team then developed generalized statistical tools to assess the influence of both controlled (cell sub-populations, immune stimulation) and uncontrolled (culturing conditions, animal variations, etc.) experimental parameters on the label-free biomarkers. These indicators can detect different macrophage cell sub-populations originating from different progenitors as well as their activation state, and how these changes are related to specific differences in morphology and molecular content. The molecular indicators also display further sensitivity that allow identification of other investigational conditions, such as differences between cells originating from different animals, allowing the detection of outlier behavior from given cell sub-populations. The study was published on November 19, 2019 in the journal Scientific Reports.