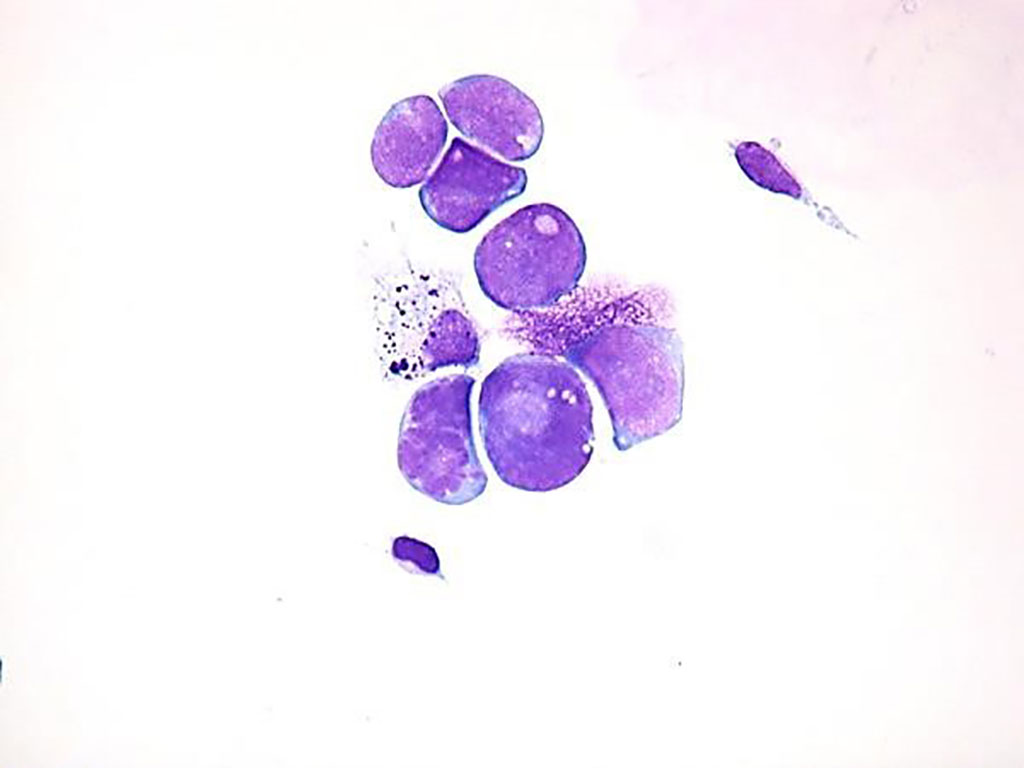 Image: Small round blue tumor cells found in the CSF of a patient with leptomeningeal disease from rhabdomyosarcoma (Photo courtesy of Pediatric Oncology)
Leptomeningeal disease (LMD) is a devastating complication of solid and liquid systemic and central nervous system malignant neoplasms. LMD, in which cancer metastasizes to the cerebrospinal fluid, occurs in 4% to 15% of cancer patients and is associated with poor survival, with untreated patients dying within four to six weeks.

Leptomeningeal disease is typically diagnosed via identification of malignant cells in cerebrospinal fluid (CSF), most commonly obtained via lumbar puncture or ventriculoperitoneal (VP) shunt access. CSF cytological analysis. The currently most reliable diagnostic method, has a sensitivity of approximately only 75% and is known to produce persistently negative results in approximately 10% of patients.

A large team of Neuro-oncologists at the Massachusetts General Hospital (Boston, MA, USA) and their colleagues conducted a diagnostic study to assess the use of genomic sequencing of CSF samples obtained from 30 patients with suspected or confirmed LMD from 2015 through 2018 to identify tumor-derived cfDNA. This study consisted of two patient populations: 22 patients with cytologically confirmed LMD without parenchymal tumors abutting their CSF and eight patients with parenchymal brain metastases with no evidence of LMD.

Priscilla K. Brastianos, MD, Assistant Professor of Medicine and a co-senior author of the study, said, “If we are able to confidently diagnose LMD using cell-free DNA earlier and with fewer invasive procedures, then we can institute treatment sooner and enroll patients in clinical trials for new LMD treatments. The ultimate hope is that we can improve patient survival with earlier diagnosis and treatment for this deadly disease.”

The authors concluded that the diagnostic study found improved sensitivity and accuracy of cfDNA CSF testing versus cytological assessment for diagnosing LMD with the exception of parenchymal tumors abutting CSF, suggesting improved ability to diagnosis LMD. The study was published on August 9, 2021 in the journal JAMA Network Open.