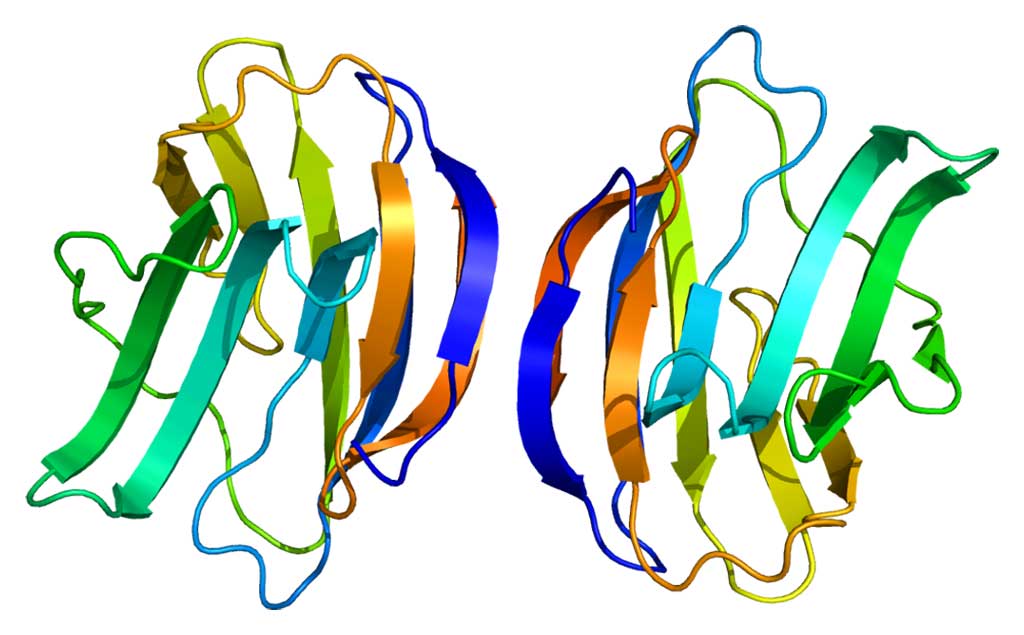 Image: Molecular model of the galectin-1 protein (Photo courtesy of Wikimedia Commons)
Increased concentration of the beta-galactoside-binding protein “galectin-1” in sera from human sepsis patients has been found to be a novel biomarker for cytokine storms that may occur in cases with runaway sepsis.

Cytokine storms form during sepsis due to the overreaction of the body to an infection. Cells damaged as a result of infection or injury release cytokines and other danger molecules called alarmins that can generate a cytokine storm.

Investigators at the University of Connecticut (Storrs, USA) and their colleagues sought to the determine the identity and function of individual DAMPs released in response to cytosolic lipopolysaccharide (LPS).

Galectin-1 release is a common feature of inflammatory cell death and galectin-1 promotes inflammation and plays a detrimental role in LPS-induced lethality. The investigators found that sepsis patients had higher levels of galectin-1 than those found in non-sepsis critical care patients or in healthy individuals. On the molecular level, galectin-1 inhibition of CD45 (Protein tyrosine phosphatase, receptor type, C) seemed to be the cause of its unfavorable role in promoting cytokine storms.

The galectin-1 study was published in the January 4, 2021, online edition of the journal Nature Immunology.