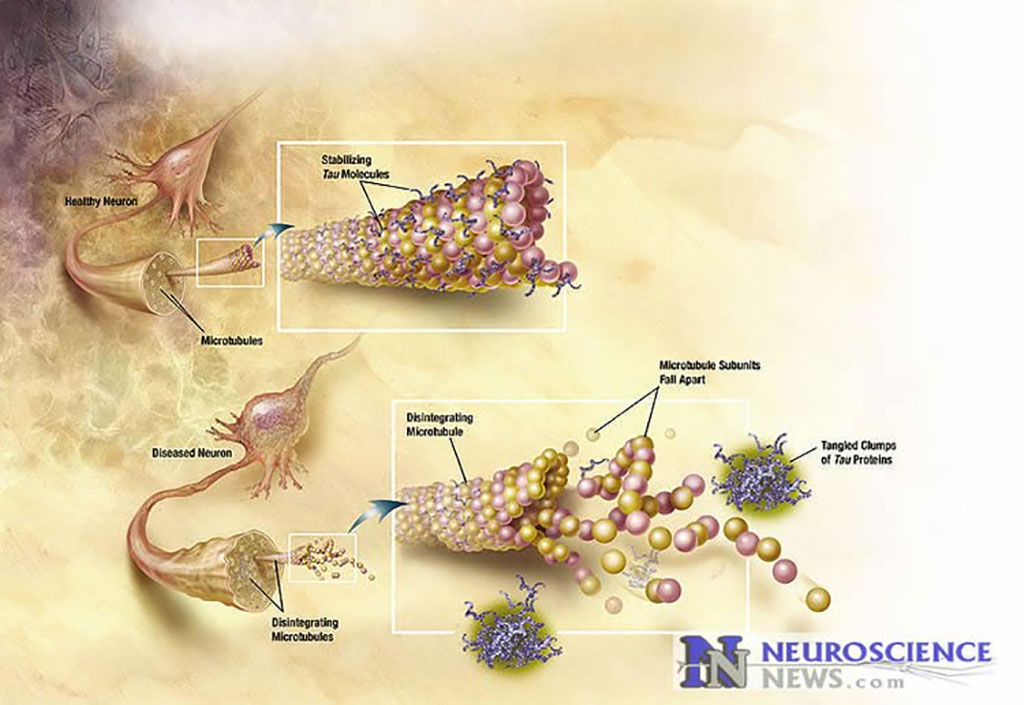 Image: Tau proteins are a group of six highly soluble protein isoforms, which have help maintain the stability of microtubules in the axons and neurons of the central nervous system (Photo courtesy of NeuroscienceNews.com)
A team of neurodegenerative disease researchers found that higher levels of N-terminal fragment of tau (NT1) in blood samples taken at the beginning of a survey of clinically normal elderly individuals were strongly associated with future risk of cognitive decline and progression to Alzheimer's disease.

The tau proteins are a group of six highly soluble protein isoforms produced by alternative splicing from the MAPT (microtubule-associated protein tau) gene. They have roles primarily in maintaining the stability of microtubules in axons and are abundant in the neurons of the central nervous system (CNS). They are less common elsewhere but are also expressed at very low levels in CNS astrocytes and oligodendrocytes. Pathologies and dementias of the nervous system such as Alzheimer's disease (AD) and Parkinson's disease are associated with tau proteins that have morphed into hyperphosphorylated insoluble aggregates called neurofibrillary tangles. While immunoassays targeting N‐terminal and mid‐region p‐tau181 and p‐tau217 fragments have been available, tools for monitoring levels of NT1 have only recently been developed.

Investigators at Brigham and Women's Hospital (Boston, MA, USA) measured plasma concentrations of NT1 in a large, well-characterized cohort of clinically normal elderly, who were participants in the Harvard Aging Brain Study (HABS). The 236 cognitively normal participants in the study averaged 74 years of age when they entered HABS and were followed for an average of five years. Blood samples were collected in the first year.

Results revealed that plasma NT1 levels at study entry (when all participants were unimpaired) were highly predictive of future cognitive decline, pathological tau accumulation, neurodegeneration, and transition to a diagnosis of mild cognitive impairment (MCI) or AD. These predictive effects were particularly strong in participants with even modestly elevated brain beta-amyloid burden at study entry. For the group with the highest NT1 levels, the risk of advancing to MCI or AD dementia was 2.4-fold, suggesting plasma NT1 levels captured very early cognitive, pathologic, and neurodegenerative changes along the path to AD.

Imaging data showed that higher baseline NT1 blood levels were associated with elevated brain levels of beta-amyloid plaques and the accumulation of tau tangles. Furthermore, NT1 was found to be a stronger predictor of cognitive decline than neurofilament light chain (NfL).

"Our findings indicate that measuring a tau fragment in plasma can help predict which elderly people are likely to decline and how quickly they are likely to decline," said senior author Dr. Dennis Selkoe, professor of neurologic diseases at Brigham and Women's Hospital. "We are excited because there are currently no commercially available blood tests to predict risk of AD in still-healthy individuals. Having such a blood test allows us to better screen people for enrollment in AD prevention trials and represents progress toward diagnostic tests for AD in medical care. The NT1 tau fragment may be a reflection of damage to neurons and synapses, allowing us to use blood samples to detect what is happening in a patient's brain years before they begin experiencing symptoms. This could give us an invaluable window of time in which to evaluate interventions for preventing cognitive decline and AD dementia."

The NT1 study was published in the November 27, 2020, online edition of the journal Nature Communications.