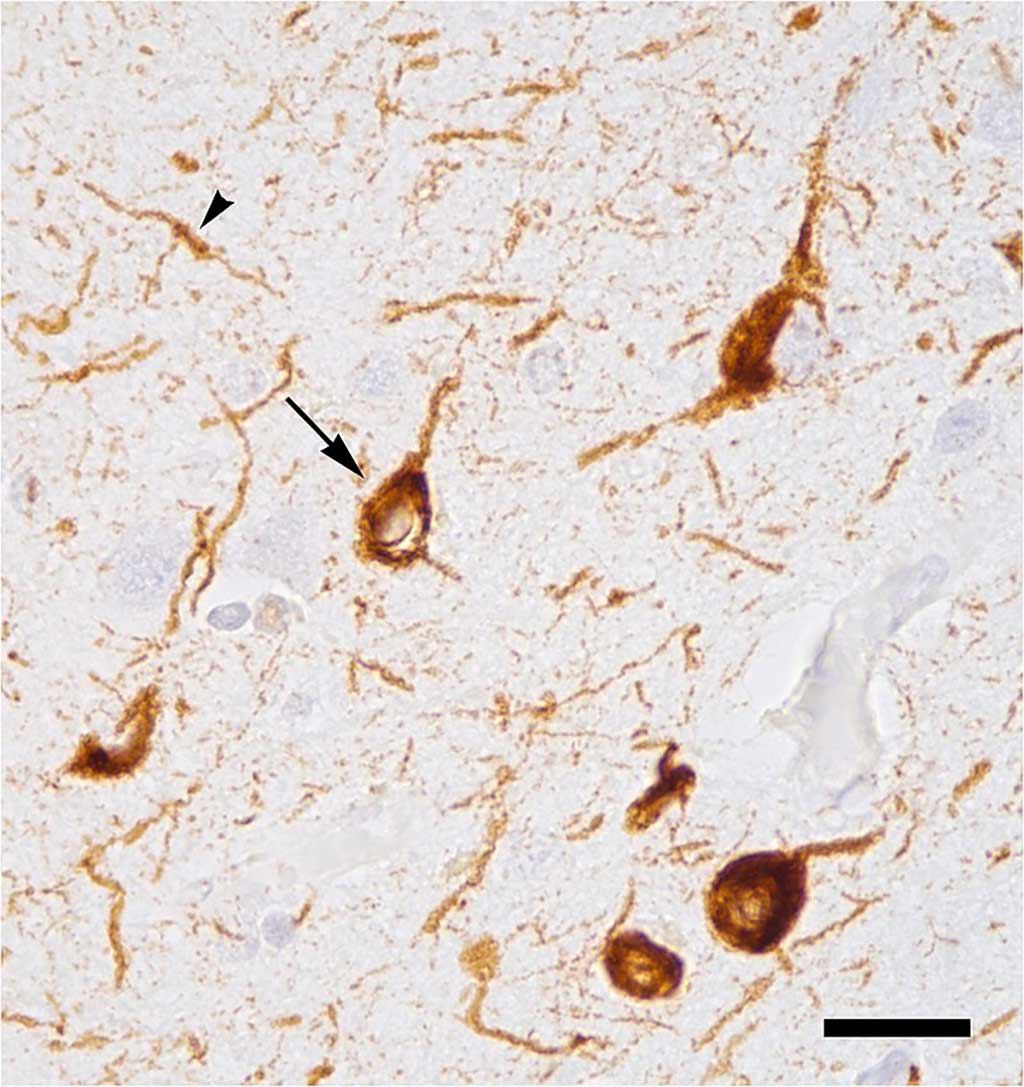 Image: Abnormal accumulation of tau protein in neuronal cell bodies (arrow) and neuronal extensions (arrowhead) in the neocortex of a patient who had died with Alzheimer`s disease (Photo courtesy of Wikimedia Commons)
Determination of some specific types of phosphorylated tau proteins enables detection of Alzheimer’s disease before development of cognitive impairment.

The tau proteins are a group of six highly soluble protein isoforms produced by alternative splicing from the MAPT (microtubule-associated protein tau) gene. They have roles primarily in maintaining the stability of microtubules in axons and are abundant in the neurons of the central nervous system (CNS). They are less common elsewhere but are also expressed at very low levels in CNS astrocytes and oligodendrocytes. Pathologies and dementias of the nervous system such as Alzheimer's disease (AD) and Parkinson's disease are associated with tau proteins that have morphed into hyperphosphorylated insoluble aggregates called neurofibrillary tangles. Novel immunoassays targeting N‐terminal and mid‐region p‐tau181 and p‐tau217 fragments are available, but head‐to‐head comparison in clinical settings is lacking.

Results revealed that about a third of the people evaluated had evidence of Alzheimer’s brain pathology but without any cognitive problems. Nonetheless, the novel p-tau markers correctly identified these emerging abnormalities measured in cerebrospinal fluid and regular blood samples.

Senior author Dr. Kaj Blennow, professor of neurochemistry at the University of Gothenburg, said, "A possible way to improve the chances of future therapies is to test them on people in the very early stages of the disease with elusive biological changes but lacking clinical symptoms including memory failings. Candidate drug trials have not been too successful. The practical challenge, however, is that these very tiny initial changes are incredibly difficult to measure reliably. This compromises our chances to identify and recruit preclinical AD patients for clinical trials."

The phosphorylated tau study was published in the November 30, 2020, online edition of the journal Alzheimer's & Dementia: The Journal of the Alzheimer's Association.